The importance of the import acceleration phase: an ally against the crisis

Knowing the accelerating import phase of a product in a certain market is a significant growth driver, and an ally in combating downward economic trends

In analyzing and selecting a target market, the ability to identify those markets that are at an accelerating stage in the import of a given product turns out to be an activity of high strategic value. This aspect takes on added relevance in light of the global economic phase in which we find ourselves. The international scenario, marked by the uncertainty of war and increases in commodity prices, in fact, returns us to a veritable "kaleidoscope" of markets, for which the prospects for import growth also turn out to be highly differentiated from area to area and sector to sector.

As already introduced in the article "Measuring demand potential: big data for market selection", intercepting the acceleration stage of a product in a country allows the company to "seize the moment" and experience a rapid increase in its sales. Moreover, an additional aspect to consider is that often seizing such phenomena allows one to equip oneself with resilient tools even in an environment of unfavorable country-related economic dynamics, as demonstrated by some of the case studies below.

Polish imports and the Great Recession

At the dawn of the Great Recession, the Polish economy was experiencing a period of rapid and significant development of its economy, with very positive growth rates uninterrupted since the turn of the century (see graph below).

However, if we take into consideration a few accelerating products in the Polish market during the period under analysis, such as sausages and coffee, it becomes evident how they have actually managed to maintain an upward, or at least constant, trend even during the most intense periods of crisis, showing a definite resilience to a non-positive environment. 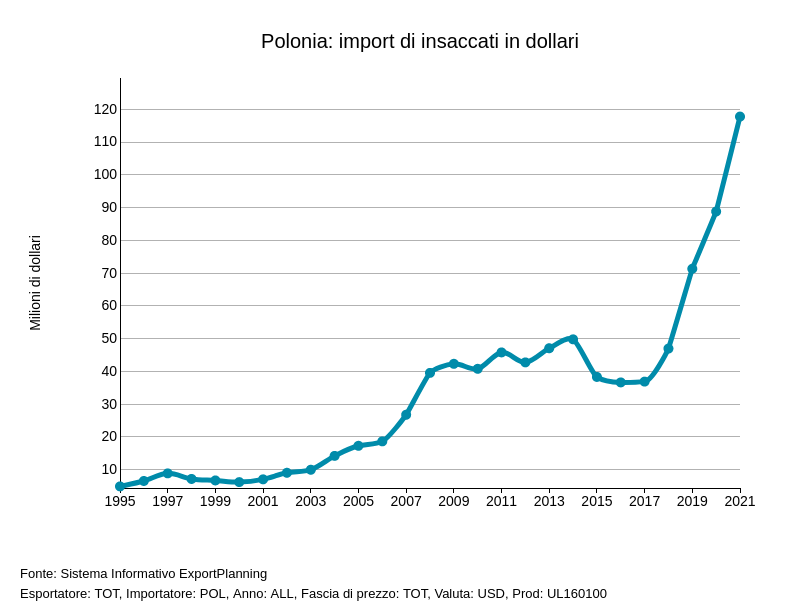 The result also appears to be in sharp contrast to the aggregate Food of belonging, which despite being a notoriously anti-cyclical industry, showed a -12 percent drop between 2008 and 2009. The products presented also showed a strong and steady growth dynamic up to the most recent days, except for a relative stability that characterized the years 2014-2019.
Indeed, both sausages and coffee are confirmed as extremely attractive products for the Polish market.

A second particularly significant example is the Chinese market. Here we focus on the Chinese crisis that originated with the Shanghai Stock Exchange crash in June 2014 and affected the Chinese economy in 2015-2016 after a period of particularly strong growth, as shown in the graph below.

Again, weak GDP performance translated into a fall in the country's imports throughout the three-year period.

However, analyzing the case of handbags, it can be seen that not only has there not been a falling effect related to the macroeconomic environment, but that on the contrary, the good appears to be increasingly in demand in the market, to be still in a phase of very strong acceleration, culminating in a level of imports almost reaching 4.5 billion euros in 2021 (see the following graph).

Particularly interesting turns out to be the fact that demand for the product has not fallen even in the most recent crisis phases, such as the pandemic, making handbags one of the most attractive products for the Dragon country.

In light of the above and the current international scenario, the strategic value of the Import Development Stage indicator for a product in a given market appears even higher. Capturing the acceleration stage appears to be a very significant demand driver, so much so that, in some cases, it can mitigate-or even eliminate-the negative effects of unfavorable business cycles or world trade difficulties.