The investment cycles of the mechanical industry in the world

The last cycle, started in 2017 and already interrupted, could quickly resume in response to positive events such as the overcoming of the tariff war.

Most economic indicators point to a slowdown in the global economy. There is general agreement that growth in the first part of 2019 will be significantly lower compared to economy and world trade growth over the last two years. In this situation, it becomes particularly useful to identify the factors behind the current slowdown, classifying them in one of these large categories: uncertainty and industry-specific demand cycle.
Indeed, if the factors underlying the slowdown are mainly linked to uncertainty, then it is possible that, in response to positive events, the slowdown phase will be short. On the other hand, if the possible global slowdown is due to the conjunction of the final phase of demand cycles of several markets (car market, building market, etc.), then it would be unlikely to register a sudden inversion.

This article analyzes the state of the world demand cycle of mechanical industry machines.
The mechanical industry has a significant weight in all industrialized contries. It is at the same time a producer and user of machines. This made its cycles deep for the transmission speed of growth pulses.
The following chart shows the global demand for mechanical industry machinery, from 1995 to today. Demand was measured at constant prices (2010 dollars), to eliminate the effects due to price changes and isolate the quantity effects. 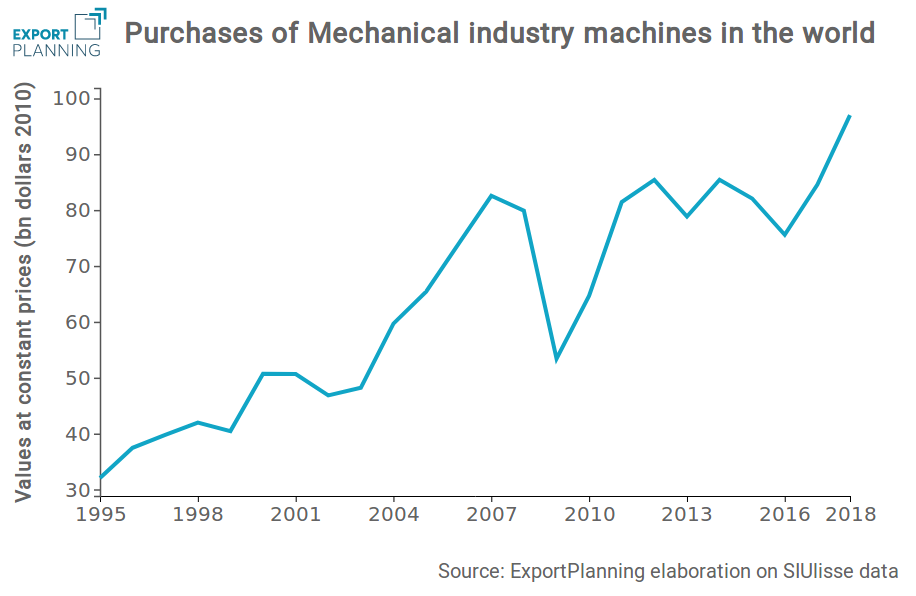 From the analysis of the graph you can notice that:

From the Great Recession to 2017, no particular cyclical phases can be identified. In this long period, the growth in the demand for mechanical products has determined only an increase in the capacity utilization, and not an increase in the productive capacity too.
The first estimates for 2018, based on available conjunctural data, indicate the start of a new cycle between 2017 and 2018, probably already interrupted in the second part of 2018. This scenario is confirmed by the market analysis of some types of machines, such as machine tools (see, for example, the Cecimo economics and statistical toolbox for the 2nd quarter of 2018.)

If this analysis is correct and if the factors, underlying the current climate of uncertainty, quit, then the investment cycle could recover quickly, at least in the mechanical industry.
We believe that in the coming months the United States and China will find an agreement to overcome the tariff war, as result of the strong complementarity in the industrial structure of the two countries (see Imbalances in US and China foreign trade). In this case the economic cycle could regain momentum in the final part of 2019, relegating the deepest slowdown phase between the summer of 2018 and that of 2019.

With the availability of the new SARS-CoV-2 vaccine, China has rapidly become the second largest supplier to low-income economies [ Read all ]