Brexit and the US-China trade war have generated a climate of unprecedented economic uncertainty, which could however quickly fade away.

World economic growth is slowing down

The PMI indices are the most evident and most up-to-date measure of the slowdown in the global economy. The chart below shows the PMI index for the United States, for Euro area and for China. All three indices have been significantly declining in the last months. In particular, the indices relating to the Euro area and China fell below the threshold of 50. For the first time since the end of 2015, the suppliers have reported that the business activity levels is reducing. 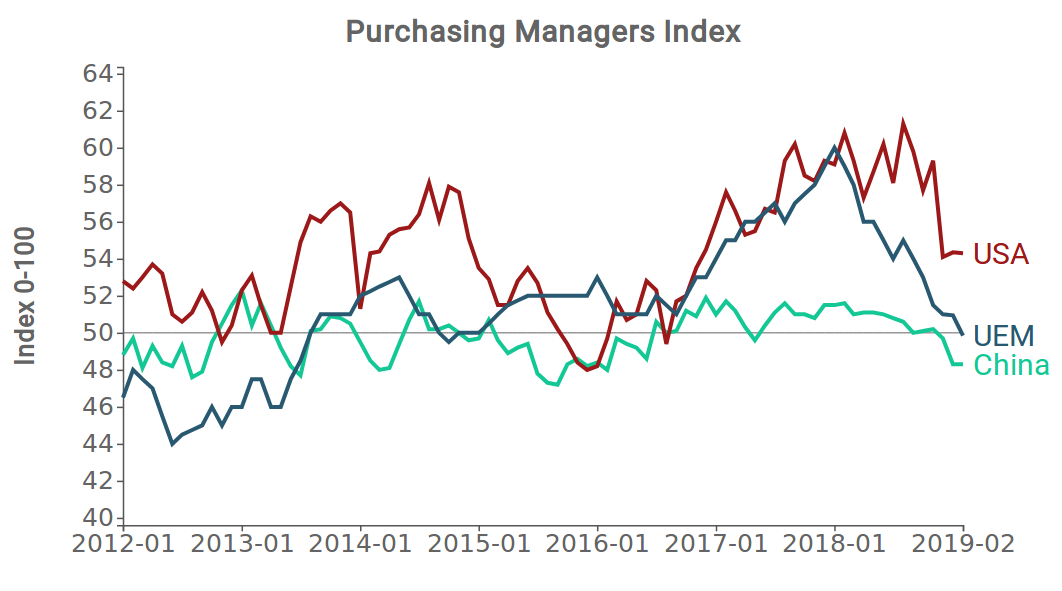 The current slowdown is anomalous. In fact, it is not the result of specific financial or economic crises, as the slowdown of 2015-2016. This latter reflected, in fact, the economic crisis of some emerging countries (Brazil and Russia) and the financial turbulence in China, signaled by the strong collapse of the Shanghai Stock Exchange in the summer of 2015 and early 2016.

The current situation is significantly different and mainly reflects the sharp increase of the climate of uncertainty on the economic policies in some countries. The Economic Policy Uncertainty (EPU) Index is an index developed by three American professors (Scott R. Baker, Nicholas Bloom, and Steven J. Davis.) and measures the climate of uncertainty. The following chart shows the levels of the index (100 = average of the years before 2011) from the end of the last century to January 2019. 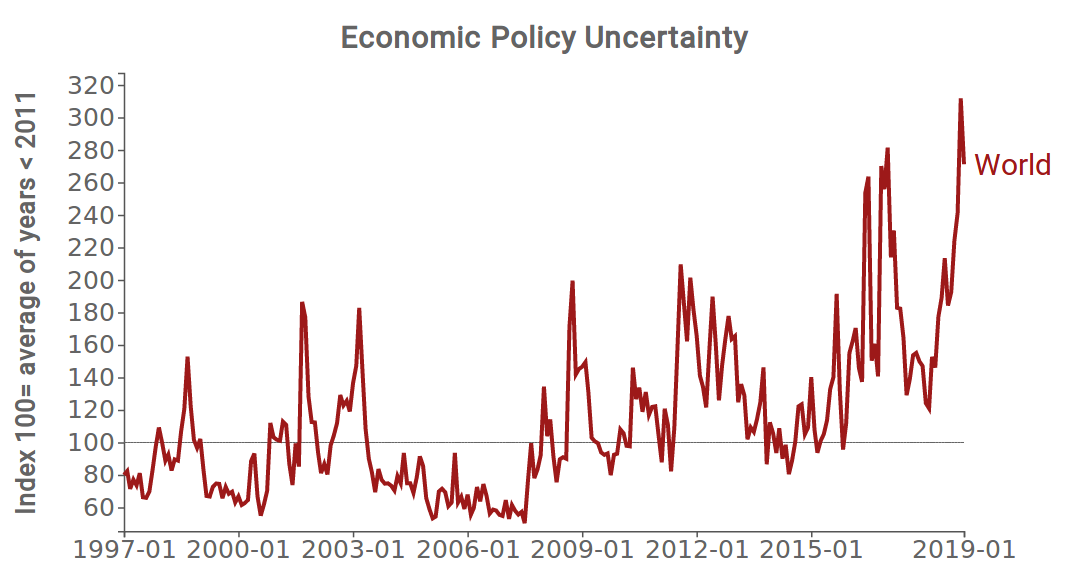 This index have shown a surge in the latest months, reaching its maximum in November 2018.
The EPU index is the result of the composition of one or more components, depending on the country in question. There are three possible components.
The first component concerns the economic uncertainty that emerges from the newspapers, considering the articles dealing with the national economic policy and signaling the elements of uncertainty. The second component examines the legal rules expected to expire within 10 years. The third component considers the dispersion of responses in surveys concerning the future evolution of the main macroeconomic variables.
If we analyze the indices of the different countries, it is clear that the US-China trade war and the Brexit are the current two main sources of uncertainty in economic policy. Even France is experiencing exceptional levels of uncertainty due to the Yellow Gilets protests.

The relative stability of commodity prices is a further element that signals this particular phase of the world economy. Analyzing the dynamics of oil prices and those of the main LME non-ferrous metals, we would observe relatively high prices, especially when compared to those of the sharpest phase of the 2016 slowdown. At the beginning of 2016, the price of oil Brent fell below $ 35 per barrel. At the end of last year, the price of Brent decreased, never below $ 55. Then, it recovered to over $ 65 in recent days. In the first part of 2016, copper , zinc and nickel also fell below 4500, 1500 and 8500 dollars for tonne, respectively. After declining in the last months of 2018, in the first two months of this year all three metals have recorded a net recovery in prices. Their prices have approached or exceeded 6500, 2700 and $ 13,000 per tonne, respectively. Also the aluminum , which fell at the end of 2015 under 1500, during the first two months of 2019 has never decreased below 1800 dollars.
The stability of financial commodity prices on much higher levels than those in 2016, points out that the slowdown in global demand has not yet translated into a significant reduction. In the first quarter of 2019 the world demand continues to grow, even if more slowly.

The world economy could quickly end the current slowdown and resume the growth path abandoned in the second half of 2018, if in the next months the United Kingdom will move towards a soft Brexit and the Us-China current negotiations will lead to stop the trade war. Both of these scenarios are highly probable.

1) The PMI (Purchasing Manager Indexes) measure the assessments of those responsible for purchases on the economic situation of their business. If the value of the index is higher than 50, it means that the average of the suppliers indicates a growth of its activity (orders, production, delivery, employment, stocks); vice versa if the value is lower than 50. The indications from these managers are particularly important because their job is to provide to buy everything that is necessary to produce, anticipating the dynamics of corporate sales.