India update: economics and geopolitics of the world's fastest-growing economy

One of the emerging markets' currencies that we have analyzed in recent months is the Indian Rupee. The weakening of the Rupee began in the spring of 2018, as a result of US rates hikes, and continued until the first days of October. After a rebound between October and November, the currency has looked quite stable since the beginning of December, fluctuating between 69 and 72 Rupees per dollar.
In recent days, the Rupee got back in the spotlight for a modest appreciation, due to a combination of both economic and geopolitical factors.

Kashmir, an area between India and Pakistan, has been the subject of a territorial dispute between the two countries for decades. In mid-February, a suicide attack killing more than 40 Indian soldiers reignited the conflict. After an escalation of tensions in the last week of February, this week the situation seems to have subsided, bringing with it a strengthening of the Indian currency.
A further element that, according to analysts, contributed to the recent strengthening of the Rupee is the foreign capital inflow in February, the highest since March 2017: the purchases made by Foreign Institutional Investors (sovereign wealth funds, pension funds, asset management ...) amounted to almost 2 billion dollars.

Despite this temporary appreciation, which spreads cautious optimism on the markets, there remain elements of risk for the Indian economy, in the medium to long term.
The issue of Kashmir proves that geopolitical risk is an element to be taken into account when dealing with emerging markets, since it can affect both country risk and exchange rate risk: as a matter of fact, the currency reflects these tensions quite often. Another element of political instability for India are the upcoming elections, which will take place this spring.
A possible source of tensions in the next future is the recent decision by the US Trade Representative to terminate the Generalized System of Preferences for India and Turkey: the program granted preferential access to the United States market for certain products.

Slowdown in GDP growth and inflation, industrial production on the rise

As regards economic factors, India does not seem to be immune to the global growth slowdown. During financial year 2018-19, year-on-year GDP growth at constant prices slowed from 8% in Q1 (which runs from April to June 2018, according to Indian National Accounts rules) to 6.6% in Q3 (October-December 2018).
Inflation has slowed down since mid-2018, as well. Provisional data for January 2019 indicate that Consumer Price Index increased by 2.05% (y-o-y), a figure close to the lower limit of the target set by the central bank. 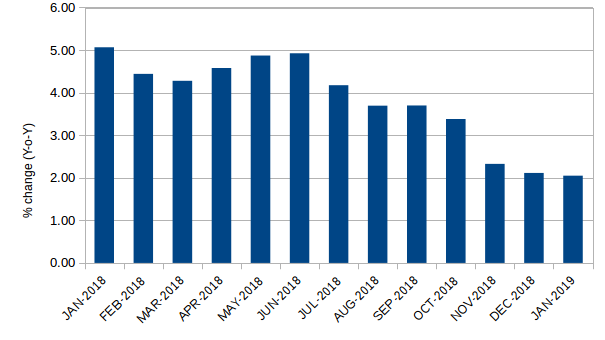 In accordance with the general economic picture, at the beginning of February the Reserve Bank of India (RBI) cut its policy repo rate by 25 basis points (the first cut since August 2017), and changed the monetary policy stance from calibrated tightening to neutral, opening the way to potential further cuts.
Nevertheless, RBI Industrial Production Index grew in December compared to the previous months, reaching its highest value since March 2018. Despite the weaknesses highlighted in the analysis, India is set to be the fastest-growing economy in 2019, according to the latest edition of the World Economic Outlook (excluding Frontiers and Least Developed Countries). For the moment, opportunities offered by the Indian market therefore seem to more than offset its risks.