The rise of the electric bicycles

Technological innovation, design and the growing awareness of environmental issues are the driving forces behind the significant growth of e-bikes.

Monitoring the international trade data makes it possible to signal the changes taking place and the new trends in global consumption, thus becoming a strategic marketing tool. For example, the analysis of foreign trade flows allows us to report a phenomenon that is in constantly and rapidly rising: the growth of electric bicycles.

The academic journal Taylor & Francis described the rapid rise of electric bicycles as “the largest and most rapid uptake of alternative fueled vehicles in the history of motorization.”

As reported by Google Trends data, the organic searches for electric bicycles are significantly increased worldwide over the last fourteen years, signaling a strong increase in international interest for this type of product.

The European imports of the product have experienced strong growth rates dynamic in recent years: between 2017 and 2018, the import of electric bikes has increased by 45%, from € 1.3 billion to € 1.9 billion (see the chart below). 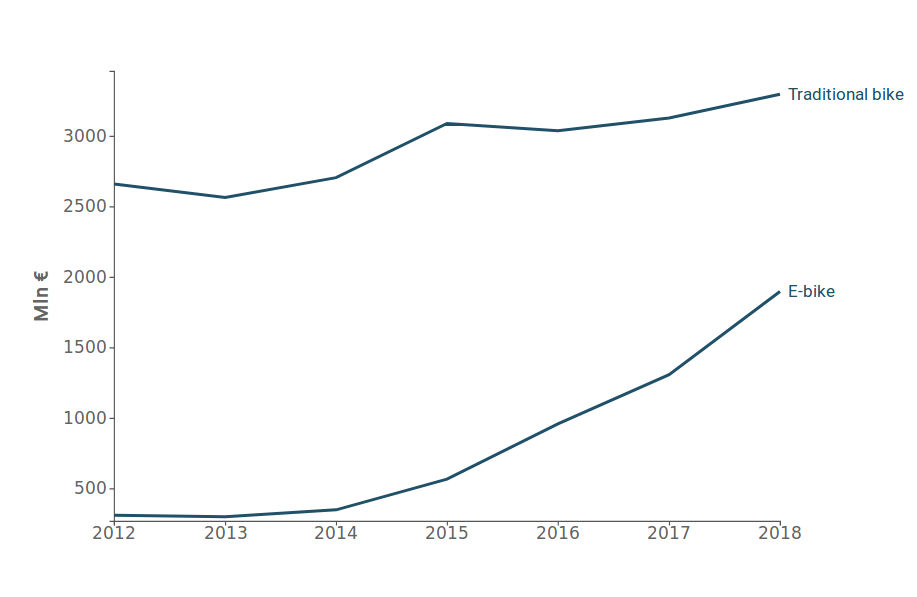 The dynamic trend just reported is manifested by electric bicycles with a power lower than 250 Watts-25 km/h. These are the classic city bikes, designed for personal mobility. Although the levels of electric bicycles are still far from those of more traditional bicycles, the electric bicycle is gradually establishing itself as a valid substitute for the more traditional two-wheeled vehicles, thanks to lower operating costs compared to scooters and being exempted from increasingly stringent emissions regulations.
In fact, the technological innovation has created electric bicycles with long-life batteries and compact and light engines and an increasingly refined design has made their use increasingly enjoyable.
The significant growth of the e-bike represents a new consumption habit which responds to the growing sensitivity towards the the environmental theme of customers.

The main European importers of the product are, in fact, countries known for a culture of environmental sustainability. For example, in Germany, Holland and Belgium, the electric bicycle is a valid means of transport for short and medium distances.

Italy has not escaped the growing interest in the electric bicycle, the imports of the country have reached the value of € 98 million in 2018. The National Statistical Office (ISTAT) has, in fact, introduced in 2019 the bike electricity within the representative consumption basket.

In the electric bicycle market, China represents a real leader on the world scene. It is in fact the main European commercial partner, characterized by an export concentrated on medium-low market segments. The strong specialization of the Asian country in a production in series of electric bicycles at highly competitive costs has been the driver of success on foreign markets; however such low prices have attracted the interest of the regulator. Last July, in fact, the European Commission imposed anti-dumping duties on imports of Chinese e-bikes, considering the Chinese pricing a threat to the local industry.

Among the Asian countries, an increasingly important role is being taken by the export of electric bicycles of Taiwan , which unlike the Chinese competitor, is placed on more rewarding market segments.
The most expensive e-bike models are currently produced in Europe, where specific regulations regarding assembly and components (like the batteries to be used) govern the sector, thus affecting the final price.

In the lighting segment, Italy and Germany do not catch the positive phase of Global Demand [ Read all ]