The Chinese currency is reflecting the latest escalation in the US-China trade war. As can be seen in the chart below, since the beginning of May the Yuan has lost almost 3% of its value against the dollar, dropping to its lowest levels since October. 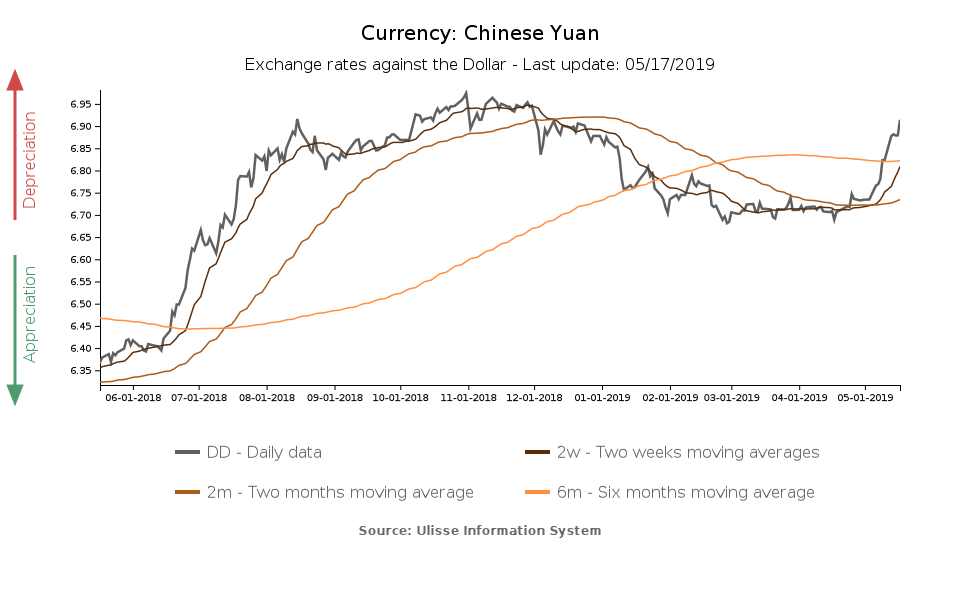 In the last few months, ongoing negotiations led to think that a potential agreement was about to be concluded. Nonetheless, the trade spat has recently seen new twists; the Yuan is tracking them in real time.
After a first phase of significant depreciation from June 2018, when the first US tariffs on China were announced, and a period of relative stability at the end of the year, between December 2018 and February 2019 the Yuan regained ground, since the prospect of an agreement looked quite concrete. The recent weakening of the Yuan can be attributed to the latest episodes of the ongoing trade war: on May 5, Trump announced a tariff hike, from 10% to 25%, on $ 200 billion worth of goods. New tariffs entered into force on May 10. The day after Trump’s announcement, Chinese stock markets collapsed and, on May 13, China announced its counteroffensive, which will come into force in June.

The key question analysts and traders are trying to answer is whether the Chinese central bank wants to use the Yuan as a trade policy tool, in order to partially recover the loss of competitiveness caused by tariffs. Many of them believe that the People's Bank of China will not let the currency depreciate beyond 7 Yuan per dollar: excessive depreciation could damage investors’ confidence, as well as lead to capital flight.
Furthermore, they believe that the currency will not be used as a weapon in the trade conflict, as long as the possibility of an agreement is still present.

Another tool that China could use in this conflict are its large US treasuries holdings: as a matter of fact, China is the largest foreign holder of US debt. As can be seen from the chart, China’s holdings of US debt decreased in the last 12 months: at the end of March 2019, the stock amounted to 1120.5 billion dollars, 70 billion less than the same period of the previous year.

Chinese holding of US treasuries

Source: StudiaBo elaborations on U.S. Department of the Treasury data.


In this context of renewed uncertainty, Japanese Yen emerges for its safe-haven role on the Asian forex market: since the beginning of May, it has appreciated by almost 2% against the dollar. On the other hand, neighboring countries’ currencies were negatively affected by trade war tensions: South Korean Won and Indonesian Rupiah respectively weakened by 2.7% and 1.4% against the greenback in May.
South Korea is the 6th largest world exporter (2018), according to StudiaBo provisional data, and China is its main trading partner; therefore, risk aversion sentiment in a trade war context penalizes its currency. In addition, latest macroeconomic data have proved to be worse than expected: the country's GDP showed a slight contraction in Q1-2019 (-0.3%, year-on-year).
This is the case for Indonesia, as well: the weakening of the currency seems to reflect not only market tensions, but also some weak macroeconomic data on the national front.