Pakistan is ready for a new IMF agreement

Pakistan is back into the spotlight. On May 12, the country reached a staff-level agreement with the International Monetary Fund for a 6 billion dollars loan over 3 years. The loan will support Pakistan’s structural reforms agenda, aimed at reducing macroeconomic imbalances and stimulating growth.

The new government, led by Imran Khan, would have preferred to avoid another loan from the Fund (the 13th loan in the last three decades). In recent months, it has therefore resorted to loans from "friendly countries" such as China, Saudi Arabia and UAE. Each of them has provided Pakistan with 3 billion dollars. Nevertheless, these funds have not proved sufficient to finance the current account deficit: after long negotiations, the country has therefore concluded an agreement with the lender of last resort.

One the main issues that weigh on the economy is its current account deficit (CAD). 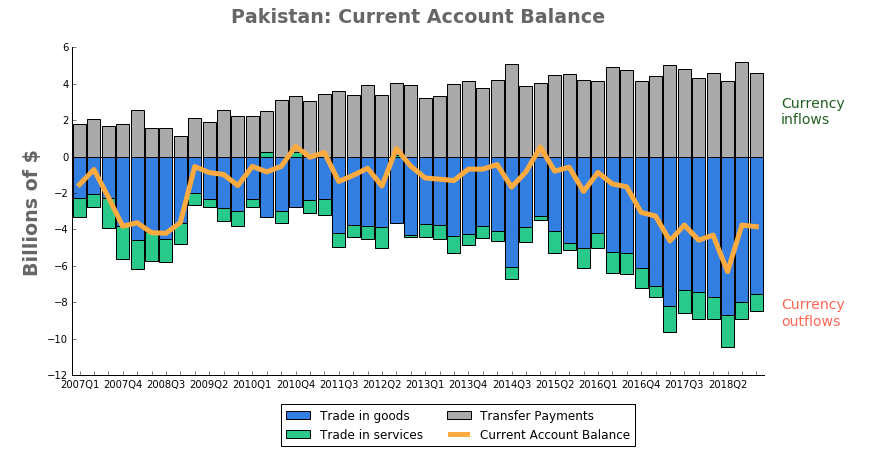 As you can see from the graph, the CAD is a long-term problem for Pakistan and, since 2016, it experienced a significant deterioration. The main component that generates a deficit is trade in goods, which outweighs the positive contribution of remittances.
In the last two quarters of 2018, the CAD showed an improvement compared to the low point reached in Q2-2018, thanks to a reduction in imports and an increase in transfers.

The need to finance the current account deficit has led to a reduction in foreign exchange reserves, which amount to 8.8 billion dollars in half May (3 months of import cover).

You can infer Pakistan’s critical economic situation from its currency, as well. Since the end of December 2017, the exchange rate against the dollar has collapsed 6 times: this makes quite clear that the State Bank of Pakistan is devaluing the currency.
The last collapse occurred in the second half of May, after the conclusion of the agreement with the IMF. From mid-May to date, the currency has lost more than 7% of its value against the dollar. 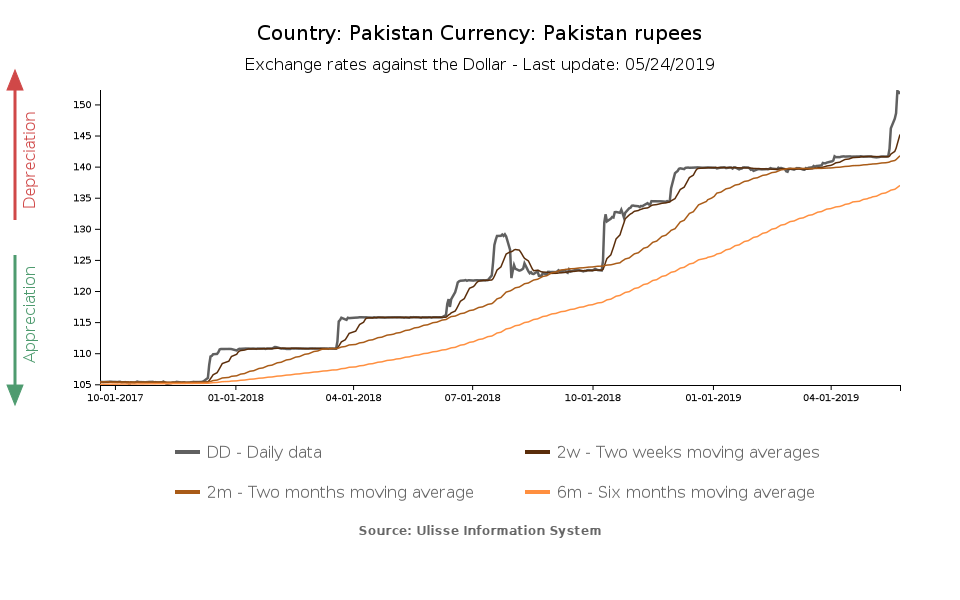 Devaluation is an integral part of a process aimed at reducing macroeconomic imbalances; according to many analysts, the currency is in fact overvalued.
Prior to the agreement with the IMF, Pakistani exchange rate regime was – de facto - a managed float (a hybrid between a fixed and a flexible exchange rate regime, in which the central bank intervenes - more or less outright - to guide the exchange rate). Now, on the contrary, one of the main pillars of the agreement with the IMF is a market-determined exchange rate, which can reflect the effective value of the currency.

Another recent monetary policy move carried out by the State Bank of Pakistan is a 150 bps rate hike, effective from May 21 (12.25%). The goal of the central bank is to address inflationary pressures, which can particularly affect the weakest segments of the population. In line with the depreciation of the Rupee, inflation has indeed accelerated in recent months: a year ago, general CPI was around 5%, while in March 2019 it reached 9.4% in March. Slight slowdown in April, when prices rose by 8.8 percentage points.