A year on from the start of the trade war, what is the US trade situation?

US trade deficit rebalancing is one of the central political issues in the foreign policy agenda of President Trump. Behind his “America First” mantra, lies the aim of reducing existing trade imbalances through tariffs; and in particular the deficit with China. The idea is that imposing tariffs would make imports more expensive, thereby discouraging Americans from buying foreign goods and at the same time improving sectors of US local industry that are weak and internationally uncompetitive.

A trade deficit occurs when a nation imports more than it exports. The gap between US exports and imports of goods has grown without interruption in recent years. By far the largest US bilateral trade imbalance is with China: the deficit reached $414 bn in 2018. 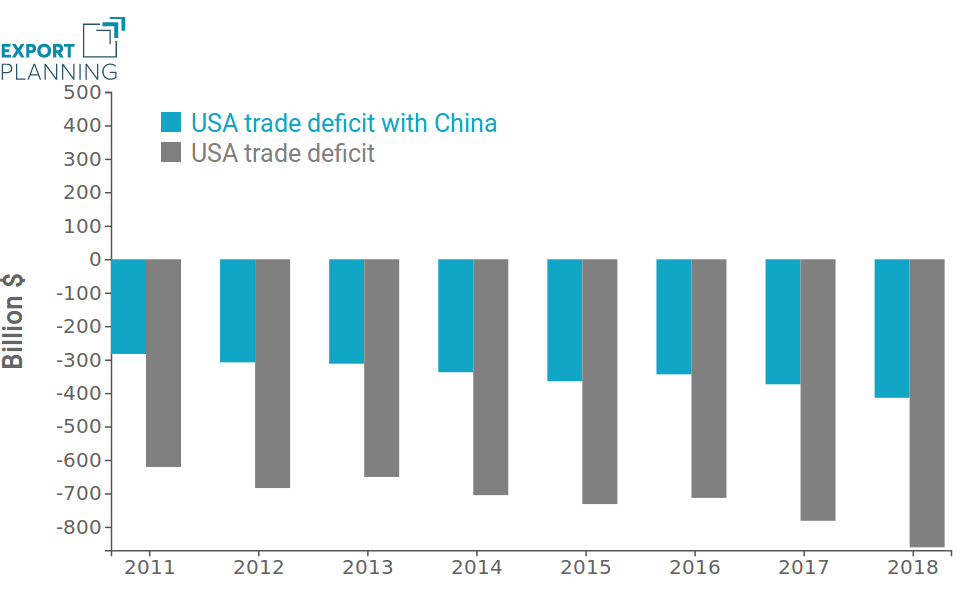 So, what has changed in the US trade deficit position since the start of the Trump administration protectionist actions?

The graph below presents monthly figures for the US trade deficit, in which the red line represents the beginning of protectionist actions. It is clear that the downward trend of the deficit actually continued until mid-2018, after which a period of stability began. From October 2018 through to April 2019, the year-on-year US trade balance did in fact remain stable . 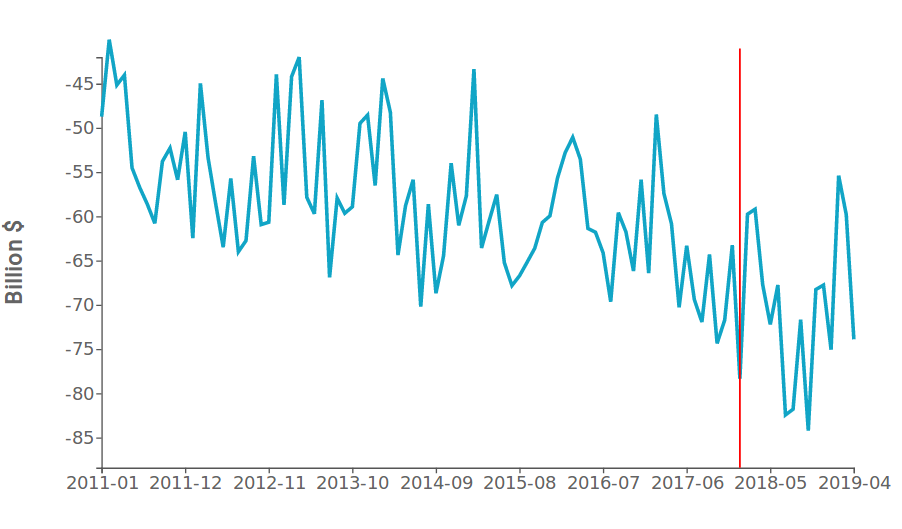 To gain a fuller understanding of the trade data, a timeline of the main tariff actions introduced by President Trump is shown below.

Overall, it would seem that following the third and most important tariff provision against China, the downward trend in trade deficit came to a halt, but only after a significant worsening of the gap between US imports and exports. This outcome suggests that there are no signs of a significant improvement in the American trade gap.
The observed results can be attributed to different kinds of factors that have influenced the trade deficit over the last few months:

The strong growth in domestic American demand, supported by tax-cut policies of the Trump administration, together with a stocking up effect of Chinese goods hit by the tariffs, is one of the most significant effects behind the growth of US imports. In cases where a delay occured between the announcement and implementation of tariffs, there was an increase in imports growth prior to the effective date for the tariffs, suggesting that importers were stocking up ahead of the implementation date.

The trade deficit also depends on the performance of US exports in foreign markets. In recent months, US exports have grown at a less dynamic pace than imports, due to the global economic slowdown, the relative strength of the United States dollar and retaliatory tariffs imposed by China. This effect resulted in a further worsening of the gap between import and export flows.

The third factor is a possible substitution effect of China’s exports by third country exporters.
In the medium term, market shares left by China were occupied by third-party producers, resulting in a reallocation of trade flows. One effect of the trade war is to make suppliers of goods from third countries more competitive than Chinese and domestic US companies. However, if the tariff actions of the American administration target other countries beyond China, as has been threatened by President Trump, this effect would tend to be negated.

In summary, the effectiveness of US tariff actions on improving the US trade deficit is doubtful, at least in the short to medium term. However, what is clear, is that the tariff threat has become a tactical tool to set up a bilateral dialogues, outside WTO rules.