Uncertainty on Forex Markets: All Eyes on Osaka

A quiet week on forex markets, which are in "wait and see" mode. As a matter of fact, at the moment all eyes are on tomorrow's meeting between the Chinese and American presidents, Xi Jinping and Donald Trump, on the sidelines of the G20 summit in Osaka. Hopefully, the meeting could lead to resumption in trade talks between the two superpowers and a potential agreement that could put an end to the trade war.
As we wrote in May, the Chinese Yuan is gauging trade war tensions: in line with this position, in recent days the Yuan has remained stable against the greenback, waiting for a possible breakthrough between the two sides.

Concerns about trade war, together with a growth slowdown in major economies, have long been weighing on economic and financial sentiment. This is confirmed by medium-term currency dynamics: since the beginning of May - when the American administration ended the truce in the trade war with China , an appreciation trend can be seen both for the Swiss franc and Japanese jen- safe-haven currencies par excellence.

Together with franc and yen, another safe-haven asset hoarded in times of uncertainty is gold. In the past month, the gold price1 has increased by almost 10%, confirming the trend of the two currencies. 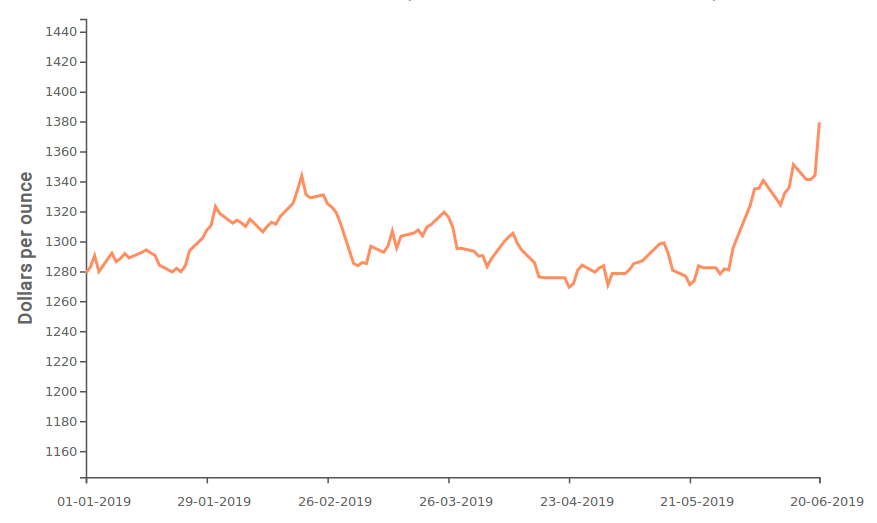 According to analysts, gold price dynamics is also influenced by trade war tensions. A further element that can prop up the price of gold is the genaral readiness of central banks to adopt expansionary monetary policies to combat economic slowdown.

Who has been buying gold in recent months? gold.org data shows that a significant increase in the demand for gold came from central banks. Globally, in Q4-2018 central banks increased their reserves by nearly $110bn worth of gold compared to the previous quarter; smaller increases were seen in Q1-2019 ($25bn).
The largest single increase in central bank gold reserves between Q4-2018 and Q1-2019 took place in the euro area (total includes the ECB), followed by the US, Russia, China, Turkey and India.