Greenback: All Hail the King

In a context of lingering and widespread uncertainty and weakness, the dollar confirms its role as safe-haven currency.

The past week has been characterized by relative calm on forex markets, given the absence of significant developments. Major trends observed in recent months have been confirmed: first and foremost, the strength of the dollar.
The map below shows world currencies’ exchange rates against the dollar on September 27, 2019; the red colour indicates indicates the presence of a depreciation against the greenback, while shades of green indicate an appreciation. As is evident, only a few countries are spared from the weakening against king dollar.

In addition to the strenght of the dollar, some additional trends that we analyzed in recent months have been confirmed in the past week:

In a context of widespread weakness and uncertainty, it is therefore apparent that the safe-haven currency par excellence is once again proving to be a trusted place for international investors. On top of this there are the good yields offered by US bonds, and their low risk compared to emerging markets.

In the last year the dollar confirmed its supremacy, strengthening by almost 7% against the euro. As regards the greenbacks’ most recent movements, in the last few days different news pushed the currency in opposite directions; nonetheless, the resilience of the exchange rate has not been affected.
During a recent interview, President Trump stated that an agreement with China could take place "sooner than you think"; this certainly helped the dollar, renewing markets’ hopes for a trade deal. On the other hand, downward pressures came from an impeachment threat: last Wednesday, Democrats launched an impeachment inquiry over President Trump’s alleged search for personal advantage in US 2020 elections, through contacts with the Ukranian president Zelenskiy.
Both situations are in the making, so investors are in wait-and-see mode. Nevertheless, the dollar seems to hold up well: its effective exchange rate (available in our Exchange Rates tool), which measures the dollar's overall strength against the basket of currencies of its trading partners, is at an all-time high. 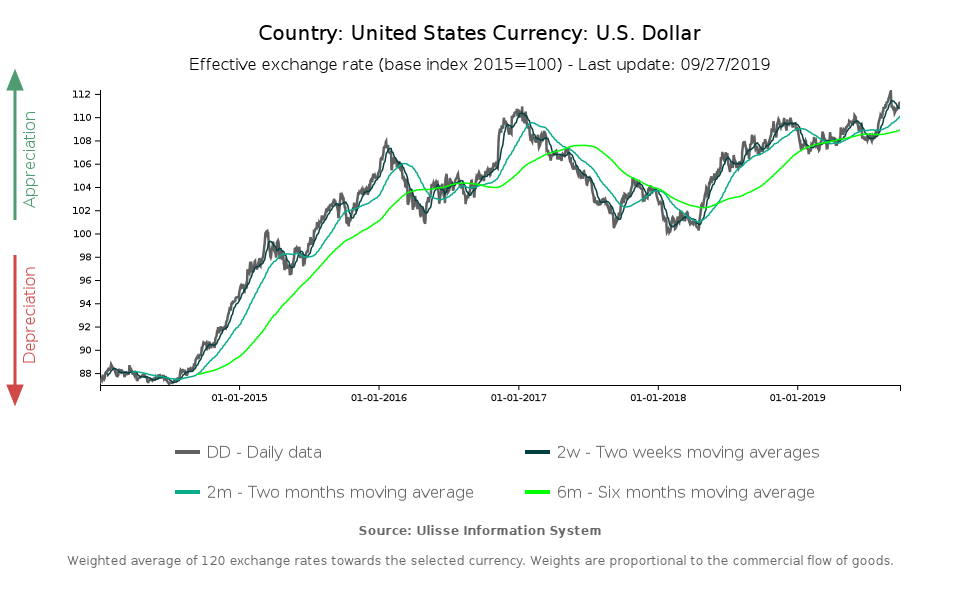