With the update of the Q4-2019 of the World trade quarterly data it is possible to analyze the performance of the entire past year, which was particularly negative in terms of the levels of industrial activity.
The most up-to-date measure of the dynamics of worldwide industrial production is the Purchasing Managers' Index (PMI), which summarizes the level of manufacturing activity based on the purchasing decisions of suppliers. A value lower than 50 indicates a reduction in activity levels, vice versa, a value higher than 50 indicates their growth.
As the chart below shows, since the beginning of 2018 the PMI has followed a downward trend, signalling a slowing phase of the economic cycle, which then became contraction in the second and third quarters of 2019. In the last 3 months of 2019, the PMI recorded values around 50, indicating a phase of substantial stability in world production.

The stability of production is partly a consequence of lower international tensions thanks to the development of dialogues between the United States and China, which began in the second half of October and culminated in December with the announcement of the "phase one" of the agreement (see Focus on: Phase One US-China Trade Deal).

World trade: the weight of uncertainty

The lower levels of global activity have been affected by the dynamics of international trade, which is particularly important as it allows us to assess the global effects of the slowdown, if not recession, experienced by various countries.
When measured in current dollars, world demand shows a marked downtrend from the second quarter of 2018, which entered negative territory since the first quarter of 2019. The graph shows the year-on-year change rates in current dollars, comparing two sources: CPB World Trade Monitor (in gray) and the quarterly World trade DataMart (in blue), available in the Analytics section of ExportPlanning. 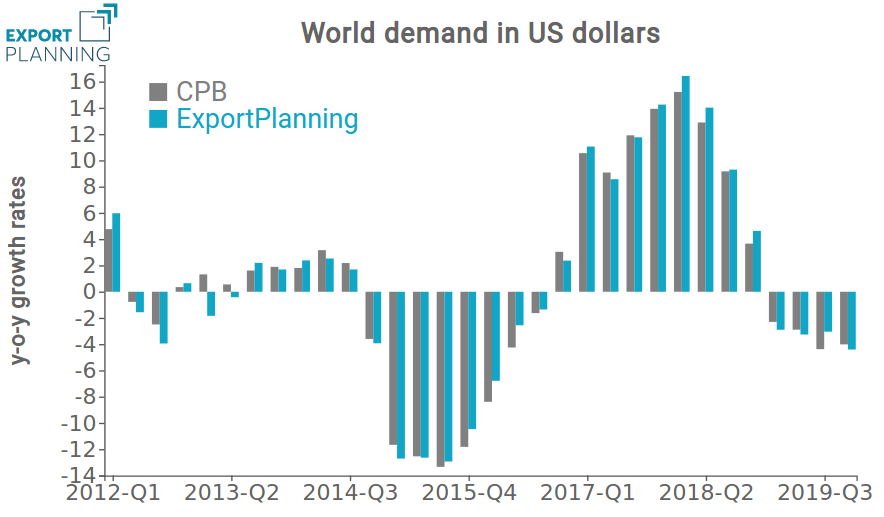 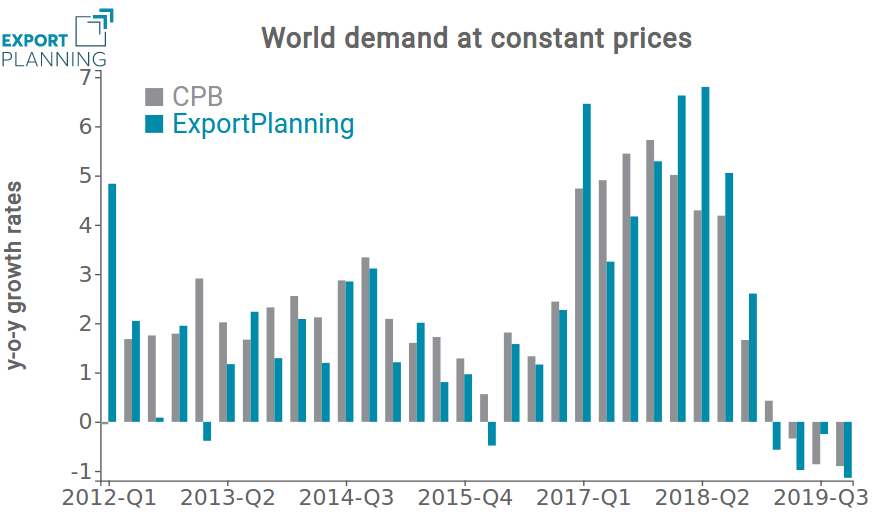 In this case global demand registered a downturn in 2019, too, but at lower rates than those in current dollars. This difference is due to weak prices and the appreciation of the dollar (see exchange rates tool).
The prolonged contraction in global demand measured in both current dollars and constant prices reflects a particularly pronounced period of uncertainty.

Several indicators lead to a contraction in international trade caused by the climate of global uncertainty. The recent "phase one" deal between the US and China had bode well for a relaxation of international tensions and the subsequent improvement in economic operators' expectations, but there are three main factors hindering a recovery in the short term:

The first two factors undermine the unstable balance of the agreement between the United States and China, whose finalization has the reduction of part of the uncertainty as a direct consequence. The third factor, of a different nature from the first two, is leading to a slowdown of the Chinese economy, strongly weakened by the measures put in place by Beijing to deal with the spread of the epidemic.