One of the key points of "phase one" trade deal signed by the United States and China is the commitments made by the Asian partner in terms of increasing imports of goods and services. The objective of the American administration is in fact to impose a purchasing regime for Chinese companies in order to rebalance the trade deficit currently existing between the two countries. However, as mentioned in a previous article Focus on: Phase One US-China Trade Deal, these commitments are particularly onerous. In fact, the agreement provides for an increase of at least $200 bn of American goods and services distributed as follows: an increase compared to 2017 import values of $77.7 bn for manufactured goods, an increase of $32 bn for agri-food products, a growth of $52.4 bn for oil & gas and $37.9 bn for services over the 2020-21 period [1].

US Export of Manufactured goods 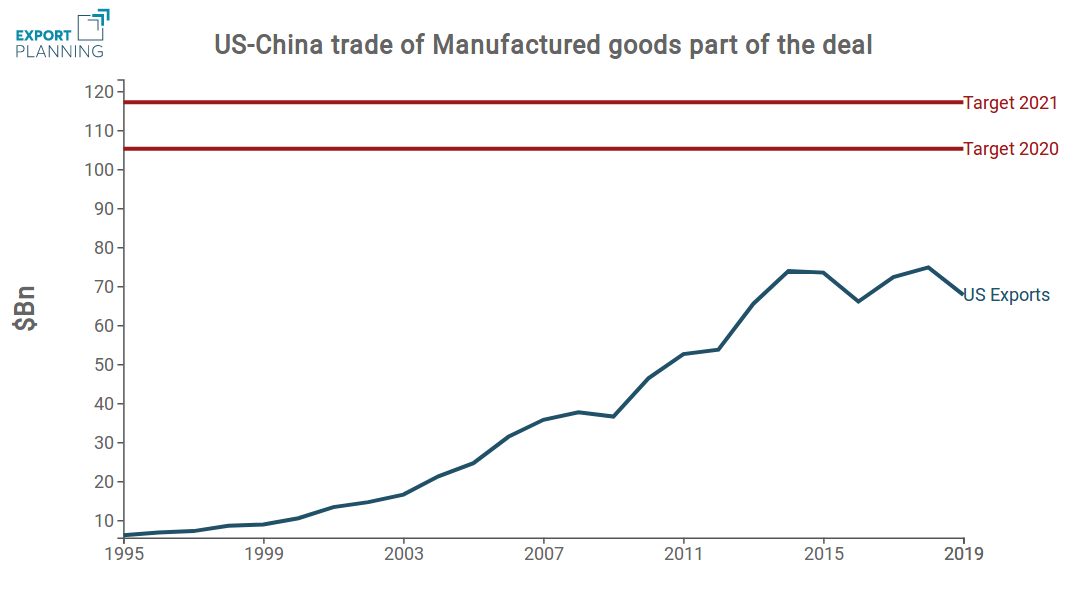 It is clear, that the commitments made by China appear particularly onerous and cast significant doubts on the fulfillment of the contractual obligations signed. A further critical element is linked to the current international context and, in particular, to the extent of the economic repercussions of coronavirus.

The risk for other Chinese commercial partner

One of the factors of major risk for other China's trading partners is the possible breakdown of the existing competitive balance. In order to ensure the proper fulfilment of the obligations under the agreement, it is in fact reasonable to assume that China will have to, at least in part, reallocate its imports in favor of the United States. This in order to ensure a significantly higher demand for made in US products, threatening, however, the market shares held by other coutries.

Which Chinese trading partners could be more at risk?

The following graphs summarize the main categories of manufactured goods covered by the trade agreement, showing for each category the value of US exports to the Chinese market recorded in 2017 and the relative market share held by US, EU and other commercial partner.
It is clear that, in the case of manufacturing, the Trump administration has aimed at expanding Chinese imports of three macro-product categories: Means of transport (airplanes and motor vehicles), Industrial goods (machinery, instruments and equipment) and products of the Health System (medicines and medical devices). The list includes also iron and steel products and a residual category, consisting mainly of household and personal care products.

For the Means of Transport category, the most relevant threats mainly concern European partners.

The U.S. shares the Chinese market with the Airbus consortium partners, first of all France and Germany. This is a further element of tension between the USA and the European partners, as part of the historic Boeing-Airbus dispute.

In the case of vehicles (commercial and private) the expansion of U.S. exports could harm primarily Germany, the first player on the Chinese market for the sector, but also Japan and United Kingdom, holders of significant market shares.

For the category of Industrial Machinery, the Asian partners are the most threatened.

The commercial agreement includes a massive coverage of machines for industrial processes, mechanical components and industrial plant engineering. For the sector, Japan is the first player on the Chinese market (it holds 24% of the market), followed by Germany; the USA is the third player, with a US market share of 11%. The remaining competitors are Asian, particularly South Korea and Taiwan.

Also in the case of electrical equipment the main players on the market are Japan, South Korea and Taiwan.

For health product sector the European partnersare under the greatest threat.

In the case of medical equipment the United States already has a leadership position on the market, competing mainly with Germany and Japan.

For pharmaceutical products, the USA is one of the main market players. Germany is one of the most exposed Chinese trading partners, together with Switzerland.

The list of products also covers US exports of steel, including intermediate products, for which the US presence on the Chinese market is absolutely limited. Compliance seems to be part of the American strategy to strengthen the domestic steel industry, as shown, moreover, by the tariff actions taken in recent years. In this case, the main players on the Chinese market include Japan, South Korea and Indonesia.

The trading partners potentially threatened by the expansion of US exports are several. On the basis of the analysis carried out, the main trade threats seem to be concentrated on the main European partners, first of all Germany, given its trade relations with China, and on the main Asian partners, first of all Japan. This evidence casts further doubts on the maintenance of geopolitical balances, particularly for the transatlantic ones.
It should also be stressed that, in addition to the main Chinese trading partners mentioned here, the expansion of US exports poses a perhaps even greater threat to those smaller trading partners with a lower market power than major players.The latter in fact could risk being completely cut off from the market due to the increase in US exports.

Monetary policy focus: the cases of Brazil, Czech Republic and Turkey [ Read all ]