Forecasting scenarios: in the presence of economic breaks, the subjective aspect tends to prevail over the scientific one

When the economy is subject to structural breakdowns, forecasting scenarios might be read with a different meaning. Under normal conditions, in the term forecast scenario, more emphasis is usually given to the word forecast, interpreting forecasting figures in the same way as the numbers referring to historical facts. But under exceptional conditions, when economic actors change their behavioural patterns, in the term forecast scenario more emphasis should be placed on the word scenario, which presents one of the many possible outcomes of the future economic situation.
The issue has a technical basis. Any economic scenario is characterized by three key elements:

The contribution to the forecast scenario provided by the model is the scientific part of the system, in the sense that it tends to reproduce the same results, for any researcher who estimate and use the model. The most subjective part is represented by exogenous variables and CA. These components are defined autonomously by the people involved in the forecast estimating. Generally the model, i.e. the scientific part, has a relevant weight in defining a forecast scenario. In the current situation, which is characterized by significant disruption in the behaviour of economic operators such as to require a challenging picture of the possible evolution of the exogenous variables and CA set, the subjective component tends to prevail over the scientific element. The high uncertainty that characterizes the correct definition of the transmission mechanisms of the economic-health crisis on the economic variables impose a necessary caution when interpreting the available forecasting scenarios.

In situations of great uncertainty, the analysis of the current economic situation, using actual data to measure economic changes in the near future, assume greater importance.
One example is the world trade forecast. The importance of the correct assessment of external trade is twofold. It represents a benchmark for exporting companies to assess whether or not falls in sales to foreign markets are in line with the market dynamics. If the results show a lower (higher) fall compared to the whole the market, they indicate a higher (lower) resilience of the company's sales in that market.
World trade dynamics also represents a measure of the contagion effect between the crises experienced by different economies. In a context of a high slump in world demand, no open economy can hope to avoid the effects of this crisis through public policies. On the other hand, if the collapse is contained, all open economies can hope to find in world demand a growth factor compared to the severe drops in domestic demand. These two factors make the estimate of the actual dynamics of world trade particularly important.

Over the last two months, as the global level of the current health crisis and the lockdowns implemented to limit the spread of contagion has become clear, many institutions, both public and private, have published forecasts of the change in world trade at constant prices in 2020. These forecasts are, for now, within the range [-30%, -10%], confirming the great uncertainty is weighing on the world economy. It is clear that the assessment of the depth and severity of the economic crisis for any country depends, other things being equal, on the actual dynamics of world trade. The possibility of narrowing the forecasting range through cyclical analysis is crucial.

The economic analysis is not immediate and requires special attention (see the previous article World trade: in April -20% for a description of the ExportPlanning Information System methodology used to estimate world trade in April 2020). It is comforting, however, when different institutes, following autonomous processes, arrive at practically identical results in the measurement of economic phenomena.
The following chart shows the YoY variation rates of world trade in dollars quantified by CPB and the ExportPlanning Information System. 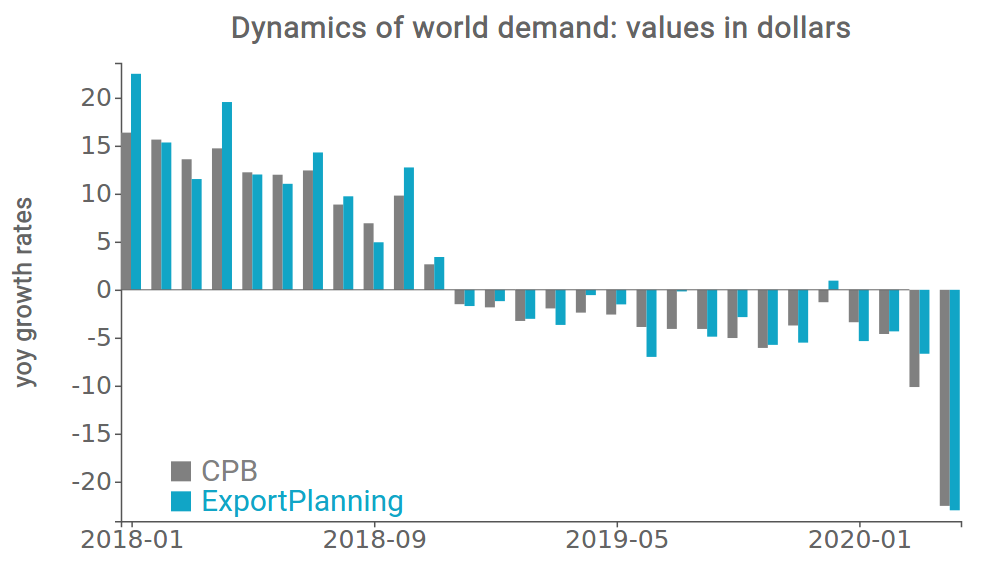 The two time series are almost identical. This allows us to be fairly certain that the measure of the YoY drop in world trade in dollars in April 2020 is -23%.

The chart below shows the monthly dynamics of world trade in quantity produced by the two different sources. 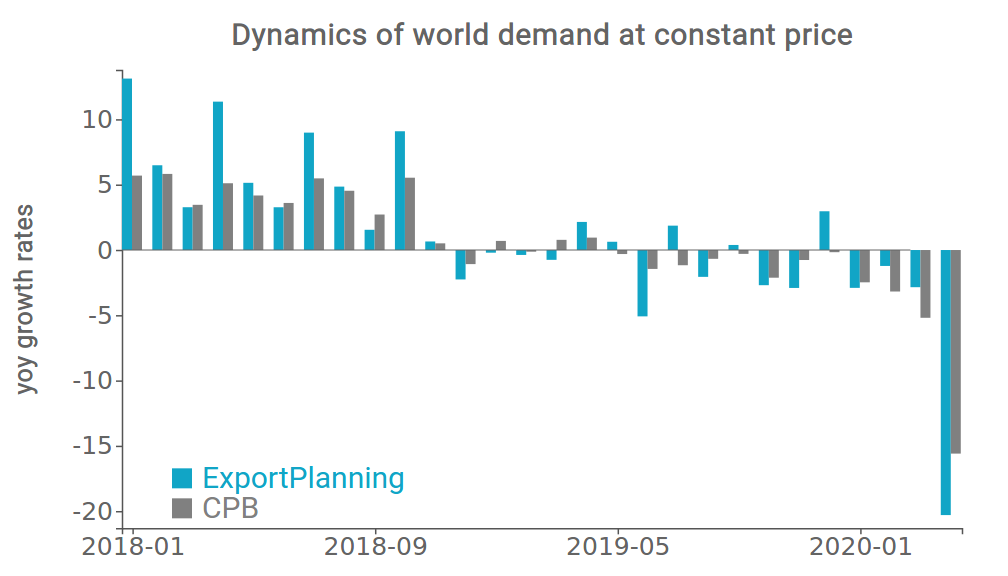 Also in this case the two measures are consistent with each other, although there are some differences in some months. These differences are due to the different deflation methods used: CPB uses a method of deflation of the series of total imports by country; ExportPlanning uses a bottom-up method of deflation of the series at a country and product level.
The particularly important number is the April fall of trade at constant prices, between -15.6 (CPB) and -20.2% (ExportPlanning).

All available information indicates April as the worst month of the current global crisis [1]. May seems to be slightly better. A further improvement seems to have characterised June. However, world trade may lag behind the recovery shown by the world industrial production index. On the basis of these indications, it is possible to narrow the fork of the fall of world trade in quantity in 2020 to around -15%.

[1] See the article Crollo dei livelli industriali mondiali (IT only).