The outbreak of the Covid-19 pandemic on a global scale has led to a massive increase in demand for essential medical goods and equipment, with China playing an increasingly significant role

The outbreak of the Covid-19 pandemic has led to a massive increase in demand for essential medical goods and equipment for the management of the health emergency. Based on the list of anti-Covid products and devices identified by the World Customs Organization (WCO), it is possible to highlight how, during the first three quarters of the new year, world demand for these products has recorded an unprecedented peak. The most sensitive increases were primarily related to the demand for devices directly related to the health management of the epidemic, such as kits for diagnostic tests (molecular tests, reagents, serums), disposable medical devices(oxygen, syringes) and specialized equipment for oxygen therapy; a strong growth has also characterized the worldwide demand for individual face and hand protection devices (masks, visors, goggles, gloves).

However, such a significant explosion in demand for anti-Covid equipment and devices has reinforced fears about the over-dependence of several international economies on imports of essential equipment and devices, highlighting for many countries an inadequacy of domestic production to cope with a sufficiently useful quantity for distribution on the national territory. Globalization has in fact led to a strong productive specialization for the sector, in relation to the different cost advantages of the main exporting countries. In 2019, only three countries held about 40% of total exports of these products, as shown in the graph below. 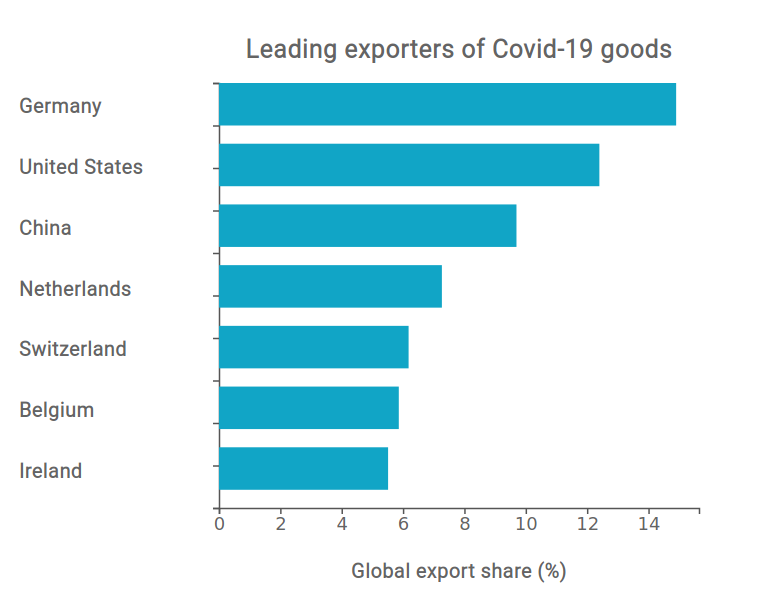 In the ranking of major exporters we can find, first of all, Germany, due to the importance of the country's exports for a plurality of goods, such as disinfectants, diagnostic test kits and various disposable medical devices.
Germany is followed by the United States, with a world trade share of more than 12% and a production specialization similar to Germany, but with a greater importance of medical equipment exports. In third place we can find China, for which the production specialization is clearly linked to personal protective equipment: in 2019 the country held about 35% of global exports of the sector.

However, the spread of the epidemic on an international scale has led several administrations, including the European Union and the United States, to tighten trade barriers with the introduction of export restrictions on emergency management products.
On the one hand, this choice led several economies to boost domestic production of essential goods; on the other hand, it seems to have strongly benefited, at least in the short term, the Chinese competitor (see graphs below).

The strong growth in China's share of world trade during the most acute phase of the emergency is in stark contrast with the trend in the remaining producing countries. In addition, the result only partially affects the sector of greatest Chinese specialization, namely personal protective equipment, but also and above all the other products, for which the importance of the Dragon Country had so far been decidedly more limited.

The increase was visible both in imports from developed producing countries, such as United States and Germany, and from developing countries heavily exposed to the epidemic, such as Brazil, Mexico and Russia.

This evidence is particularly interesting in view of a second wave of infections on the global scene. The role of China in such a strategic sector in the current economic situation seems to have become even more significant than last year, making the country an even more prominent supplier.