In a still highly uncertain picture, it is estimated that the drop in world trade flows due to the health emergency was close to -12% in EUR in the first three quarters of 2020. Although the data available for the third quarter showed a substantial recovery, the outlook for the coming months will depend on the evolution of the "second wave" of the epidemic, which is affecting many European economies, and on the rigidity of the related containment measures.

In spite of a strong generalised decline, it is nevertheless clear that one of the most significant effects of the current crisis is the high degree of differentiation among countries and industries. On the basis of the data available in the latest forecast scenario, available in the ExportPlanning Information System1 , it is possible to see how these asymmetries will strongly characterise the recovery in global demand over the next two years.

At the bottom right of the map, we can find the countries that showed the greatest resilience in the current economic downturn: in this group we can typically find Asian economies, first of all China, as well as Taiwan and Hong Kong. It is estimated that for these economies the recovery in demand will be faster, reaching pre-crisis import values as early as 2021. This evidence is valid, on the European front, only for Poland and Switzerland.
For the remaining economies, the path of recovery in demand will not be consolidated until 2022. In particular, the lower left area includes those countries for which, following the drastic downturn reported in the current year, a slower and gradual recovery is expected, following the normalisation to pre-crisis GDP levels. This is the case, for example, of North America, and some European economies, like the United Kingdom, France and Italy.

An overview by industry

The world trade scenario in sectoral terms is represented by the following map.

In the two-year period 2021-2022 world trade flows of Raw materials (A1, A2) are expected to show a significant rebound, driven by the gradual recovery of GDP growth on an international scale and a consequent increase in raw material prices.
A strong rebound will also characterise the Automotive Industry, especially following the wide contraction experienced by international trade in transport vehicles (F3) and components (D3) during 2020. Greater uncertainty, on the other hand, characterises forecasts for world demand in the Fashion(E2) industry, for which, following the large contraction recorded in 2020, a slower recovery is expected.

Recovery of pre-crisis levels will take place as early as 2021 in the agri-food industry (E0, B1), which had already shown relative resilience compared to other sectors in 2020. The global demand for the Pharmaceuticals and Medical Products(E4) bucks the trend: the sectors will close 2020 with a y-o-y growth of 4.5% in EUR and will show further growth prospects in the next two years.

Considering the strong uncertainty that weighs on world trade prospects in the short term, it is clear that, for the next two years, international competition will be particularly fierce. On the one hand, in fact, the recovery outlook in world demand will appear to be differentiated in terms of market and industry profile; on the other hand, the evolution of the balance of power on international markets is leading China to acquire growing market shares (see graph below). 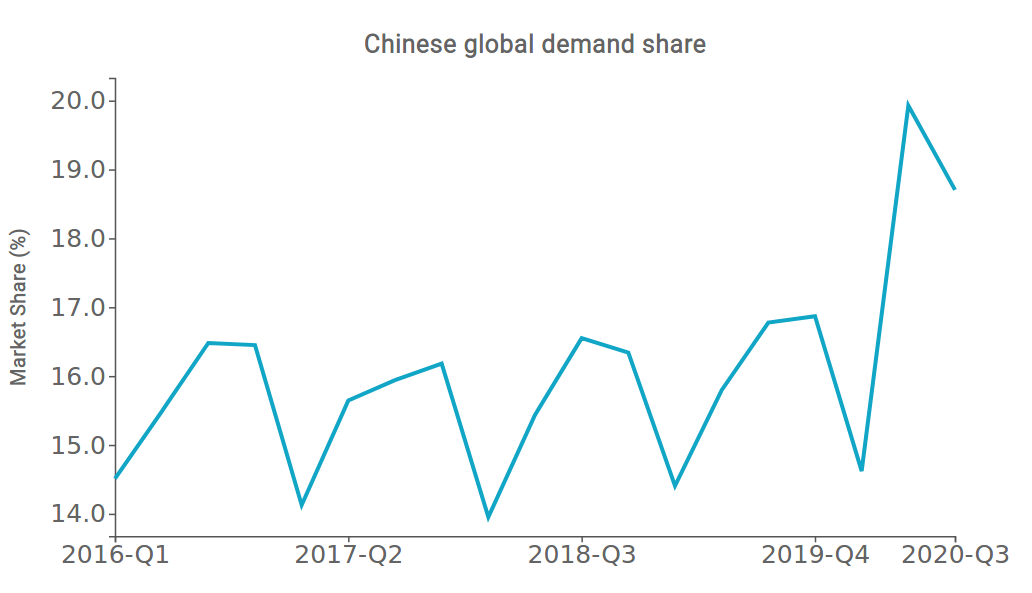 1 The available forecasts are based on the latest World Economic Outlook, published last October by the International Monetary Fund (IMF). ExportPlanning estimates emphasizes a microeconomic approach, making the forecast at the single customs code level based on the elasticity of world demand to GDP, a long-term trend and possible changes in the labour costs of the economies.