Reserve Bank of India: taking the field in defense of the rupee

In this week's currency column, we focus on the case of the Indian rupee, in relation to the recent release by the Reserve Bank of India (RBI) of a document highlighting the central bank's approach towards the exchange rate. Let us therefore take a closer look at the recent exchange rate dynamics and the economic background to this strategy.

Exchange rate dynamics. Looking at the dynamics of the rupee's exchange rate against the dollar over the past year, we can see a trend that is in line with the one observed for most emerging markets' currencies: a sharp weakening between March and April, due to the Covid shock, which then gave way to a recovery from late spring, as can be seen in the graph below. 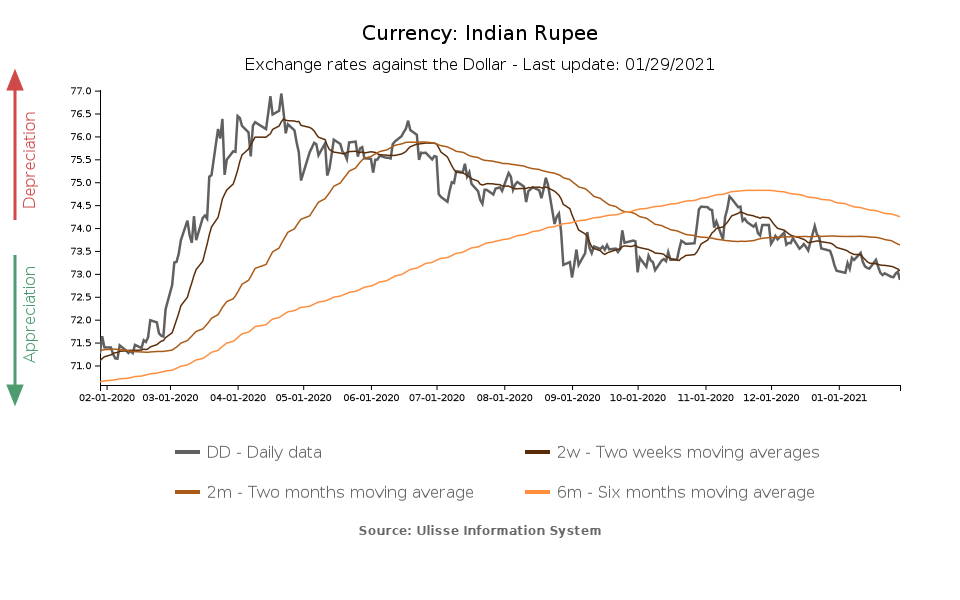 To date, the currency is 2% weaker than it was at the start of 2020, in contrast with other floating EM currencies which, lifted by the dollar bear trend and investors' renewed appetite for risk, are now stronger than they were at the start of 2020. This is the case, for example, for the Taiwan dollar, the Philippine peso, the Czech koruna and the Chilean peso.

The economic picture. The rupee's slower recovery cannot be explained by an underperformance of the Indian economy compared to the rest of the emerging markets' cluster. The country's economic situation, while still uncertain, is in fact showing signs of recovery. Moreover, investors' newfound appetite for risk has not spared India, as shown by the data on portfolio flows, which have picked up significantly in the second half of 2020.

At its last monetary policy meeting in December, the Reserve Bank of India outlined a generally improving scenario for economic activity, despite concerns that particular sectors may have been hit harder than others by the current crisis. There are signs of a strengthening recovery and sentiment is improving among businesses and consumers, helped by progress on the vaccine front. In December, the Manufacturing Purchasing Manager's Index scored 56.4, above the critical threshold of 50 for the fifth month in a row.
In the January 2021 update of the International Monetary Fund's World Economic Outlook, the forecast for India's economic growth in 2020 was revised upwards to -8% (from -10.3%), due to a better-than-expected performance of the economy in the second half of the year. The forecast for 2021 was also revised upwards, from +8.8% to +11.5%.

Monetary policy strategy. In this context, a broadly stable exchange rate dynamics, such as that witnessed for the rupee in recent months, is easier to understand in the context of a specific central bank goal. Data on foreign exchange reserves provide a first clear indication of this.
As can be seen from the chart below, India's trend of accumulating foreign exchange reserves has been almost continuous over the last two decades, and has not slowed down even in recent months, with reserves now exceeding the $500 billion threshold, among the highest levels in the world.

The precautionary accumulation of reserves serves the priority objective of price stability. The Reserve Bank of India's January 2021 Bulletin states that price stability, under the current flexible inflation targeting regime, is necessary to avoid an erosion of export competitiveness, which could result from the nominal appreciation of the rupee. The presence of capital inflows is therefore, in this context, an element that needs to be counterbalanced by central bank action, so as to avoid an excessive appreciation of the currency, but also its excessive responsiveness to capital flows and the dynamics of the dollar.
In the RBI's strategy, the significant reserve buffer is therefore a defensive weapon to cope with any shocks and fuel the rupee's resilience, even at the risk of being put on the US Treasury's watchlist of currency manipulators, as happened last December.