With an overall decrease of 5.8% at constant prices, the year-end was much more brighter than initially expected

November's updated information on customs declarations of companies from the world's leading economies, available in the ExportPlanning World Trade Datamart, allows to take stock of the situation of international trade at the end of this difficult year.
In this context, we can say that the "annus horribilis" ended with a much smaller decline than the one predicted in the most dramatic months of the pandemic, thanks to a fast recovery that characterised world demand after the downturn in April-May.

Tapping into the alphabet of recovery, the recovery of global demand for goods took the shape of a "V". The graph below identifies this dynamics quite clearly, showing the year-over-year changes (compared to the corresponding month of the previous year) in world demand for goods in dollars. In order to ensure and certify the robustness and reliability of the data under analysis, the information processed by the CPB|Economic Policy Analysis institute was compared with ExportPlanning data. Indeed, the alignment of the two series from different sources guarantees to the consistency and reliability of the results. 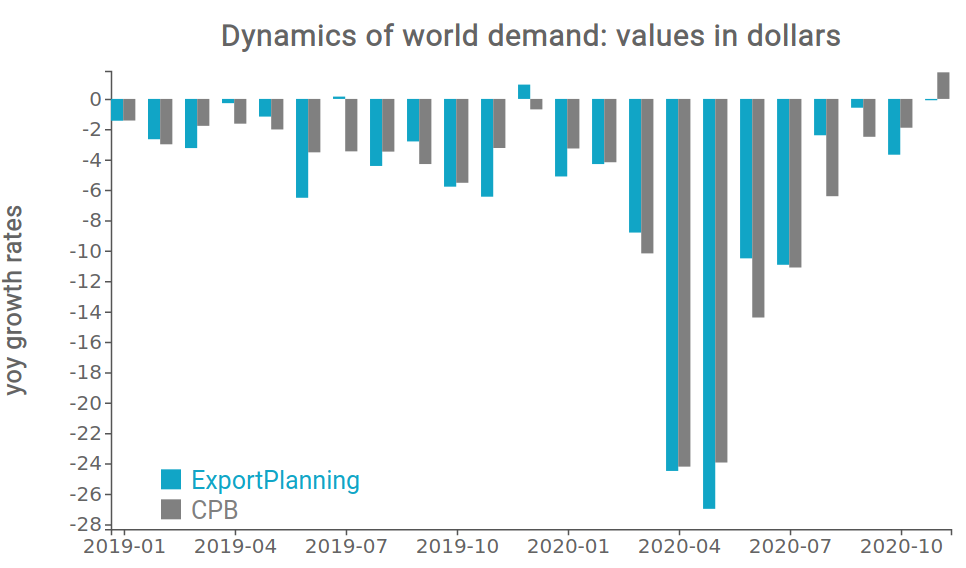 From the chart above, it is clear that the recovery path of world trade in goods seems to have been only slightly affected by the virus resurgence experienced during the autumn months. Of particular note is the result for November, for which there is a full recovery of the gap with November 2019 values.

In terms of quantity, therefore net of nominal dynamics linked to price and exchange rate variations, the picture of the recovery in global demand is consistent with the one presented above, as shown in the chart below. 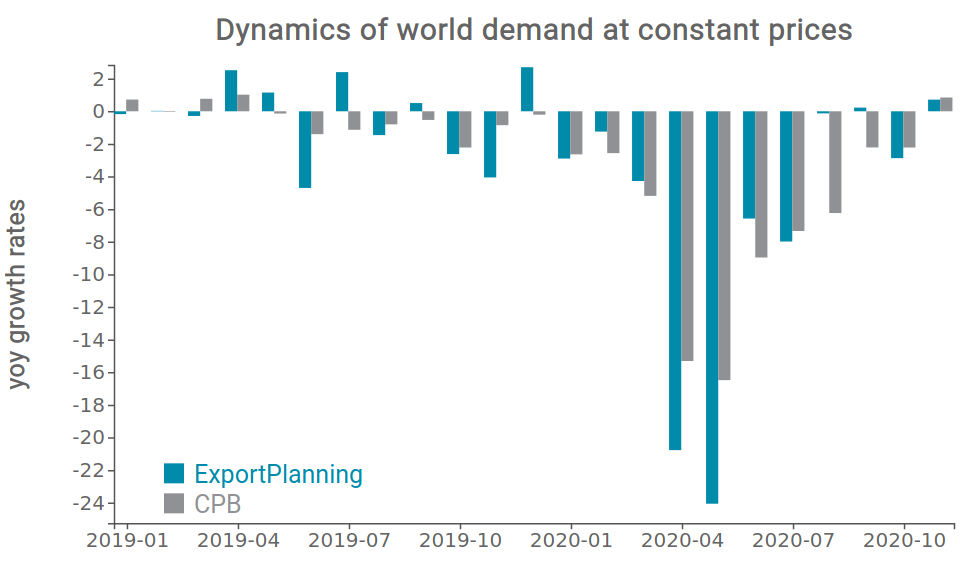 Overall, preliminary figures for 2020 show that the impact of the health crisis caused a drop in global demand in quantity of -6%: this signals a path of rapid recovery in global trade, resulting in a relatively smaller effect of the pandemic crisis than the one generated by the financial crisis.

The result certifies a decidedly more positive end to the year than initially feared, especially with reference to the international trade forecast scenarios drawn up during the early months of the health emergency. The highly uncertain and unpredictable nature of the health emergency had led the World Trade Organisation to estimate a range of contraction in world trade between -13% and -30% in volume. This estimate was revised up and down several times during the year, following the course of the pandemic and the economic outlook for different areas of the world.

Despite a better-than-expected recovery, the uncertainty of the international environment remains high and the recovery picture is particularly mixed. Moreover, it should not be forgotten that the spread of the pandemic has rapidly changed economic scenarios, while at the same time adding to a slowdown in world trade that was already visible during 2019, due to increased protectionist actions by, first and foremost, the United States and China. The coming months will indeed be crucial for the revival of multilateralism and the future of world trade. In this context, the role of strategic analysis is particularly relevant to meet the challenges of this particular economic phase.