After focusing, over the past few weeks, on the cases of some emerging currencies that showed a weak performance during 2020 (see the case of the Indian rupee) or underperformed the cluster average (such as the Russian ruble), let us now analyse a currency that has shown the opposite trend, strengthening considerably from the beginning of 2020 to present: this is the case for the Taiwan dollar, the floating EM currency that has appreciated the most against the US dollar during the period considered (+6.65%). 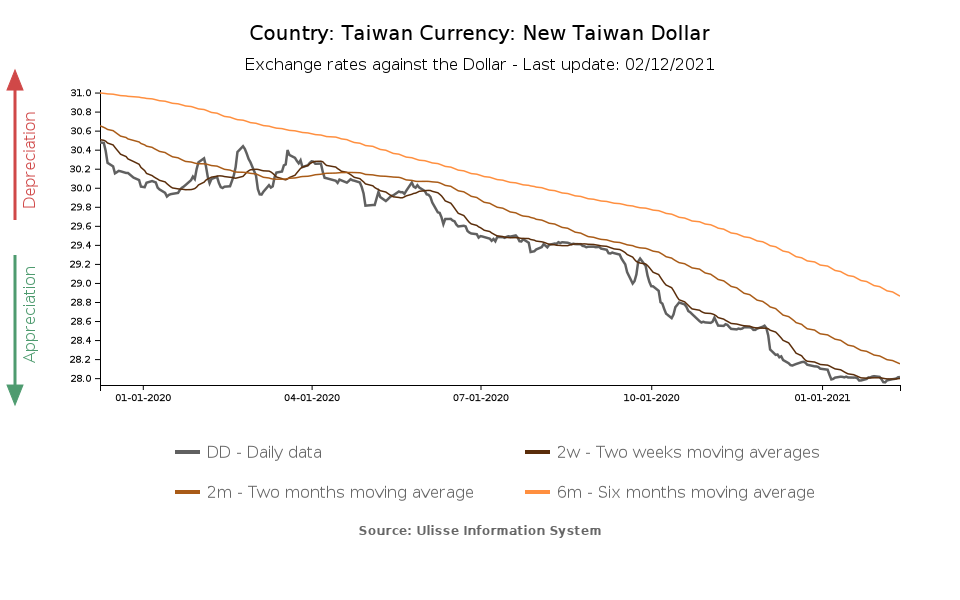 As can be seen from the chart, the strengthening since the spring of 2020 has been considerable and continuous, before stabilizing at an all-time high in early 2021. The currency is currently trading at TWD 28 per USD, which represents a 20-year high. This is causing the central banks' concern about the effects on export competitiveness, so much so that the institution is working to counter this rally through interventions on forex markets. The country's foreign currency reserves, already close to $500 billion at the end of 2019, saw a further increase of $50 billion in 2020, according to the central bank.

In relation to persistent interventions and the presence of a significant trade surplus with the United States, in December Taiwan entered the US Treasury's Monitoring List, which tracks potential "currency manipulators". The governor of Taiwan's central bank responded to this news by stating that President Trump's policy towards China, which has caused a repatriation of Taiwanese capital from China and increased demand for Taiwanese technology over the Chinese one, is among the reasons for the country's rising surplus with the US (source: Reuters).

Reasons for the rally

While the current risk-friendly mood in financial markets and the relative weakness of the dollar are certainly supporting the Taiwan dollar, as is the case with most emerging currencies at this point in time, in the case of Taiwan there are also specific elements that are fuelling the currency's rally - most notably exports. Foreign trade data released by Taiwan's Ministry of Finance show a significant increase in exports over the past year, related to the country's specialisation in technology products (especially integrated circuits, key components of smartphones and computers), which experienced a boom in demand during the pandemic. In 2020 as a whole, exports from Taiwan grew by almost 5% in dollar terms, with positive YoY rates of change in Q1, Q3 and especially Q4 (+11.7%). This supported the country's trade balance (goods), which in fact showed a significant increase in H2-2020, compared to 2019 levels.

For an economy such as Taiwan's, that is heavily dependent on foreign trade with exports amounting to around 70% of GDP, the important role of the current account in supporting the currency can therefore be easily deduced.

Another important source of support for the Taiwan dollar is represented by capital inflows, which have been growing since the beginning of the year, according to the central bank.
The country's financial exuberance can also be seen in the stock market: the Taiwan Weighted Index has largely recovered from the fallout of the Covid shock, and is showing strong growth in the second half of 2020. This reflects the abundant foreign capital flows that are pouring into Taipei, attracted by the growing technology sector, at a time when major central banks are injecting capital into the markets to cope with the impact of Covid-19.

Another element to consider when analysing the currency's strengthening is the possibility of speculation. Indeed, the central bank recently launched an investigation that led to four foreign banks being punished last Sunday for aiding forex speculation by leading Asian grain trading companies.