New Confidence in the Hungarian Forint?

After years of skepticism, the opinion of financial markets on Orban's Hungary is turning less negative

During May, the Hungarian forint experienced a strengthening phase.

After years of strong skepticism that had led to a gradual deterioration of the currency, financial markets seem to express less pessimistic evaluations of Viktor Orban's Hungary. 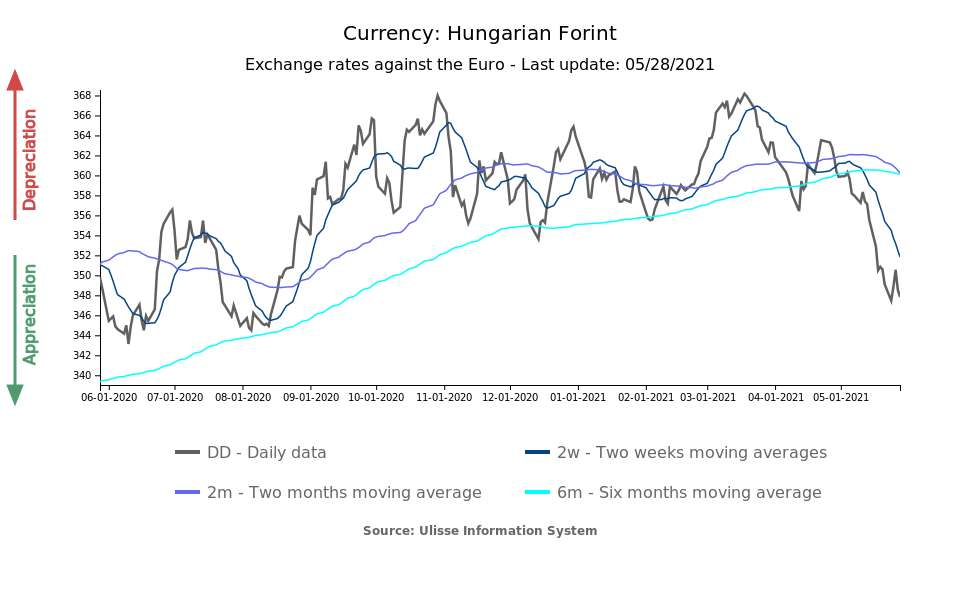 As can be seen from the chart above, as of August 2020 Hungarian currency depreciated in line with concerns about the second wave of Covid-19 and the failed management of the epidemic, fluctuating around 360 flint per EUR throughout the winter period. However, in recent weeks, a clear recovery of the local currency is emerging, which closes the financial week with values close to the beginning of August (347.85 flint per EUR) and an appreciation of 0.4%.

Also the other financial markets are reporting meaningful signs of confidence.

In the last few weeks the interest rate on 10-year bonds has been reduced due to large purchases of securities by international investors. The stock market is also increase, with a growth of 8% in May while the stock markets of most countries was substantially stable.

The factors to consider in the analysis of the Hungarian currency bull trend and the change of direction of the financial markets are many, and closely related to the country's politics.

Vaccine plan implementation. Hungary is one of the countries using the largest number of vaccines, namely 8 in total, four of which are also approved by the European Medicines Agency (EMA), the others coming from China, Russia and India. The choice not aligned with EU indications has allowed Hungary a faster vaccination plan. Data from the Our World In Data from Oxford University, reports Hungary has a percentage of people vaccinated with the first dose above 50%, significantly higher than the EU average.

Approval of Hungarian Recovery Plan. On Wednesday, the Hungarian parliament unanimously approved the retification to the law setting out the EU's 2021-2027 budget framework and the post-pandemic recovery aid package. According to the Recovery and Resilience plan, which was sent to the European Commission on May 12, Hungary is expected to get about 17 billion euros from the EU, of which 7.2 billion are non-refundable. However, according to some local newspapers reporting comments by Prime Minister Orban, the intention of the Hungarian government is to use mostly non-repayable transfers.

If on the one hand the quick approval of the Hungarian Recovery Plan can be seen as a positive signal for relations with the European community, on the other hand the decision to proceed independently with the implementation of vaccines suggests the desire of Prime Minister to emancipate himself from other countries of the area, and to consolidate relations with other strategic allies, such as Russia and China.

Overall, the Hungarian economy is in good health. In the first quarter of 2021, the country's trade balance returned to positive territory, with a surplus value close to 2 billion euros. In addition, according to the macroeconomic scenario of April of the IMF (International monetary fund), the trend growth rate of Hungarian GDP is expected to grow by 4.3% this year and then accelerate to 6% in 2022. 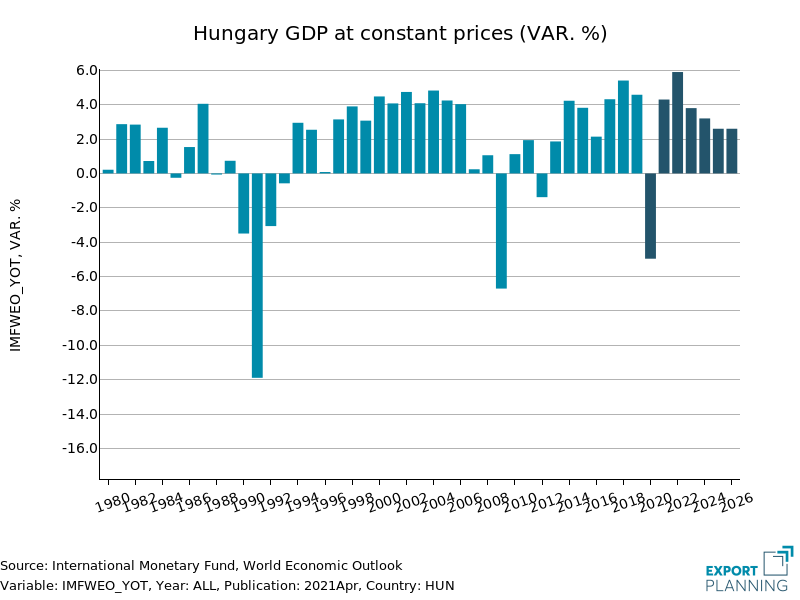 Despite these achievements, the risk of high and above-target inflation (3%) is starting to worry the country's central bank (Magyar Nemzeti Bank, MNB). In April 2021 in fact, annual inflation reached 5.1 percentage points, mainly reflecting the increase in excise duties on tobacco and fuel prices. In this context, at the last monetary policy meeting, held on 25th May, the MNB declared its readiness to act: “The Monetary Council reiterates that they are ready to tighten monetary conditions in a proactive manner to the extent necessary in order to ensure price stability and to mitigate inflation risks”.