Green and High Tech: the competitive Forces of the Future

Patents and international trade data: a look at the competitive positioning of the US, Europe and China

All the world's major economies are currently facing two major industrial transformations that will mark the coming decades and will drive the competitive positioning in the near future: the energy transition and the increasing importance of the high tech industry.
Especially following the US-China tensions, the profound relationship linking technological and ecological progress to international geo-economic balances has become increasingly evident. The "twin transitions", as defined by European Commission, towards a green and high-tech future, are becoming increasingly important on international political agendas, given the important geopolitical implications involved. As argued by the Austrian economist Joseph Schumpeter, in modern industrial economies, there is a very strong relationship between innovation, the technical-scientific capacity and economic projection.

The patent databases are undoubtedly a valuable tool for analysing the state of innovation, by measuring the diffusion of new technologies and assessing the areas 'at the leading edge' in certain fields. Patent data, together with other science and technology indicators, such as R&D expenditure, can be considered a unique and detailed source of information on inventive activity around the world. However, such data are complex and all indicators and data processing must be interpreted carefully. 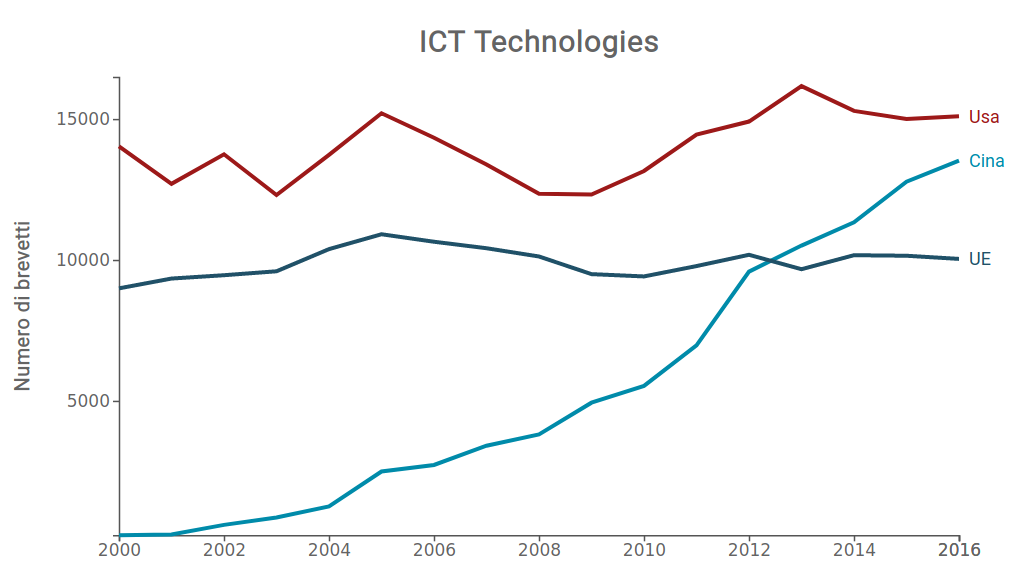 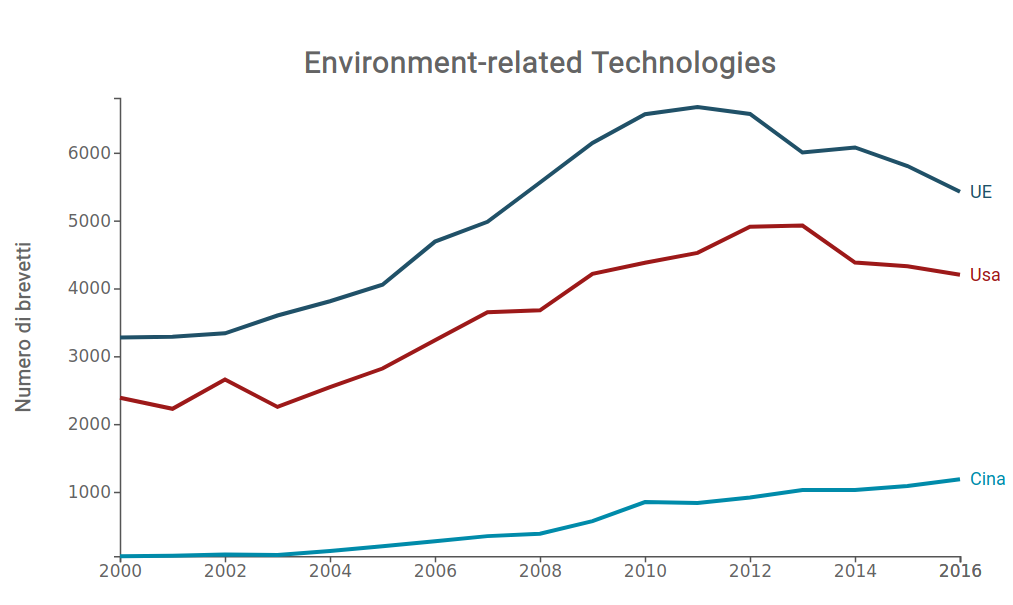 Although the latest data update is for 2016, there is some particularly significant evidence from the graphs:

However, while patent data can be difficult to interpret due to the different registration procedures in the several international offices, a particularly significant indicator in this context is the normalized trade balance. The normalised balance is the ratio between the difference between exports and imports and their sum. The value of the normalised balance thus varies between -100, if the country is only an importer, and 100, if the country is only an exporter, and is a good indicator of competitiveness in the sector for the country of analysis. 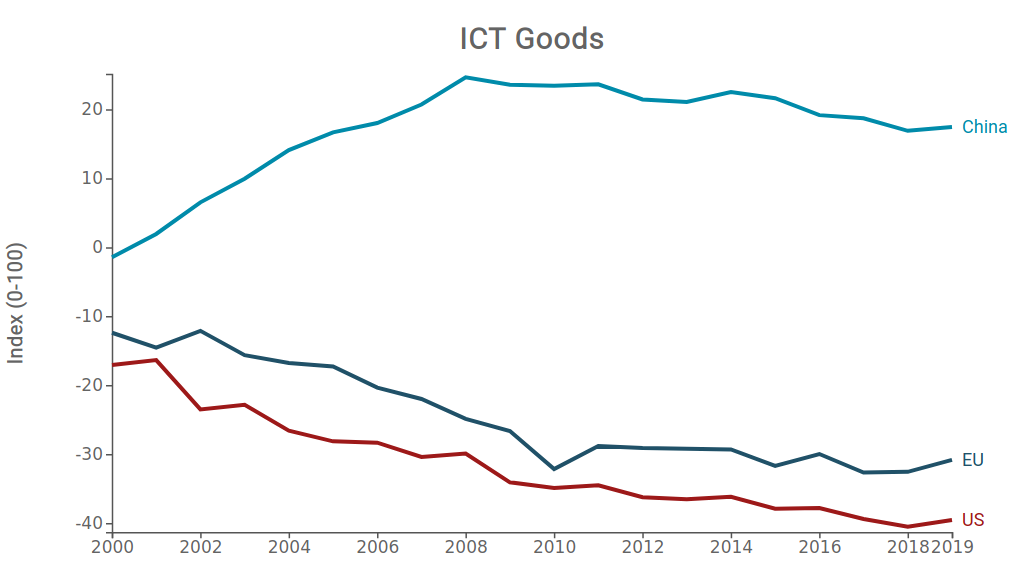 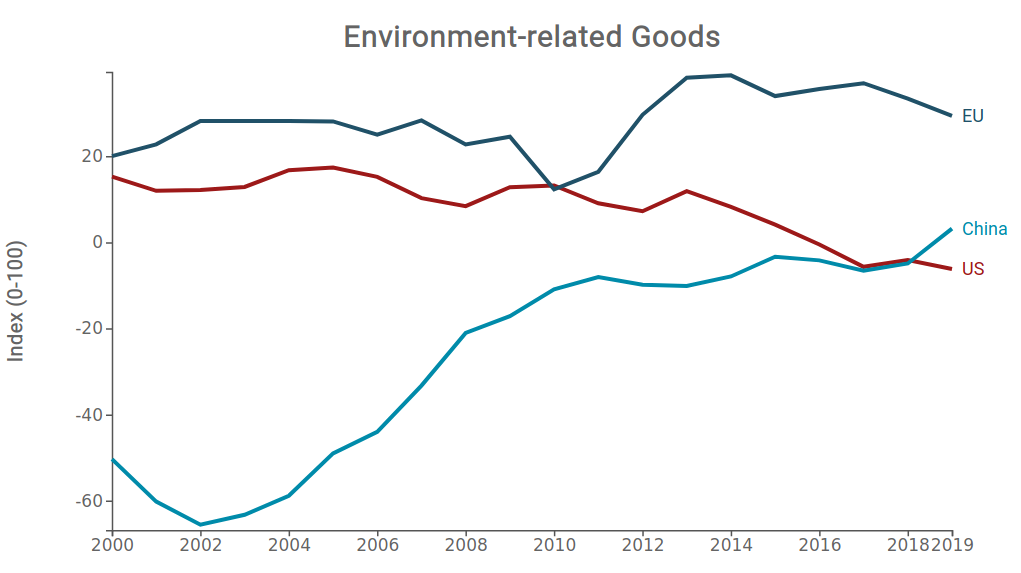 First of all, the world trade data are consistent with what emerged from the analysis of the patent database, sign of a robustness of the phenomena reported. In the case of ICT goods, in fact, China appears more specialised in the international trade of the category; while in the case of Green products, the European Union dominates the three areas. However, it is particularly important to note that, although China is not a particularly "innovative" country, it has progressively improved its competitive position in the Green sector over the last few years, especially due to the growth of photovoltaics. The United States, on the other hand, although it should certainly be considered a very innovative country, is experiencing a sharp deterioration in its international trade performance in both technological fields. Especially for the ICT area, the result is also partly attributable to the significant delocalisation implemented by active American companies: while typically the phases with the highest added value (development and design) are located within national borders, production has progressively followed a low labour cost.

General stability of interest rates for developed countries, while the FED opens the door to tapering; Norway bucks the trend [ Read all ]

Machinery: Global Trade back above 2019 Level in First Half of 2021