Afghani on the road to Venezuela's Sovereign Bolivar

This week the world has been shocked by the crisis in Afghanistan: not only by what is happening, but also by what may happen in the near future. If the military conquest of the country was easy, it will not be so easy for the Taliban to manage the country and create the minimum conditions for its development. In spite of the reassuring declarations, without a prospect of development that would create a minimum consensus among the population, the only possible way for the Taliban to maintain power is to recreate the state of terror that characterised their theocratic regime of the last century. Among the many aspects that the Taliban will have to manage, one on which they seem particularly unprepared is monetary policy. On this front, as soon as the country's banks reopen, they will be judged by the markets through the exchange rate of the Afghani, the country's national currency.
The following graph shows the exchange rate of the Afghani against the dollar over the past 6 months. 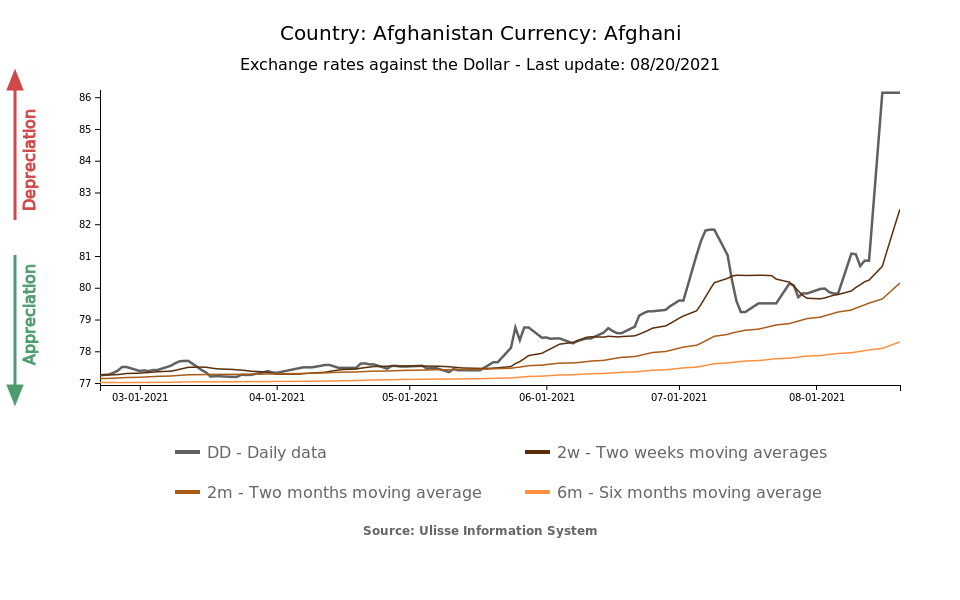 GO TO THE EXCHANGE RATE TOOL


As is evident, during the course of this year, the exchange rate was essentially stable at 77-78 Afghanis per dollar until the end of May, when the Taliban's military operations began. In the following days, the exchange rate depreciated to a high of 82 in mid-July, but then recovered thanks to central bank interventions. On Monday August 16, the day after President Ghani fled Afghanistan, the currency depreciated to 86.2. The constancy of the exchange rate in the following days reflects the closure of banks, which began on Tuesday with the entry of the Taliban into Kabul.
These days, currency exchangers in Kabul are selling one dollar for 90 Afghanis. But what will happen in the next few days, when the economic limits of a possible Taliban government will become apparent?

If the sovereignty of a state also takes the form of the right to print money, one of the aspects that characterise a modern state is the ability to guarantee the value of its money, usually by delegating this objective to a central bank. Among the objectives that were pursued by the international coalition, which defeated the Taliban in November 2001, we can find the modernization of the country through the establishment of a central bank (Da Afghanistan Bank, DAB) capable of stabilising the value of the Afghani.
The building of the credibility of the DAB began in 2003 with the issuance of the new banknotes: the value on the currency market was fixed at 43 AFN per USD. 20 years later, before the Taliban advance began in May 2021, the Afghani was trading at 78 AFN per USD: the goal of stability of the Afghan currency therefore seemed to have been essentially achieved. However, this is just partially true: dollars and, in border areas, Pakistani rupees and Iranian rials, are also used in Afghan economic transactions alongside the national currency. In 2006, 83% of bank deposits were denominated in dollars. In the following years, this share decreased, but very slightly.
The latest available estimate, from 2015, gave bank deposits in dollars a share of 66%. The dollar is used as a medium of exchange for real estate purchases, professional services and the purchase of imported goods such as computers and cars.

By an ad hoc law of 2003, Da Afghanistan Bank was given responsibility for the country's monetary policy, with the aim of keeping inflation low and creating favourable conditions for sustainable growth. Within this framework, the law also entrusted the bank with the formulation and execution of exchange rate policy. The regime adopted by the bank was a managed floating exchange rate. In this regime, the exchange rate is determined by supply and demand factors in the market. The bank only intervenes to prevent serious fluctuations that could exert negative impacts on businesses and consumers.
Over the years, the bank has intervened to limit exchange rate depreciations, with the aim of containing inflation. This was only possible thanks to transfers received from abroad.

Afghanistan's trade balance is strongly negative. Not having an industrial system, Afghanistan has to import most of the industrial goods it requires. On the export front, the capacity to offer goods and services on foreign markets is limited to a few vegetables, fruits (pomegranates, grapes, almonds, apricots) and minerals, which are mainly exported to Pakistan and India.
In theory, Afghanistan's export potential is high. The country has a long tradition of fruit production and processing, of which the kangina is the most representative. However, many orchards have been devastated by constant wars. Its thousand-year-old culture and natural beauty make it a possible tourist destination, but the absolute lack of security prevents this development path from being considered.
The country is rich in mineral resources (iron and copper ore, as well as rare earths), estimated to be worth $3 trillion. Their extraction, however, requires high investments that no company is willing to make without adequate guarantees.
Until last week, the main source of foreign currency was represented by foreign transfers. The World Bank estimates that international aid accounted for 43% of the country's GDP in 2020.

On August 23, the Central Bank should have received $340 million from the International Monetary Fund, which will probably be suspended. In the coming months, payments to the Afghan army (almost $300 million per month) and NATO contributions to the government will also cease. In a short time, the huge flow of dollars that had, until last week, supported the economy and provided the bank with foreign currency - needed to support the exchange rate - will therefore be lost. In one of his messages on Twitter, Ajmal Ahmady, the governor of the Central Bank, fleeing Kabul, wrote that the DAB was relying on the physical receipt of cash every few weeks.

Although down sharply in the early part of the year, the DAB would have high international reserves. 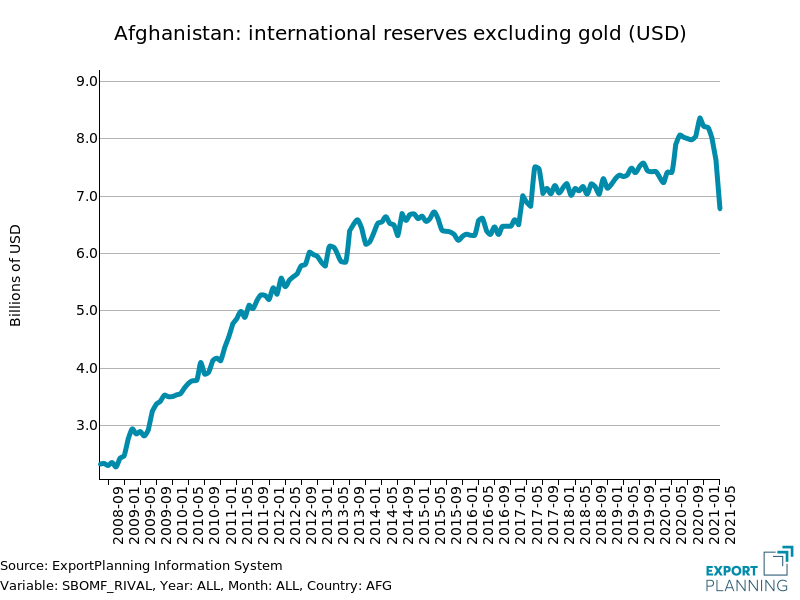 These, however, are not immediately available because they are made up primarily of deposits at the Federal Reserve. The Biden administration has already taken action to freeze these funds, using an executive order passed after the attacks of September 11, 2001, regarding the financial holdings of the Taliban in the United States.

The conclusion reached by this brief analysis is a high probability of a future of inflation and depreciation of the Afghani, repeating the dramatic story that is characterizing Venezuela. The hardest hit will be the poor, because the price of food will rise.