Our weekly currency focus looks at Norway today.
As can be seen from the chart below, during 2020 the Norwegian krone faced the financial consequences dictated by the outbreak of the pandemic, reacting with a drastic depreciation; the surge in the krone's exchange rate against the euro was followed by a gradual recovery that brought it, at the end of April 2021, close to pre-pandemic values. Although the summer led to a slight weakening of the currency, in the last month the exchange rate returned to the levels of early April. The exchange rate closes today at 10.12 kroner per euro. 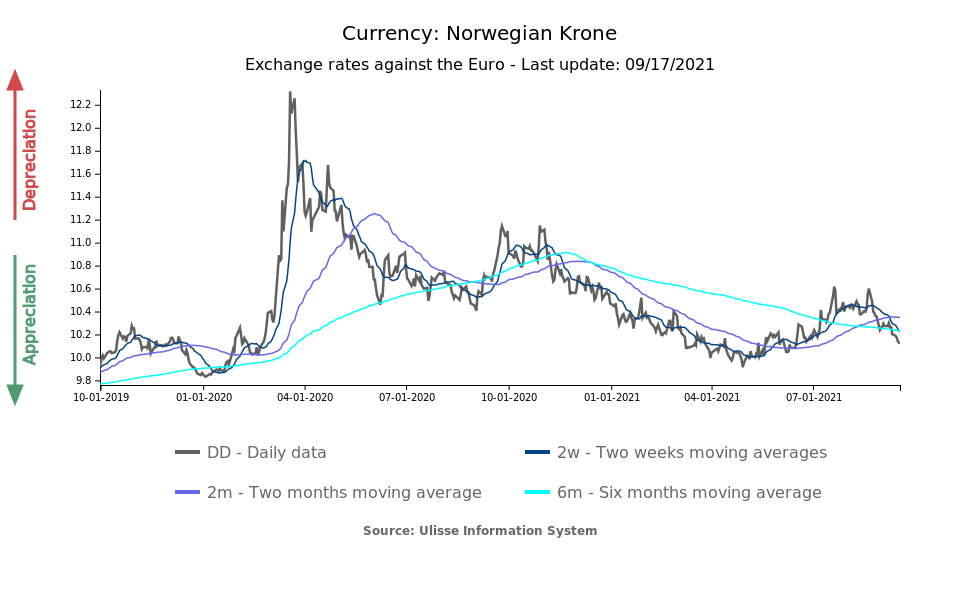 Comparing the dynamics of the effective exchange rate1 of the krone with that of the price of oil, the rally experienced by the latter emerges as a factor that is certainly driving the recent appreciation of the Norwegian currency.
Given the importance of oil and natural gas exports on the Norwegian economy, the country's economic and currency dynamics are in fact historically correlated with price trends; this is confirmed by the dynamics of the last month, as can be seen in the graph below.

Norway was the world's fourth-largest exporter of crude oil in 2020, with foreign sales value of about $24 billion, preceded only by Russia, Canada and the United States.

Although Norway shows a strong trend towards the green transition of the automotive sector, enjoying a wide system of incentives to encourage the purchase of electric cars and qualifying in 2018 as the major importing country of the sector, exports of fossil fuels are the basis of the great wealth of the country. Thanks to oil extraction, Norway managed to create the richest state-controlled investment fund in the world. However, the recent election round could bring big news in this regard.
On September 13, Norway went to the polls for presidential elections, decreeing the handover of the cabinet from the center-right coalition, in government since 2013, to the center-left led by Jonas Gahr Støre of the Labor Party. During these months of campaigning, the desirability of stopping oil and gas extraction due to the climate crisis has dominated the political debate, finding more and more supporters in the country. Støre's party promised a gradual transition from fossil fuels to greener energy and opposed the end of new field exploration, which was instead supported by the more intransigent parts of the winning coalition.

Another important factor to take into account when analyzing currency dynamics are expectations of monetary policy normalization.
According to analysts, next Thursday, September 23, the Norwegian central bank (Norges Bank) is set to emerge as the first central bank among Western countries to raise benchmark interest rates in the post-pandemic period2; a move from 0% to 0.25% is expected. Further hikes are expected in December and March next year, buoyed by forecasts of the country's economic recovery.

If the political debate on the green theme does not yet seem to have insinuated itself into the dynamics of the currency, it is nevertheless possible that the growth of consensus towards a green transition - even before its actual implementation - may weaken the proximity in the dynamics of the krona and oil price. Focusing on the short term, the normalization of monetary policy will most likely be reflected on the exchange rate of the national currency, pushing it towards a strengthening according to analysts.

1. The effective exchange rate expresses the value of a currency not with respect to a single reference currency, but with respect to a basket of currencies, relating to the main trading partner countries of the country considered.
2. The first benchmark interest rate hike in the post-pandemic period by a developed Asian country was led by South Korea.