Car registrations have been diminishing for the fifth consecutive month in the EU market: in November, they decreased by 20.5% compared to 2020

The crisis in the European car market shows no signs of improvement.
According to monthly data from ACEA (the association of European car manufacturers), in November European registrations of new cars stood at 713,346 units, for an overall decrease of -20.5% compared to the corresponding period last year. This is a further decline compared to -30% in October and the previous -23.3% in September, remaining in negative territory for the fifth consecutive month. The final balance of January-November ends substantially in balance with the data of the first eleven months of 2020, registering a -0.04% .
For a complete picture of the performance of the sector over the last two years, the following graph shows the rates of change in registrations for the months of 2021 compared to 2020 and 2019. 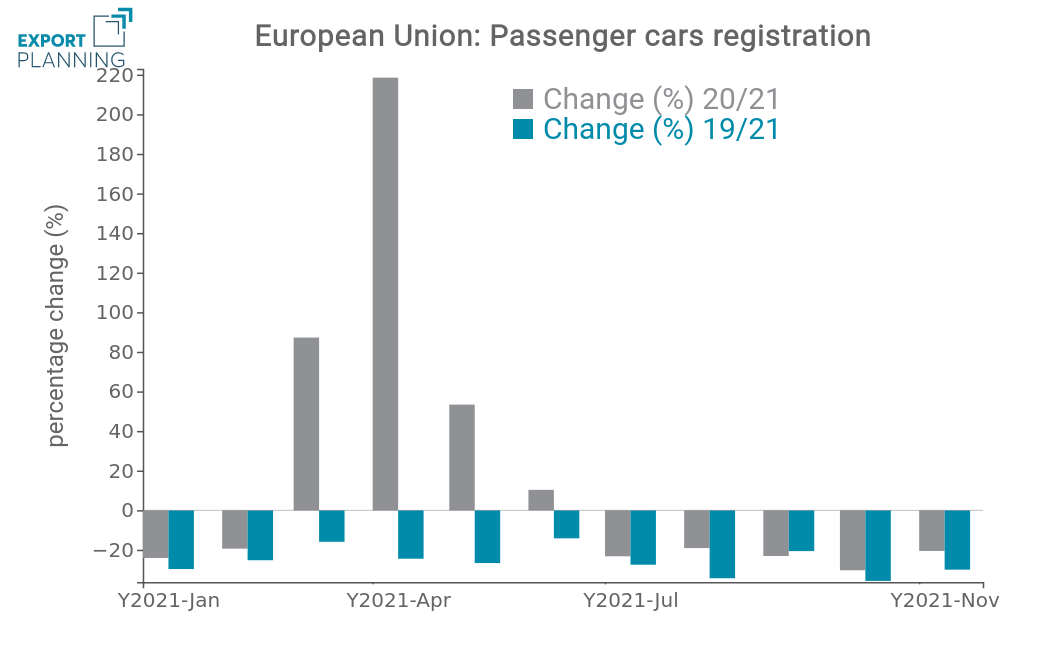 
The most interesting element is that none of this year's month show a higher level of registrations than in the pre-crisis year. In this context, none of the main European markets presented reassuring data in November; double-digit declines are in fact present in almost all countries, including Italy (-24.6%), also affected by the exhaustion of state incentives for zero or low-emission vehicles, and < b> Germany (-31.7%), preceded only by Lithuania (-59%) in the negative record.
The minus sign also prevails among Northern European countries: Sweden suffered the most (-20.7%), followed by Denmark (-17.7%), Netherlands (-17.5%), Belgium (-17%) and Finland (-9%). While Slovenia , Ireland , and Bulgaria represent the only EU markets where registrations are growing, the figure for France testifies to a slower contraction than that suffered by the main competitors. 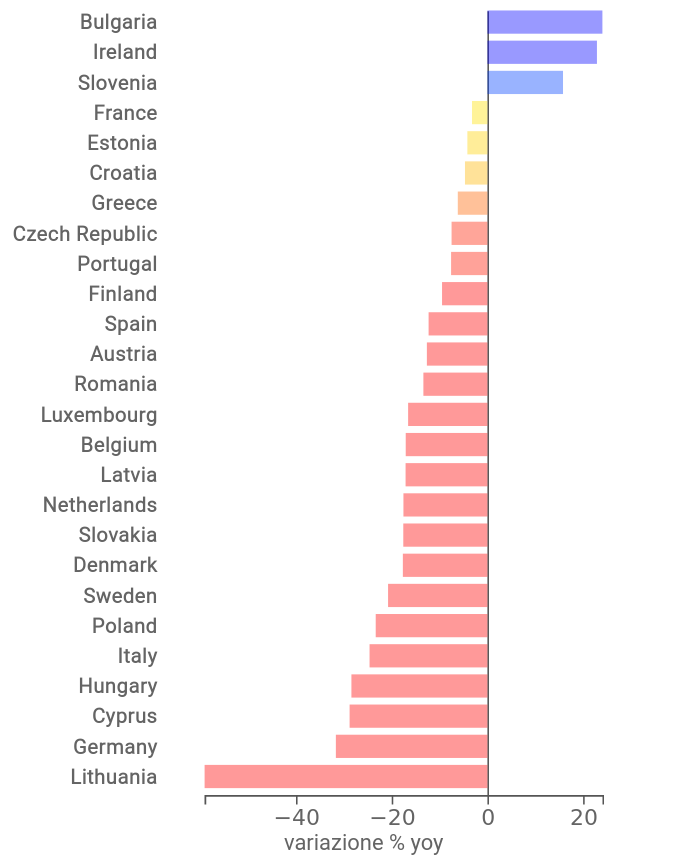 
The evidence suggested by the analysis of internal registrations is accompanied by what emerges from the analysis of European vehicle import flows. Data from European Union foreign trade , updated in October, with a preview of the month of November, show a significant decline compared to last year. 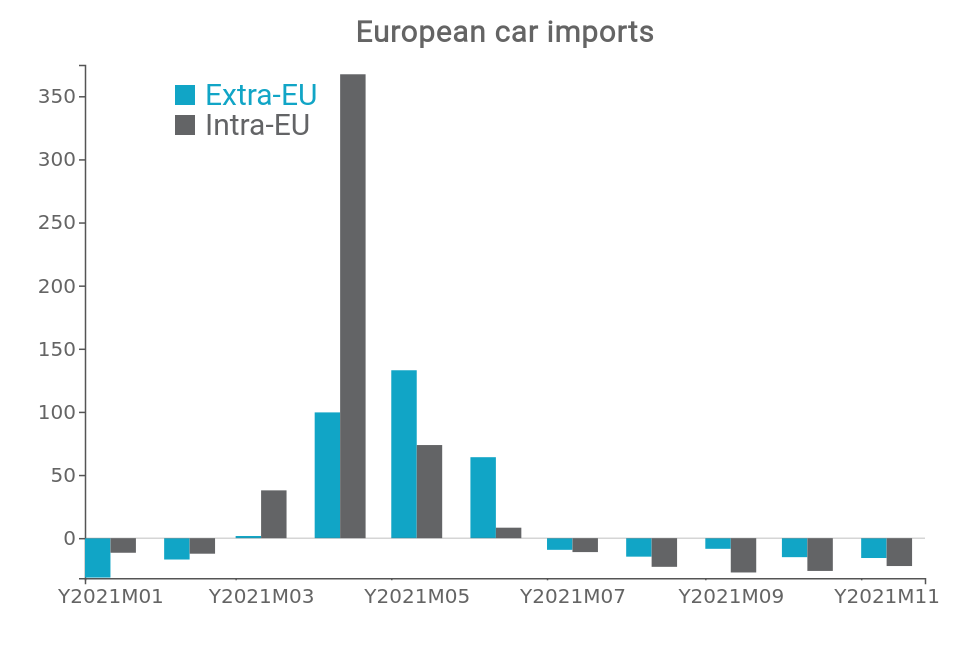 
However, purchases from non-EU countries show a relatively more resilient performance than those from member countries. In particular, since the second half of 2021, imports of vehicles produced in Asian countries have closed the gap with the levels of 2019. The graph below, which illustrates the dynamics of European imports of vehicles, bringing the average of the import of 2019, we observe that Asia is the only geographical area that remains above the value 100. The blockade of NAFTA countries is recovering, while intra-European vehicle trade is still struggling.

European imports of vehicles, by areas of origin 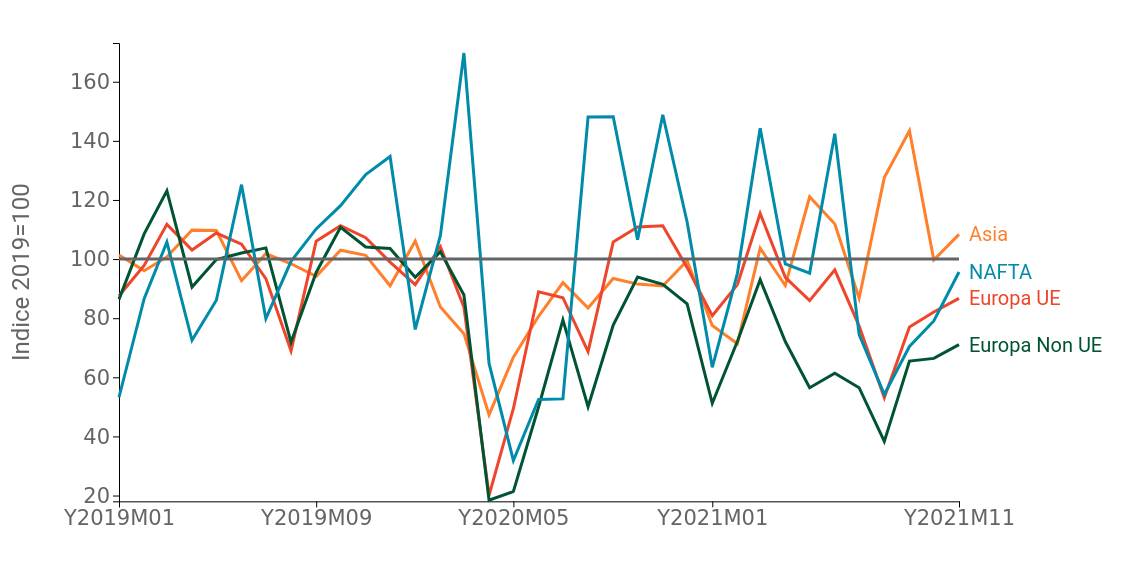 
The difference in terms of imports from the various geographical areas is even more marked if we break down the data for individual countries. While American exports of motor vehicles to EU states went from a value of 8 billion dollars in the first eleven months of 2019 to a value of 7.8 billion in the same period of 2021 ( -4% ) , purchases from the main Asian partners showed a significant increase; in fact, imports from China and South Korea went from 722 million dollars to 4.7 billion and from 6 to 6.4 billion respectively.

Furthermore, it may be useful to analyze which product categories are contributing the most to Asian performance. By investigating the dynamics of the two main sectors of the sector, namely the production of "traditional" and electric motor vehicles, it is possible to highlight the different trend of the former compared to the latter: if the "traditional" motor vehicles imported from Asia remain below the base value of 100 for the period considered, electric vehicles are responsible for the increase in Asian trade shares on the European market. 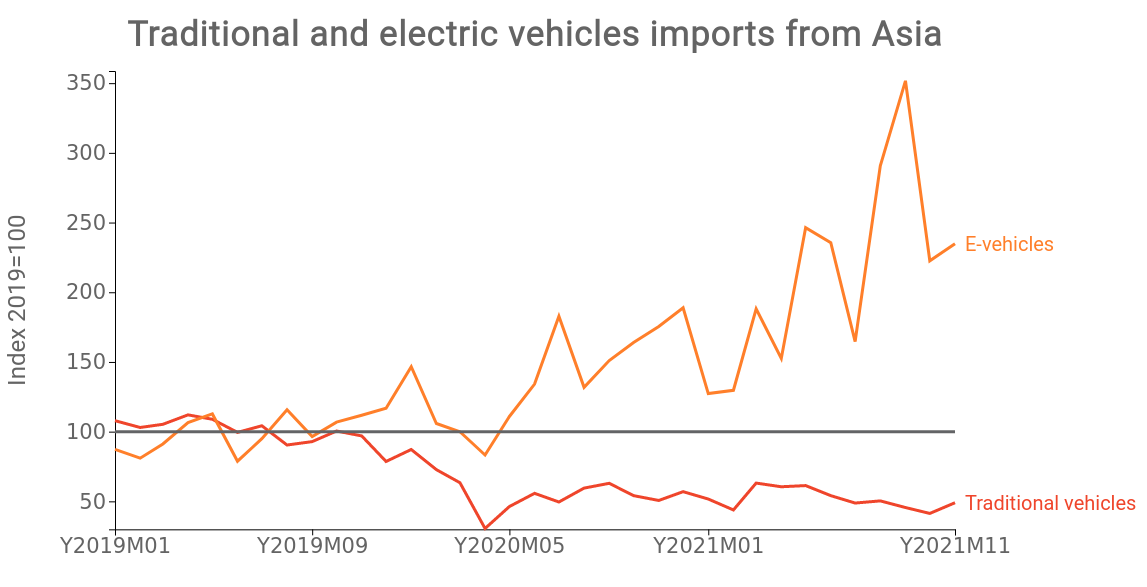 
During 2021, Asian value chains seem to have demonstrated greater resilience than European and American ones, especially in the second half of the year, maintaining a strong specialization in electric vehicles manufacturing. Monitoring foreign trade data and those on registrations will make it possible to anticipate possible future developments.