General slowdown in the pace of growth, which nevertheless remains generally positive

In the first quarter of 2022, world trade confirmed the signs of a slowdown already highlighted at the end of 2021. In particular, in the first three months of the year, world trade in goods, while confirming an upward trend in constant prices, showed a further deceleration in the pace of development, falling from +9.9 per cent trend in Q4 2021 to +4.9 per cent Y-o-Y trend in the most recent quarter.

Considering the average performance in 2021 (when world trade grew by 19 per cent in constant prices), the slowdown is particularly significant. Moreover, the slowdown appears to be rather generalised across industries. 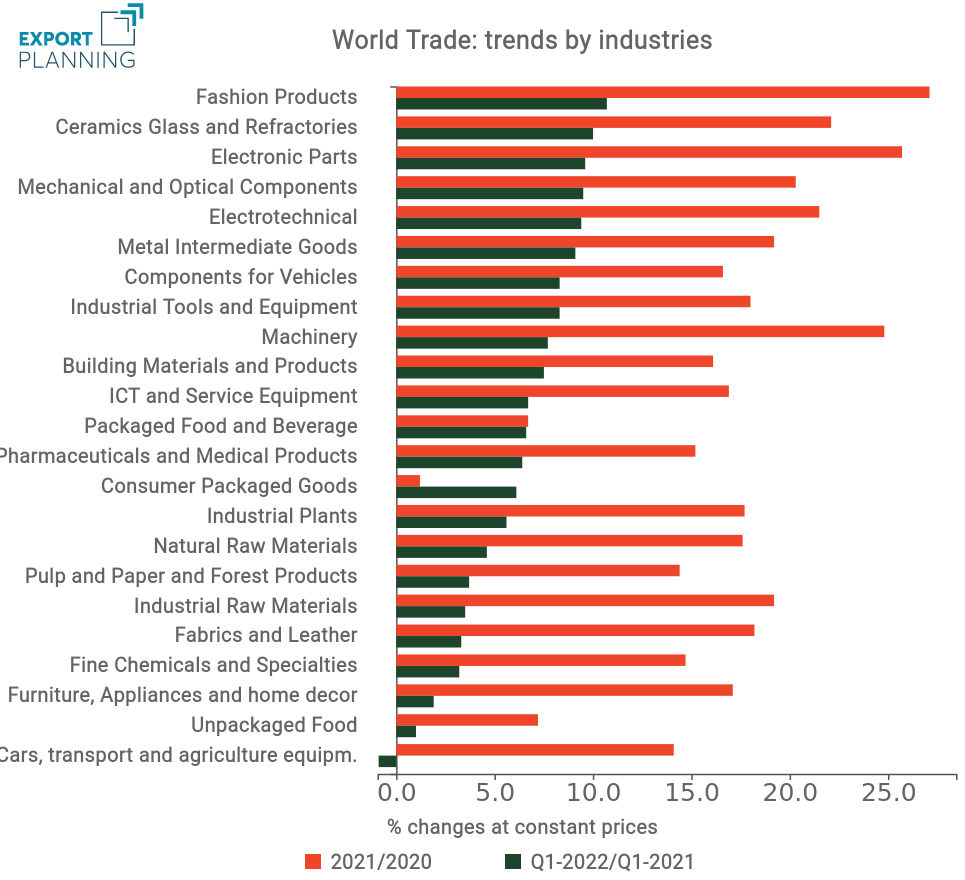 On the other hand, there are a number of industries that do not see any significant slowdown, but rather in some cases accelerate. This is the case, for example, of Consumer Packaged Goods, which - after a 2021 that had recorded weak growth in world trade at constant prices - in the first quarter of the year increased its growth rate by 5 points (rising to +6.1% at constant prices). Also worth mentioning is the case of the Packaged Food and Beverages industry, which in the first quarter of the year (+6.6%) essentially maintained the same trend rates of world trade that had characterised 2021.

Although further slowing down compared to previous quarters, the first three months of 2022 showed world trade still growing at constant prices. All the industries analysed (with the sole - albeit limited - exception of transport and agricultural equipment) all recorded a "plus" sign in the trends for the first quarter of the year, demonstrating that, to date, world trade has not been in recession.
However, there is no doubt that the recent rate of growth has slowed down compared to last year, which was also a special year - marked by a technical "rebound" in the second quarter of the year (a recovery from the Great Lockdown of Q2 2020). Moreover, it should of course be stressed that this is a period that has not yet been significantly impacted, on the one hand, by the beginning of the Russian-Ukrainian conflict and, on the other, by the extensive lockdowns imposed by the Chinese authorities on Shanghai to counter the resurgence of the pandemic.

Therefore it will be important to observe the evolution of world trade in this second quarter of the year in order to understand whether the foreign channel can continue - despite elements of uncertainty in the most recent period - to make a positive contribution to the development of world economies.

In the meantime, it is strategic for exporting companies to be able to measure the performance of the various markets in which they operate and assess their own performances against that of the various competitors present in these markets1.

1) For this purpose, see ExportPlanning's Market Barometer tool, which allows, for a given product/sector/industry and market, to monitor the quarterly sales evolution of the different (country) competitors on the market.