The availability of the ExportPlanning pre-estimates for the first nine months of 2022 - accessible via the World Trade Datamart - makes it possible to document the cyclical situation of world goods trade, in an international context strongly marked by the uncertainty of the Russian-Ukrainian conflict, increases in commodity prices and significant inflationary pressures.

As already reported in the article "Even in Q3 2022 the phase of uncertainty in international trade continued", world trade is giving way to a gradual slowdown in the pace of expansion of recent months. The graph below shows the monthly series of world trade in manufactured goods in quantity, comparing data collected and systematised by ExportPlanning with that of the Central Planning Bureau, an institute that in turn collects and processes information on international trade in goods. 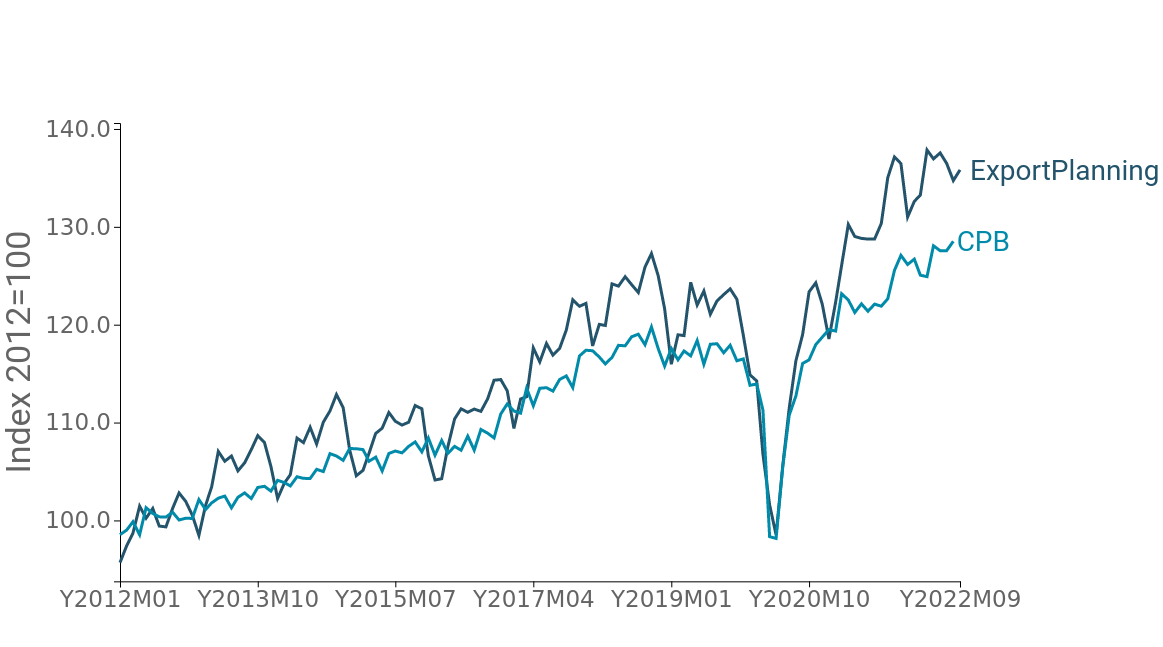 Both series make it possible to highlight how world trade in goods, although now at levels well above - at constant prices - pre-pandemic levels, since the most recent months seems to be progressively converging towards a phase of relative trade stabilisation. Overall, the latest ExportPlanning estimates show an increase in quantity of 6% compared to the same period last year. However, this result can be attributed to a more positive first half of the year, which partly drives the overall increase for the period, alongside evidence of a more marked deceleration from the third quarter onwards.

Also confirming the signs of a slowdown in international trade are the findings of the global manufacturing Purchasing Managers Index, a 'real-time' indicator of economic performance, which summarises the outlook for industrial activity levels based on companies' purchasing declarations. The indicator shows signs of a slowdown for all major economies, with the world aggregate hovering below the neutrality threshold of 50. In particular, both China and Europe have been below this threshold since early summer, while the US has only been below it since the most recent month.

Particularly significant is the New Export Orders component of the Global Manufacturing PMI, which is more closely linked to the dynamics of global trade in manufactured goods, which is also trending below that of the aggregate index. The indicator, in fact, registers values below 50, signalling how new orders from abroad received by companies around the world have entered a deceleration phase.

In order to break down the picture of the slowdown in sectoral terms, the graph below positions on the x-axis the change a recorded by the main industries driving world trade in the six months of 2022, while the y-axis shows the trend change recorded in the third quarter of 2022 compared to the corresponding period of 2021. Through this representation, it is possible to distinguish in the upper left-hand section of the graph those sectors that have accelerated, and in the lower right-hand section those that instead appear to be experiencing a slowdown in the pace of growth.

The graphical representation shown at constant prices, i.e. net of exchange rate and price changes, makes it possible to highlight several particularly interesting aspects of the current economic phase. Firstly, the slowdown that is affecting several categories of intermediate goods appears particularly significant: the chemical (B5), paper and wood (B3) and mineral and metal intermediate goods (B4 and B6) industries, whose growth rates appear to be well below those recorded in the first six months of the year.
On the consumer goods front, those industries that experienced strong growth during the pandemic period, first and foremost Health Products (E4), but also Home System (E3) and Agro-Food (E0), are slowing down, and may now be moving towards a normalisation of their pace of expansion. In this cluster we also find ICT Equipment and Tools (F1), the only capital goods industry to lie below the yellow bisector that divides the accelerating and slowing sectors.
The Automotive (F3 and D3) and Personal Goods (E2) industries held up better, mainly because the recovery of what was lost in 2020 in these segments was more gradual and progressive.