EU exports slow down sharply in fourth quarter 2022, both in value and quantity

The availability of ExportPlanning pre-estimates for Q4 2022 foreign trade data of EU countries -accessible through the EU Countries Conjuncture datamart- allows us to have an estimate of the year-end export performance of the Old Continent.
The year 2022 was marked by several critical events for European economies, such as the war in Ukraine, the energy crisis and the soaring costs of major commodities. These events have added to the uncertainty of the global economic scenario and led major international institutions to predict a sharp slowdown in trade, especially in the second half of the year. Against this backdrop, what then is the situation of major European exporters?

The graph below shows the changes in Union exports in both value (euros) and quantity (kilograms), in order to try to cleanse the data from nominal changes related to price increases and the depreciation of the euro, which occurred during the year. 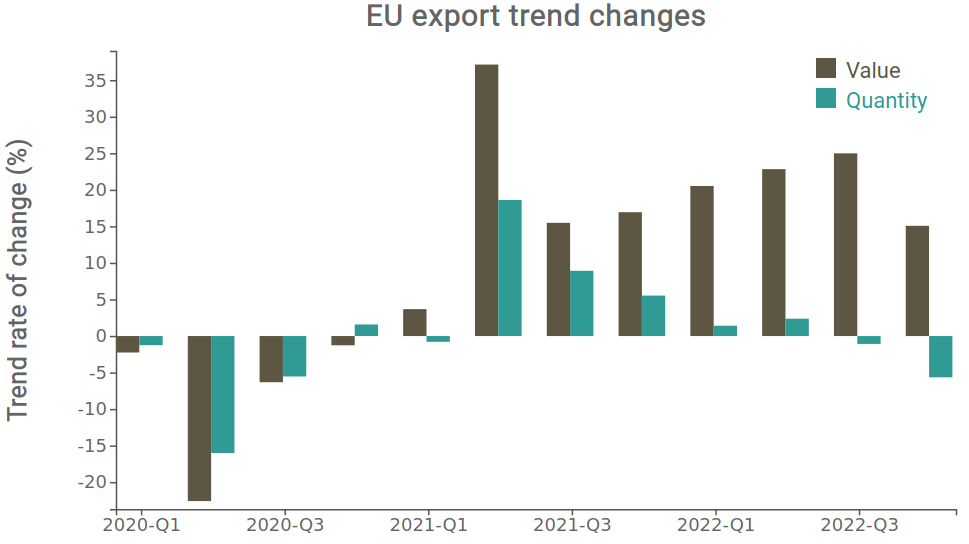 As we can see, since the second quarter of 2021 EU exports in euros had begun a period of strong recovery, culminating in the third quarter of 2022, when they marked a +24% trend increase over the third quarter of the previous year. Since the fourth quarter of 2022, however, the slowdown is evident, with the trend change falling to 15 percent.
Reading the figure in quantity, which, despite suffering from a homogeneity problem in expressing all products in kilograms, still manages to approximate the real effect. European exports in quantity have declined gradually over the past year and a half, eventually entering negative territory as early as the third quarter of 2022 (-1 percent). In the fourth quarter the decline intensified further, bringing the trend change to below -5%.
This highlights that, especially in this historical period, it is essential to look at trade data by trying to eliminate the nominal component where possible in order to get a more complete and truthful picture of the world economy. The forthcoming publication of ExportPlanning's World Conjuncture database will allow us to read the phenomenon in constant prices as well.

Although the European decline has been mostly across the board, there are differences among the different competitors, which have taken the lead in various government measures to stem the tensions on the energy and inflationary side.
The graph below shows the annual trend rate of change (2022 over 2021) in exports of major European countries (sorted in descending order of importance), both in value and quantity. 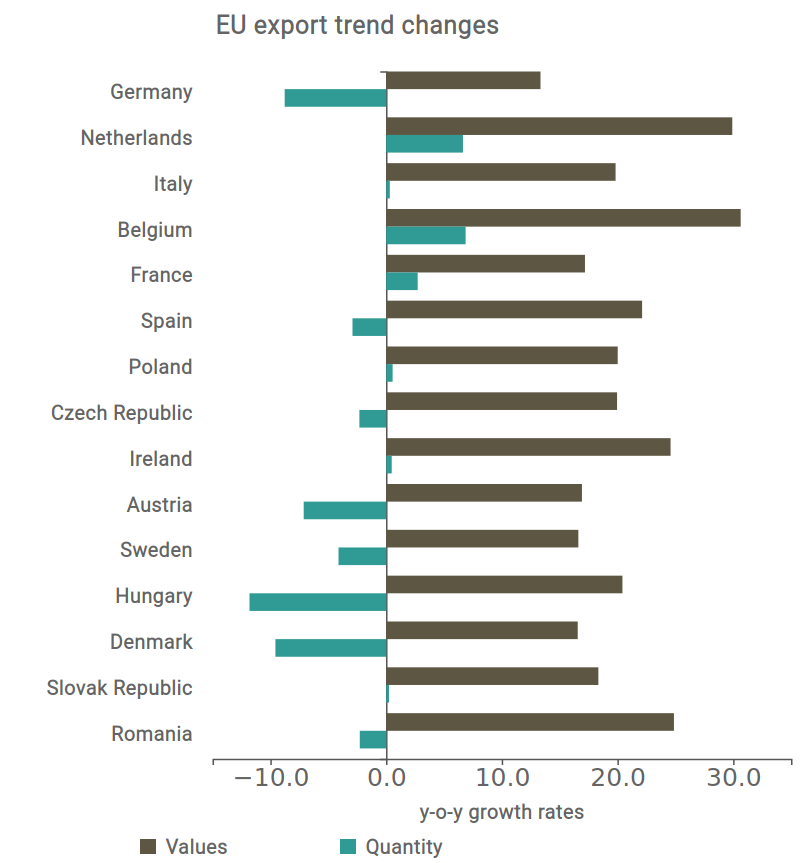 Observation of the graph immediately shows that Germany, Europe's leading exporter, has been particularly hard hit by the events of recent months: with an annual growth rate of 13 percent it ranks below all the continent's main competitors. In values, Italy remains within the European average, as do France, Spain and Poland. Particularly significant is the fact that Italian exports in kilos at the end of the year remain in positive territory as the best performers for the period. Still from the point of view of quantities, we find Germany among the countries with the most significant drop in kilos with a -8.8 percent year-on-year.

To get a clearer idea of the Italian situation compared to the leading European competitor, the following graph compares the sectoral growth from made in Italy in 2022 with that of Germany.

Most sectors are positioned above the bisector indicating that Italian performance has outperformed that of Germany, highlighting a relative resilience and robustness of the Belpaese result.
Particularly interesting is the relative alignment of the results marked in the automotive sector (F3) and related components (D3), reflecting the deep supply chain ties between the two countries. The same can be seen in the home system (E3), which is particularly affected by energy costs and the phenomenon of normalization of world demand.
As anticipated, on all other fronts in the case of both capital goods and consumer goods, exports of Italian companies outperformed German results.

The war in Ukraine, inflationary pressures and rising commodity prices have profoundly affected the dynamics of 2022. The effects are evident both in the fourth quarter and in the annual cumulative, especially when analyzing quantity values, which show negative levels starting in the third quarter of the year. In the coming months, it will be crucial for European countries to monitor the economy and the changes taking place to try to stem the recent difficulties.