After the rejection by the British government of the agreement reached by Prime Minister May with the European Union after an 18-month negotiation, Brexit continues to be one of the most important factors of uncertainty in the current economic situation. The possible alternatives to the British government are substantially three: a new vote on the previously defeated agreement or the hypothesis of a no-deal , or, if they both fall, a vote for a postponement of the deadlines of 29 March.

In any scenario, the UK's exit from the EU will certainly lead to an increase in existing tariff barriers, and such restrictions might have a significant impact on the economic sectors most closely linked to trade flows with the EU.

Indeed, the European Union represents the UK's main trading partner, for example, in 2018 British imports from the EU exceeded € 300 billion. Thanks to the single European market, intra-Union trade has so far benefited from free-tariff policies, which have resulted in a significant integration of trade flows and value chains in the two economic areas. 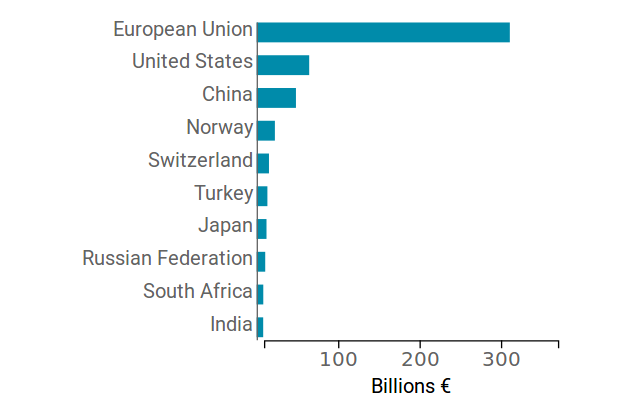 Although it is particularly difficult to estimate the potential effects of Brexit on the British economy, it is useful to map the British sectors most dependent on European exports, for showing the areas that might be affected to a greater extent by a Brexit risk.
The graph below shows the twenty most exported products from the EU to the English market; this allows us to conduct an analysis of the most exposed sectors:

Grafico 2: Most exported products from the EU to the English market 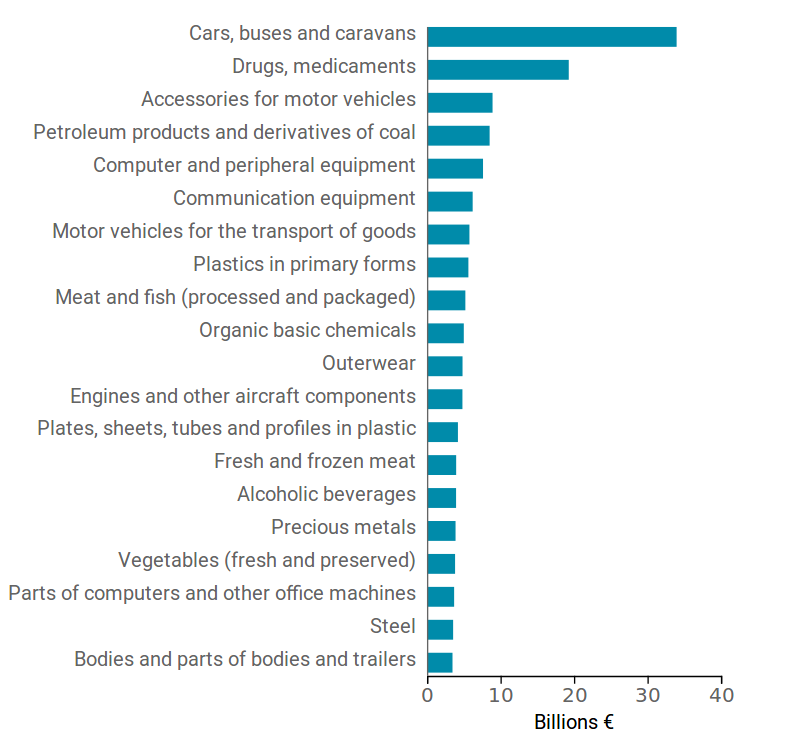 The first sector to highlight is the automotive one.
As shown in the chart, the English market significantly imports both means of transport (passenger transport and goods transport), and vehicle components. European partners such as Germany, Belgium and France, in fact, are not only among the leading exporters of cars on the British market, but are deeply integrated in British value chains, given the significant share of vehicle components exports.

A second sector deeply linked to European Union trade flows is the industrial raw materials one. In fact, the United Kingdom imports petroleum products and coal derivatives, organic basic chemicals, plastics, precious metals and steel for the industrial processes. Also in this sector, among the main European trading partners, the Germany stands out, followed by Netherlands and Belgium.

A third sector characterized by a strong link with European export flows is the pharmaceutical industry.
The European exports to the British market have experienced a dynamic growth, supported by German and Dutch exports.

The ICT and agrobusiness sectors complete the review of the most exposed sectors to a Brexit risk.
For the ICT sector, the UK imports computer products and telecommunications equipment from the EU, and Netherlands is the main European partner. However, for the sector the main player on the market is China, which could gain important market opportunities.
In the case of food and beverage industry, business partners such as France, Germany and Italy represent the UK's main trading partners for the export of consumer products such as meat, fish, vegetables, legumes and beverage.

The sectors previously listed represent, therefore, the sectors that in the short term might be more affected by the costs of a tariff introduction following Brexit. To these must be added all the industries whose exports are deeply tied to the European demand for goods, which could experience a significant reduction after an increase in tariffs.

It is therefore strategic for European SMEs operating with the United Kingdom to prepare for the UK withdrawal from the EU, broadening their foreign markets portfolio and observing the guidelines shared by the European Commission.