After months of stability, the currency is weakening again.

The Argentine Peso, a historically weak currency, has been one of the main victims of the emerging-market capital flight that occurred last year. Excluding the extreme case of the Venezuelan Bolivar, which suffered a depreciation against the dollar amounting to more than one million percentage points in 2018, Argentine Peso was the hardest hit, losing almost 100% of its value against the greenback.

Loans granted by the International Monetary Fund in the framework of the Stand-By Arrangement signed in June had a major impact on currency stabilization, together with the progressive implementation of the agreed reforms. Up until now, the IMF has provided Argentina with more than 28 billion dollars in 3 tranches.
As regards reforms, on the monetary policy side the Banco Central de la Republica Argentina (BCRA) has adopted a more restrictive stance, which aims to support the currency and keep inflation under control. One of its tools is the issuance of LELIQ, securities denominated in pesos.
On the fiscal policy side, the budget for 2019 has been approved in November: it included public spending cuts previously agreed with the Fund to obtain the loan. This has certainly been an unpopular move for President Macri, but at least it helped restore some market confidence in Argentina.

February 2019: a new phase of weakening

The root of this renewed weakness on the exchange rate front is the difficulty on the part of monetary policy authorities to significantly reduce inflation. After some weak progress in the last months of 2018, in the first two months of this year inflation accelerated again, as you can see in the graph below. In February, prices increased by 3.8% compared to the previous month. 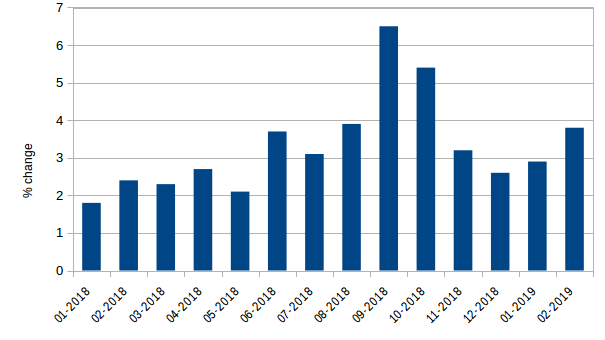 The immediate response of the central bank was a rise in monetary policy reference rate, now back above 60%. However, such a restrictive approach puts the economy at risk: Argentina’s GDP has already suffered a 4.2% contraction in Q2-2018 (year-on-year) and 3.5% decrease in Q3. This approach jeopardizes the re-election of President Macri, as well, since October presidential elections are approaching.

In addition to inflation, the new Peso crisis also seems to reflect widespread concerns about the possibility of a slowdown in global growth, and the consequent increase in risk aversion.
A further cause for concern has emerged in recent weeks, i.e. the high amount of LELIQ debt issued by the central bank: more than a trillion pesos in mid-March (more than 20 billion dollars). Given the current high interest rates, this stabilization tool could turn out to be a source of instability in the medium term, exacerbating Argentina’s critical situation.