Comparison between Italian and district exports

The aggregation of companies in industrial districts still allows for better export results than the national average.

A few days ago, ISTAT (National Institute of Statistics) has published the exports results of the fourth quarter 2018 of the Italian provinces: to general level, the exports have recorded an increase of the 3.3% annual, accusing a deceleration in comparison to the course of the 2017. As always, the national dynamics is derived from the results of very dissimilar performance between the different sectors and territories. Among the most positive results, three industrial districts are results above the average and will shortly be described in this article: the "Pelletteria di Firenze" (Florence), the "Wines of the Langhes" (Cuneo) and the "Calzature of the Brenta" (Venice).

The district of the “Pelletteria di Firenze” represents a point of diamond of the Italian tanning production. It is formed by enterprises with own mark and by external enterprises of the principals world marks of fashion, to which artisan shops are placed side by side with elevated specialistic competences. An important role to maintain the elevated level of competences of the district is developed from the “High School of Pelletteria Italiana”. This institute, founded in 2005 in the Florentine territory, has safeguarded and protected the tanning art and it has made possible the stable growth of the whole Florentine compartment. 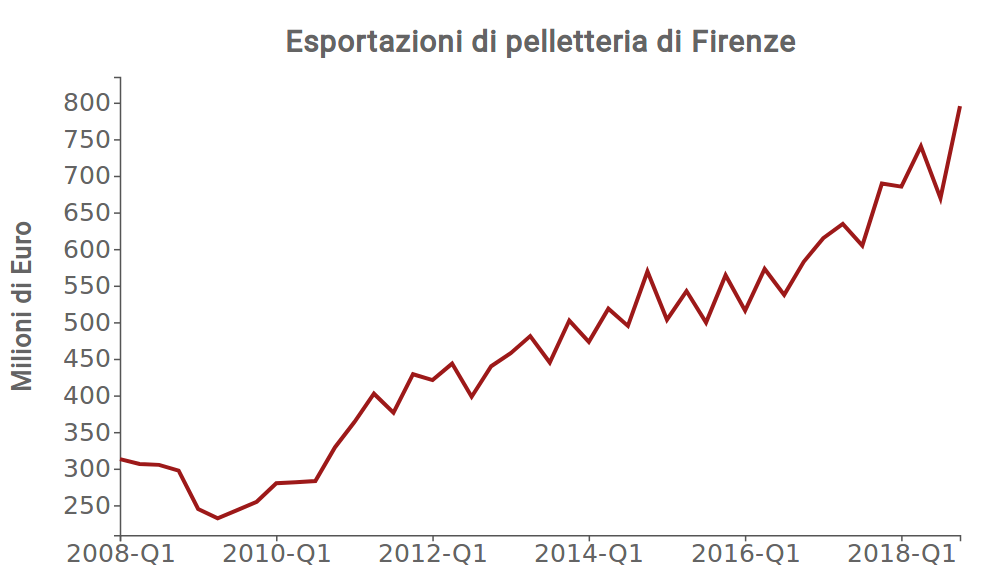 
The district of the Pelletteria di Firenze, with a quarterly export value that has reached the 800 million, has drawn near in the total one of 2018 to the 3 billion, with an annual increase of the 13.6% .This result is inserted in a consolidated trend of export intensification and the annual average growth of the district is 9% since 2008.With these numbers, the Tuscan district places among the best in Italy to performance level of the fashion system, confirming its sectorial leadership.
The main export market of the district is Switzerland, but it is also used as logistic pole by some firms. The contribution of the tourism is also important, as it results from the many French and American tourists in visit in Florence that appreciate the art and the products.

The Langhe area extends between the provinces of Cuneo and Asti, with a predominance of the Cuneo municipalities.We are talking about a territory that abounds of a lot of excellences foods and wines, known and searched all over the world.In the hills rich in ancient vineyards varied qualities of wines are produced, spacing from the most famous Barbera or Nebbiolo to the least known Arneis or Moscato. 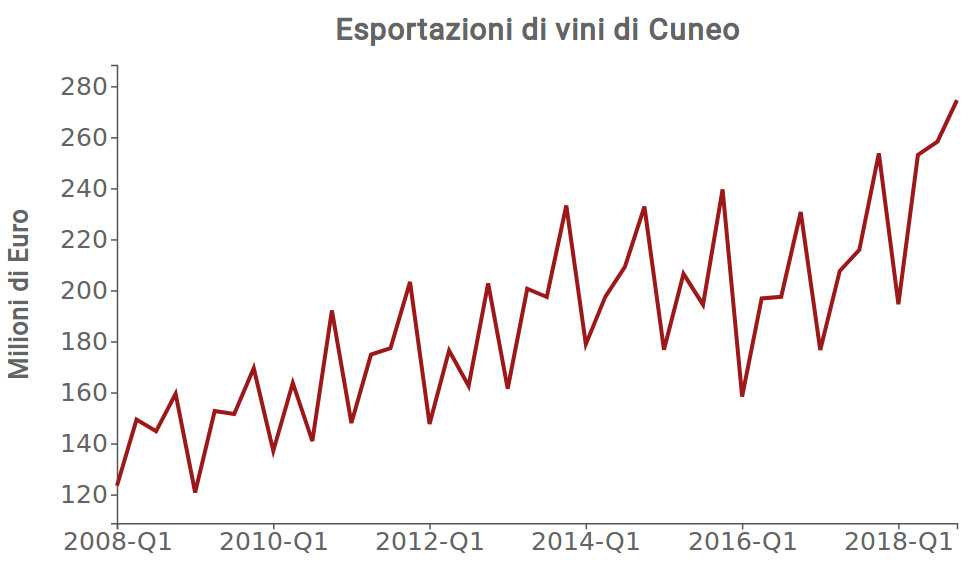 
The "Vini delle Langhe, Roero and Monferrato" district represents a center of absolute excellence in the Italian agri-food sector. In 2018, wine exports in the province of Cuneo recorded an increase of 14.8%, reaching a quarterly value close to 280 million at the end of the year. Also in this case, the most recent results are inserted along a ten-year trend of high growth.
The investments in communication and promotion effected by the institutional organs and by the enterprises of the district have sustained these results.
A meaningful support to the export of these wines has been transmitted by the recognition of the landscapes of the wine hills of the Langhes as World Patrimony of the Unesco in 2014, to which so many international visual operations are added, among which, for example, the arrival of one of the last tappes of the “Giro d’Italia” last year.
The countries that mostly import Cuneo wines are Germany, United Kingdom and the United States of America. 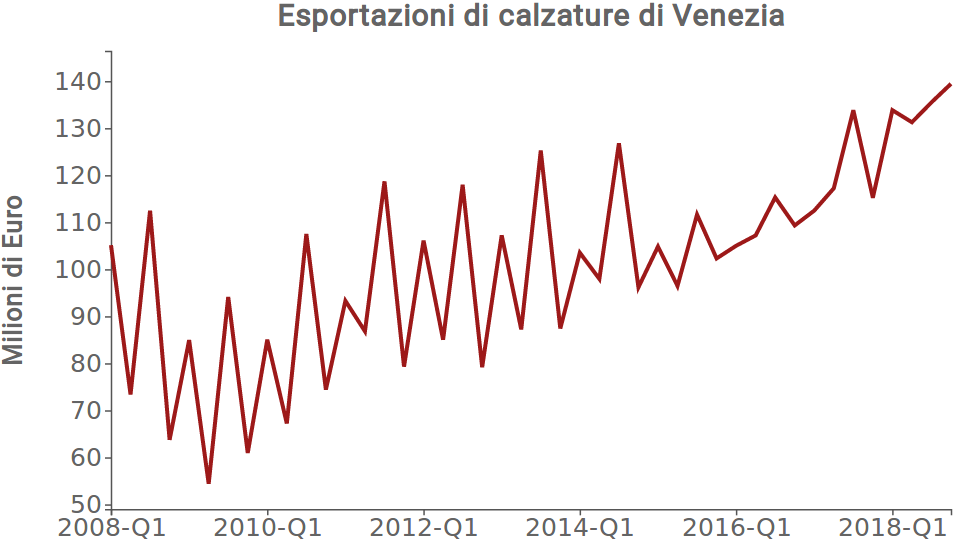 
In Veneto, between the provinces in Venice and Padua, there is the district of the "Calzature del Brenta", formed from more than 500 enterprises and 10 thousand of employees and whose production is for 91% tied up to the export. Then it isn't a surprise that this district results as one of the best among the exports of footwears to the foreign countries. Particularly, the calzaturificis of the Venetian province, in 2018, have recorded an increase of the +12.8% in comparison to the results gotten in the 2017. Also in this case, the appreciates Made in Italy offers a big impulse to the district, that, in the last years, has reached important commercial accords with some famous fashion Franch brands, to which a lot of footwears are addressed. The variety of present enterprises, some most automated and others less - these last ones realize handicraft products - allows to the district to be able to cover ample bands of price and to export in many foreign Countries.
The results of the 2018 of the Venetian part of the district are inserted in a long trend of growth started in 2010, that has brought the quarterly exports to reach the 140 million of European.

With 51.7 million consumers and a high-spending middle class, South Korea is rightfully among the most attractive markets for wine exports in Asia [ Read all ]

In the third quarter of 2021, for the first time, Italian exports overtook French exports [ Read all ]