The analysis of world imports of high quality goods between 2010 and 2018 makes it possible to identify three groups of interesting markets.


In this article, attention will be focused on the last group of markets. Which categories of products have led the growth of quality imports? Which factors are supporting this increase?
In Qatar, among high and medium-to-high quality imports, consumer goods prevail with a share close to 50%. In Ireland, imports of consumer goods (over 30% of the total) are joined by investments’ imports, with a share close to 60%. In Vietnam, instead, imports of high-quality components and intermediate goods prevail (2/3 of all quality imports). 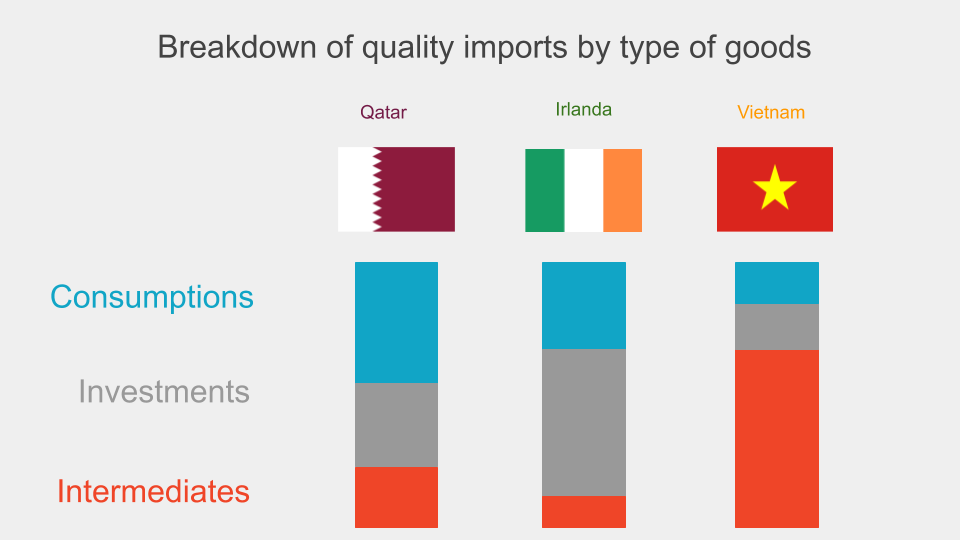 Qatar: international openness and the formation of a middle class support the consumption of luxury goods.

Qatar represents one of the most dynamic and growing realities in the Persian Gulf region, with an high per capita income (68 thousand dollars in 2018) and an expanding economy, supported by oil revenues and long-term innovative policies.
Imports of high and medium-to-high quality goods more than tripled in the last decade: from 5.7 billion dollars in 2010 to 20.4 billion dollars in 2018. Already in 2010, consumer goods accounted for the lion's share of quality imports; this share further increased by 10 percentage points in the following years, reaching 46.1% in 2018. This reflects the formation of a new class of "rich" consumers, who allocate part of their income to the purchase of luxury good.

The factors that have supported this development must be searched within a series of measures adopted by the Emirate. First of all, in 2004 the country progressed towards internationalization, through a constitutional recognition of the right to private property and commercial freedom. The government has also removed customs tariffs on the importats of certain products, as well as quantitative restrictions on imports.
The definition of the national program "Qatar National Vision 2030", containing the guidelines for the country's greater economic diversification, dates back to the end of the last decade. Significant resources have been allocated to the implementation of construction/infrastructure, transport/logistics projects. Furthermore, important investments were made in the education, health and tourism sectors - also in view of the 2022 World Cup.

Ireland: the modernization of the economy is supporting the demand for high-quality investment assets.

Ireland is the best European country for doing business, thanks to low taxes and incentives provided for hiring, training and research investments; these advantages attracts multinationals enterprises from all over the world. Their presence has produced strong effects on the country's economic growth, as shown by the data on GDP per capita at current prices, which increased steadily from 2012 to 2018. In 2018 it reached 75 thousand dollars.
The "Celtic Tiger" has managed to recover from the severe blow inflicted by the financial crisis in 2009, thanks to a series of drivers, including an increase in domestic demand no longer directed only to consumer goods, but also strongly oriented to investment assets (means of transport, office machines and equipment, computers and peripheral units, communications equipment). This turnaround was recorded by Ireland quality imports: in this decade, the share of consumer goods declined (from 50 to 31%), while investment assets share reached 60% in 2018.

Vietnam: the new Asian factory imports high-quality intermediate goods to support the upgrading of its production.

Vietnam has a very low per capita disposable income: 2.6 thousand dollars in 2018. In this century, Vietnamese economy has experienced a conversion from a system based on agriculture to a highly competitive industrial economy, whose competitiveness is not only on the side of labor costs.
The economic progress of Vietnam was the result of a policy of renewal (Doi Moi, literally "New Economy"), as well as a process of reforms. Huge investments have been made to adapt local infrastructure to international quality standards; several commercial partnership agreements have been signed, in order to ease trade making more markets accessible.
The industrial policy has also directed the production towards consumer goods and focused on the training of qualified personnel, e.g. through collaborations with universities and local technical institutes. The aim was to develop an industry able to manufacture high and medium-to-high quality products, as well. A strong factor supporting the qualitative upgrading of Vietnamese production was the use of quality inputs, imported from abroad. The demand for components and intermediate goods of high and medium-to-high range has increased at exponential rates: in 2018, their share represented over three quarters of the total quality imports of the country. The effects on the quality of manufacturing production were significant, so much so that Vietnam was able to export over 80 billion dollars in high and medium-to-high quality products in 2018.

Analysis of the determinants of market price dispersion [ Read all ]