Trade War is Holding Economies Back: Central Banks are Running for Cover

Great uncertainty on currency markets this week. Safe-haven currencies, such as Swiss Franc and the Yen, have strengthened, while the depreciation of the Pound continued. The dollar slightly depreciated against the euro. 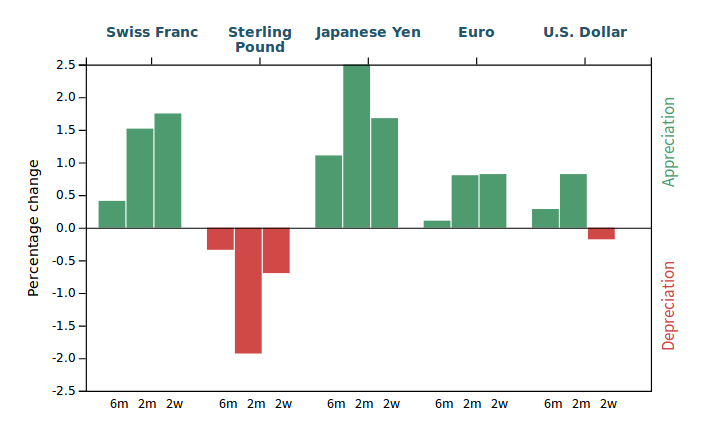 Monetary policy has dominated the economic discussion. News from a number of countries show a slowdown in normalization trends: it looks like several bank are back to accommodative stances. The reasons for these decisions are broadly common: economic slowdown, in a context of prolonged uncertainty (caused, first of all, by trade war).

Yesterday the ECB Governing Council met in Vilnius. Key messages from the meeting can be summarized as follows:

The decision of the European Central Bank fits into a framework of downside risks and prolonged uncertainty linked to geopolitical factors and a growing threat of protectionism. This has been weighing on economic sentiment and growth prospects in the Eurozone. The growth forecast for the Eurozone in 2019 continues to be modest (latest forecast: 1.2%) and inflation is far from the 2% target (latest forecast: 1.3% in 2019).

Trade war: the FED is running for cover

This week, the FED showed a dovish stance, as well. On Tuesday, Powell said that the US central bank is open to a rate cut if necessary – i.e., if the US-China trade dispute gets worse, producing negative consequences for the US economy. The FED therefore declared its willingness to intervene, serving the primary objective of supporting economic growth, full employment and price stability.

Russia, Australia and India are joining the choir

The ECB and the FED are not the only ones adopting an accommodative monetary policy approach. Similar messages come from Russia, as well. On Thursday, the president of the Central Bank of the Russian Federation, Elvira Nabiullina, speaking at the International Economic Forum in St. Petersburg, said that during the next Monetary Policy Meeting, scheduled for June 14, the bank could lower rates for the first time in a year. The conditions of the economy would allow such a chioce, given that inflation is slowing down and rates are currently above a "neutral" level: as a matter of fact, in 2018 they were raised twice (in September and in December).

This week, the Reserve Bank of Australia cut its reference rate from 1.5% to 1.25%, as expected. Factors supporting this choice were, among others, increased downside risks in relation to growing global trade tensions, inflation and unsatisfactory wage growth.

Another example of this trend is the Reserve Bank of India (RBI), that moved yesterday from a neutral monetary policy stance to an accommodative approach. The RBI cut its repo policy rate by 25 bps, reaching 5.75%, in order to support aggregate demand and growth. The Monetary Policy Committee has in fact noticed that economic growth has recently been slowing down in India, as well as investment activity and private consumption.