One event that made headlines in this week’s financial talk was a significant reduction in the reference interest rate made by the Central Bank of the Republic of Turkey (CBRT). Yesterday, the Monetary Policy Committee decided to cut the rate by 425 basis points, from 24% to 19.75% - a higher reduction than expected by the majority of analysts.

According to central bank statements, the reasons behind their decision can be summed up as follows:

Turkish lira on the upswing

The slowdown in inflation, one of the key forces behind depreciation, can be also inferred from the dynamics of the Turkish currency. After reaching its peak of maximum weakness against the dollar in early May 2019, the lira has strengthened since then and recovered almost 10% of its value against the greenback. 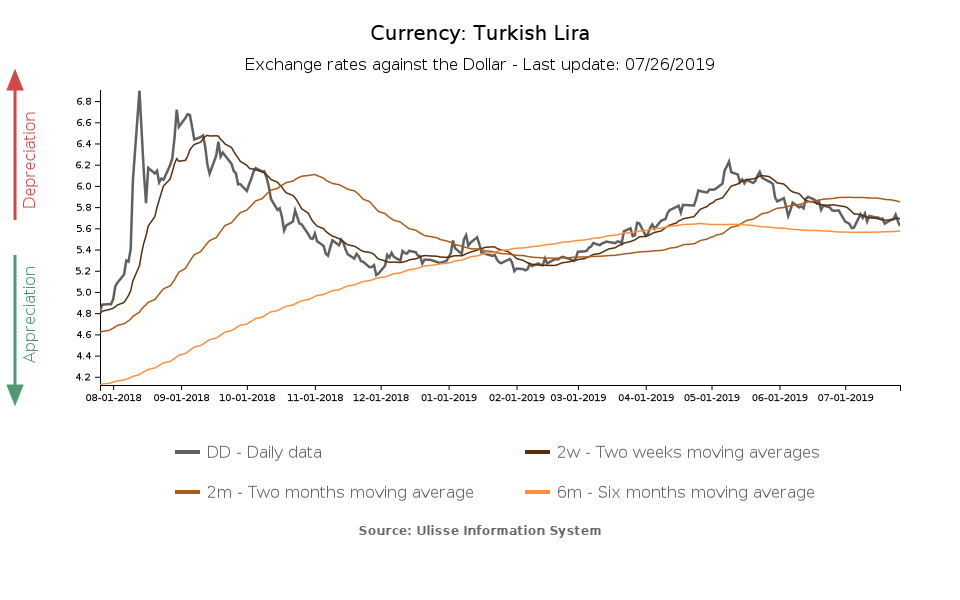 Despite a general improvement, the exchange rate risk associated with the Turkish lira remains high. The new Exchange Rate Risk Index available on ExportPlanning provides a comparative measurement: in a list of 150 currencies, ranked according to their depreciation risk (from lowest to highest), the Turkish lira ranks 68th.

So, what are the main factors weighing on the exchange rate risk associated with the Turkish currency? On the basis of the theoretical model underlying the calculation of our index, the causes can be summarised in the following graph.

The graph shows that political risk is one of the elements weighing the most on Turkish exchange rate risk outlook. A good example of this is the recent dismissal of Cetinkaya, governor of the central bank of Turkey, who was promptly replaced by Uysal. According to Reuters, Cetinkaya was fired because - in the words of President Erdogan - he failed to follow the government’s policy instructions.
It's well known that the Turkish government does not appreciate restrictive monetary policies. More in line with government sympathies, the first move by Uysal, the new president of the central bank, was a drastic reduction in rates.

Other elements highlighted in the chart seen as drivers of possible exchange rate risk are inflation and foreign exchange reserves. Although it is slowing down, inflation is still high, while FX reserves are judged to be insufficient by IMF standards.

The role played by institutional quality is lesser, but nontheless, it is still significant: in the face of deterioration, investors could flee Turkish assets, a factor that would in turn push the Turkish currency towards depreciation.