The slowdown of the Eurozone manufacturing sector weighs on the currencies

Polish zloty and Hungarian forint have been weakening in the last months. As can be seen in the graph below, in the first half of 2019 the zloty experienced a phase of relative stability against to the euro, and then strengthened at the beginning of summer. The trend of the Polish currency reversed between the end of July and the beginning of August, when it lost more than 3% of its value against the single currency. Since the end of September, the zloty has experienced a partial recovery (+1.8%). 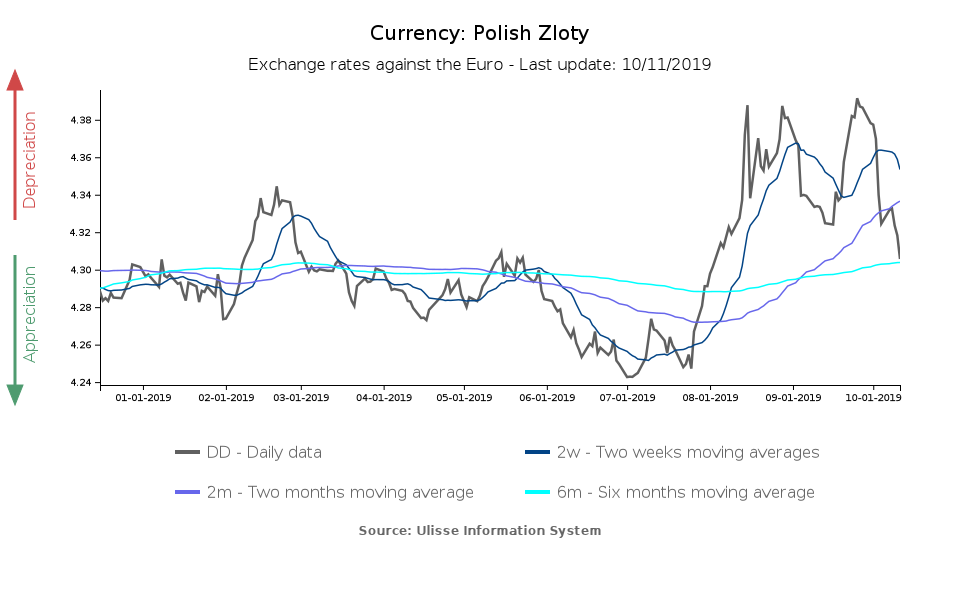 As regards the Hungarian currency, its dynamics is less fluctuating: the forint has been weakening since spring, losing almost 6% of its value against the single currency. 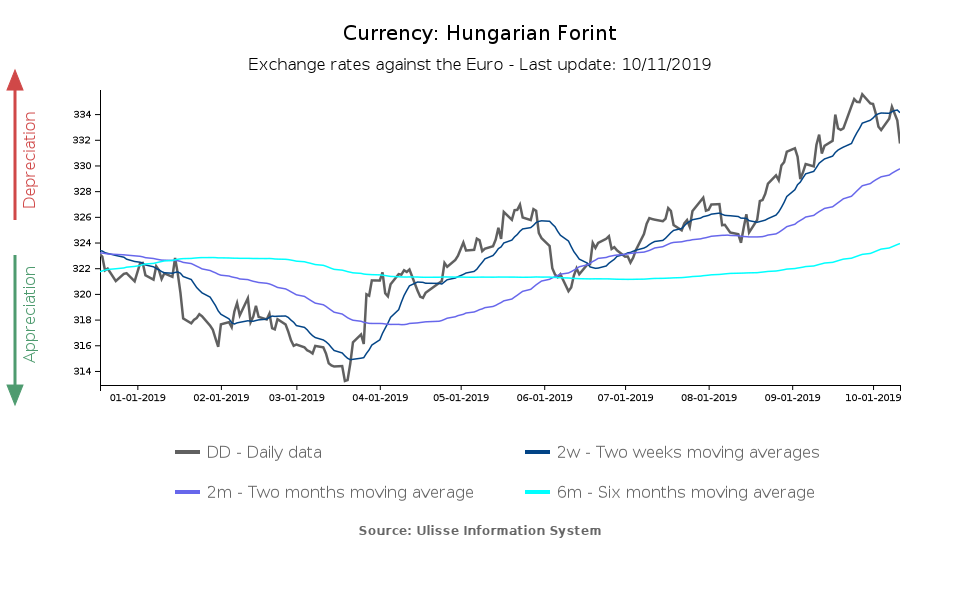 Which factors underlie the two weakenings?
Looking at economic growth data for Poland and Hungary, no signs of difficulty emerge, contrary to the tense climate in the major Eurozone economies. In the first two quarters of 2019, the Polish economy grew at solid rates, exceeding 4% y-o-y in both quarters, while in the case of Hungary y-o-y quarterly economic growth exceeded 5% in Q1 and Q2 2019.
The prevailing opinion points to the slowdown in the manufacturing sector of the neighboring Eurozone as main responsible for the weakening of the two currencies: in a context of widespread tensions, due to economic weakness and trade war, investors evidently prefer safe-haven assets (first of all, the dollar), to the disadvantage of riskier currencies.

The Eurozone manufacturing slowdown is confirmed by the Purchasing Managers’ Index, which has been declining since early 2018. In September, the index reached its lowest value in 7 years.

Worries in the banking sector weigh on the zloty

As for the Polish zloty, another reason for weakness was the recent re-emergence of a long-standing issue: mortgages denominated in Swiss francs.
In the early 2000s, in Poland (and several Eastern European countries) many citizens took out loans in Swiss francs, attracted by low interest rates. The 2009 crisis led to a collapse in the zloty, while the franc, as a safe-haven currency, showed a significant strengthening. As a result, loans became much more expensive.

Many Polish banks have been sued, on the charge of not providing sufficient information about the risk associated with these mortgages. Given the non-homogeneous decisions of the courts on the various cases, on October 3rd the European Court of Justice (ECJ) intervened and declared legitimate for Polish consumers to request the conversion of their debt into zloty. If there will be many requests, this could represent a blow to the country's banking system and consequently impact on the zloty.
In the run up to the ECJ decision, uncertainty has certainly weighed on the Polish currency.

Hungarian central bank does not fight the depreciation of the forint

As for the Hungarian currency, despite the weakening underway for several months now, the central bank (Magyar Nemzeti Bank, MNB) does not seem willing to intervene to support the currency. In its last monetary policy meeting, held on September 24, the MNB has in fact decided to leave the reference rates unchanged, since the weakening of the forint has not yet compromised price stability. Inflation amounted to 2.8% in September, within the fluctuation range set by the central bank.
A weaker forint can clearly be considered as an opportunity in terms of increased trade competitiveness.

Lastly, the recent dynamics of the two currencies could have been marginally influenced by the uncertainty factor relating to the upcoming elections: this Sunday, October 13, Poland will hold its parliamentary elections, while local elections will be held in Hungary. Nevertheless, uncertainty on this front is minimal, since the two populist and conservative parties in power - Law & Justice (PiS) in Poland and Fidesz in Hungary - are leading the polls.