Russian Ruble: a Phase of Stability

After a weakening recorded in 2018 and a recovery in the first half of 2019, the current year is about to end in the name of stability for the Russian currency. 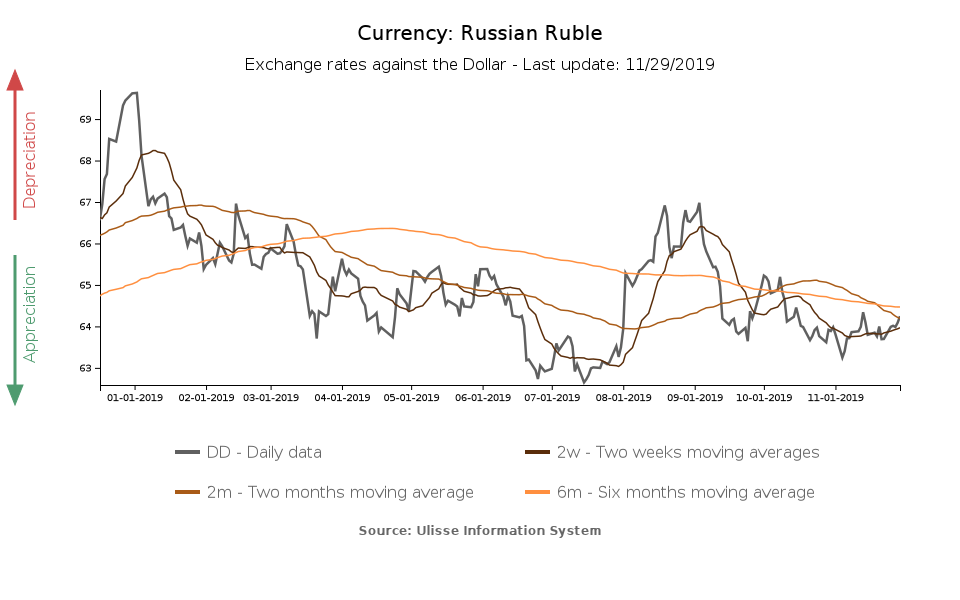 As you can see from the graph, the ruble experienced a brief weakening in August, and then recovered in the following months. Since October, the currency entered a phase of relative stability, marked by lower volatility compared to its average performance in recent years.

Which factors underpin the dynamics of the ruble?

This moment of stability is supported by different factors:

After having exceeded the 4% target between the end of 2018 and the beginning of 2019, in the last few months inflation has gradually decreased, thanks to the monetary policy action of the Russian central bank. During 2018, as inflation rose, the central bank has in fact increased its benchmark interest rate, and then progressively reduced it, in line with the improvement in inflationary prospects.

In the face of inflation rates back under control in October (+3.8%), below the central bank’s target and expectations, the Russian central bank carried out another interest rate cut, to 6.5%.
Improvements can be noticed on the economic growth front, as well. After recording weak growth rates during the year, in Q3-2019 the Russian economy grew by a solid 1.7% rate (y-o-y).

Geopolitical tensions have represented a source of weakness for the ruble in the last years, due to the imposition of international sanctions that have heavily penalized the currency (see what happened in 2014-15, following Russia's military intervention in Ukraine, or in 2018, when the US imposed its latest sanctions on Russia). In the last months, Russia has not been hit by new sanctions, thus sparing the ruble from hard shocks.

As you can see from PricePedia data, in the last few months no major variations in the price of oil have taken place. A drop in oil prices generally constitutes a source of risk for the ruble, since Russia is the world’s second major exporter of oil. Nonetheless, the recent introduction of a new “fiscal rule” in the 2019-21 Russian budget plan could, according to analysts, reduce the vulnerability of the currency to fluctuations in oil prices: for every oil barrel, profits exceeding 40$/barrel should go to the National Wealth Fund.
The government plans to start investing these resources when the liquid part of the assets will exceed 7% of GDP. For now, this represents just a precautionary measure, aimed above all at building a buffer to protect the Russian economy, in the face of the potential threat of new international sanctions.

Last but not least, the significant flow of foreign capital entering the OFZ market (Russian government bonds denominated in rubles) continues to represent an element of support for the currency.

Source: StudiaBo elaborations on The Central Bank of the Russian Federation data.

The share of nonresidents’ holdings reached 32% of the total market in October, the highest share since May 2018.