In mid-April the International Monetary Fund (IMF) released the latest World Economic Outlook (WEO), its macroeconomic scenario, which provides valuable insights into the expected evolution of the world economy. In relation to the spread of the Covid-19 pandemic and its economic impact, which is expected to be considerable, the scenario for the international economy in 2020 is quite dramatic. With a contraction of the global GDP of 3% for the current year, the Fund estimates that the world economy will enter a recession more severe than the 2009 Global Financial Crisis, when the fall in GDP was limited to 0.1%.
The different magnitude of the two crises is linked to their dissimilar nature: while the 2009 crisis started from finance, to then reach the real economy, the current crisis stems from the paralysis of very large areas of the real economy, aimed at preventing the risk of contagion. The crisis that is developing in these months is therefore potentially more dangerous, since it is generated by the complete block of economic activities on several fronts, first of all services, in most world countries.

GDP forecast: how bad will it get?

According to the April WEO forecasts, 9 IMF member countries out of 10 of the will see a contraction in their GDP for the current year: we are therefore facing, to all intents and purposes, a global crisis. Advanced economies will suffer the most from this crisis, with an expected GDP contraction of 6.1% in 2020, while for emerging economies the fall will be limited to 1%.
The two graphs below show the expected percentage changes in GDP in 2020 for the 15 largest developed and emerging economies. The horizontal bars are ordered according to the intensity of the expected GDP contraction.

As can be seen from the graph, the IMF forecasts that, among the major developed economies, Italy will suffer the sharpest blow from the Covid crisis, with an expected GDP contraction of 9% in 2020. This forecast looks quite reasonable, considering that the country is one of the epicenters of the epidemic, and that the economy was already showing an anemic growth before Covid191. Italy is closely followed by Spain, for which a 8% contraction of is expected. But it is not just the Mediterranean: the German economy is also expected to contract by 7%, as are the United States and Japan (-5.9 and -5.2% respectively).
The crisis is not, however, sparings emerging countries: Thailand (-6.7%) and Mexico (-6.6%) are expected to be strongly penalized by the blow of the virus; Russia’s and Brazil’s GDP will shrink by more than 5%. On the contrary the two Asian economic giants, China and India, as well as Indonesia, are expected to show a lukewarn economic growth, but in any case much lower compared to their historical average.

In addition to GDP, in the current globalised economy international trade trends represent another key variable that allows to measure the intensity of growth. Several institutes have released forecasts about international trade dynamics in 2020, thus evaluating the impact of the pandemic on world trade: among them we can find the World Trade Organization, as well as the International Monetary Fund. Based on the latest IMF macroeconomic scenario, international trade forecasts available on ExportPlanning have also been recently updated.
What appears certain from the comparison of the data from the different sources is a strong contraction in international trade for the current year, as a direct consequence of the pandemic. Disagreement emerges on the extent of the fall: in the absence of certain information on the duration of the Covid-19 shock, the presence of uncertainty is high and it is necessary to formulate strong hypotheses at the basis of predictive models.

World Trade Organization
According to the WTO, the decline in world trade that will occur in 2020 will likely exceed the one occurred during the 2009 crisis. Due to the unprecedented nature of this health crisis and the uncertainty about its economic consequences, the WTO envisages two alternative scenarios: in an optimistic scenario, i.e. a sharp fall in trade and a recovery in the second half of 2020, international trade volumes are expected to contract by 12.9% in 2020, with a 21.3% rebound in 2021. In this scenario, the recovery would bring international trade close to its pre-pandemic growth trend.
On the other hand in the pessimistic scenario, which envisages a sharper initial decline and an incomplete and prolonged recovery, the contraction could reach 31.9%, with a recovery of 24% the following year. In this case the recovery would be only partial.
Despite the uncertainty of these estimates, a recovery is expected in 2021, but its intensity will depend closely on the duration of the epidemic and the effectiveness of the policy measures taken by the single countries. A significant rebound is likely if consumers see the pandemic as a temporary shock; conversely, households and businesses could postpone expenditure if the epidemic becomes a prolonged or recurring phenomenon, and therefore uncertainty becomes particularly pervasive.

International Monetary Fund
IMF forecasts in the April World Economic Outlook jointly consider trade in goods and services: their trade volumes are expected to decline by an overall 11% in 2020, to then recover 8.4 percentage points in 2021. This forecast is therefore close to the optimistic WTO scenario (which, however, does not take services into account).

ExportPlanning
World trade forecasts available in the Analytics section of ExportPlanning provide an overview at industry, sector and product level, up to 2023. Unlike WTO and IMF forecasts, in this case forecasts are not expressed in trade volumes but in currency (current dollars), so they incorporate effects related to inflation and exchange rate dynamics. 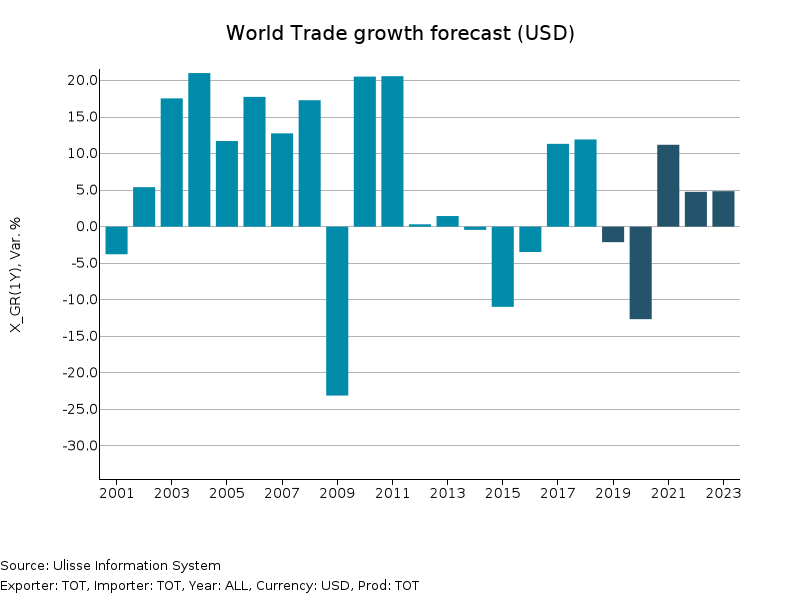 As can be seen from the graph, Exportplanning forecast is for the moment relatively cautious, assuming a contraction in international trade of 13% in dollars in 2020, and a rebound of about the same amount the following year. The choice of caution is due to the current lack of data for 2020, and the consequent need to completely base forecasts on assumptions, in an ever-changing scenario. Our forecast will therefore be updated according to trade data that will be released in the coming months.
Another reason that led us to consider a non dramatic scenario more likely is the line that is prevailing at international level of proceeding cautiously and gradually with reopenings, in order to ensure the restart of the economy, accepting a degree of controlled risk in terms of human health. While waiting for a vaccine or resolutive treatments, the identification of strategies for an effective coexistence with the virus could represent a tool to allow an economic recovery in the months to come.

1. In the October 2019 edition of the World Economic Outlook, the IMF forecast a 0.54% GDP growth rate for in Italy in 2020, one of the lowest rates among developed economies.