In Europe, the economic fallout of the Covid-19 crisis required to Member States a joint effort to support the recovery of the domestic economy. After four days of tension, due to the reluctance of some countries, on 21 July at the European Council one of the most intense negotiations in the history of the EU ended, bringing to the agreement on the Recovery Fund and the European budget 2021-2027. Close to what has been defined by many as a "historic agreement", the availability of EU Quarterly Trade datamart in ExportPlanning to Q2-2020 allows us to trace the economic picture of the European export flows. 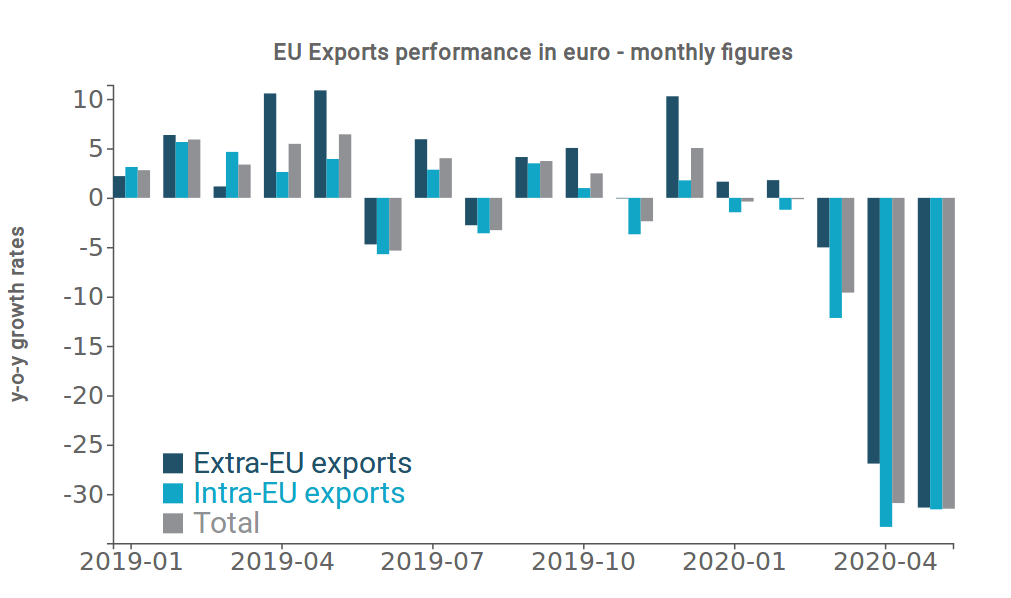 As can be seen from the graph, after a y-o-y (compared to March 2019) contraction of -9.6% in March, EU exports experienced a sharp intensification of the collapse during the months of April and May. In particular, intra-EU export flows were at their worst during the month of April, with a decrease of -33%; on the contrary, in the case of extra-EU exports, the most negative performance was recorded in May. In overall terms, the drop in European exports was close to 31% in both April and May.
The availability of these data also allows an estimate of the overall dynamics for the second quarter of the year: as shown in the graph below, the contraction that affected EU exports was more marked than the downturns recorded during the most negative phase of the 2008-2009 crisis.

For the several European countries there is a relatively heterogeneous situation due to the different timing of the spread of the epidemic in the different Member States and the consequent lockdown policies, differentiated by rigidity and duration.
Extending the analysis to the first six months of the new year, it is possible to draw a map that positions the Member States on the basis of the rate of change recorded in the first half of 2019 and that for the first half of 2020. In this way it is possible to investigate the intensity of the fall for some European areas and to point out those countries that, in terms of foreign trade, are more exposed to the recessive effects of the pandemic.

All European countries showed a significant contraction compared to the 2019 results, placing them well below the yellow bisector, which divides the declining from the accelerating countries. At the bottom right of the proposed map there are the countries that recorded the most significant contractions in the first half of the year.
With the exception of the Netherlands, these are the major European exporting countries: Germany and Italy showed a contraction close to -15% in euros compared to the same period last year. Slightly stronger declines were reported by France (-18.8%) and Spain (-18.2%). As anticipated, the Dutch result was more resilient: -8%. On the emerging economies' side, the worst performance was reported by Romania, strongly integrated into German and Italian value chains, while Hungary and Czech Republic experienced a fall of -13%. The Irish result is the only one that remains in positive territory, albeit slower than in 2019. Evidence largely attributable to the growth of exports to the US market.

The symmetrical nature of the health crisis, which involves both supply and demand sides, gives back a complex picture for European exports. The most significant contractions are reported for the main exporting countries and the emerging economies integrated through value chains. Moreover, the spread of the virus on an international scene has neutralised the slight recovery recorded by intra-EU flows, due to the worsening of sales on non-EU markets.