Change of Course in Turkey?

After 2 years, monetary policy is back on the scene to confront the threat of a new currency crisis

Yesterday the Central Bank of the Republic of Turkey surprised the markets with a "historic" decision: for the first time in two years, the monetary policy committee decided to raise its reference interest rate (1 Week Repo).
As can be seen from the graph below (source: DailyDataLab), the last rate hike in Turkey dates back to September 2018. After a period of stability, from the summer of 2019 a series of cuts took place, as the new governor Murat Uysal - aligned with President Erdogan's monetary policy preferences - took office. The nominal rate then remained stable from the spring of 2020.

The reaction of the currency

The Turkish currency showed a positive reaction to the news, in the face of a move desired as well as unexpected for financial markets. In fact, it is well known that President Erdogan's monetary policy stance does not favour high interest rates: for this reason, most analysts were not expecting an increase from a central bank acting under a certain political pressure.
In relation to this news, in the last two days the lira has strengthened by almost 1 percentage point against the dollar, after having lost more than 12% of its value compared to the greenback since the end of July (almost 30% since the beginning of the year). 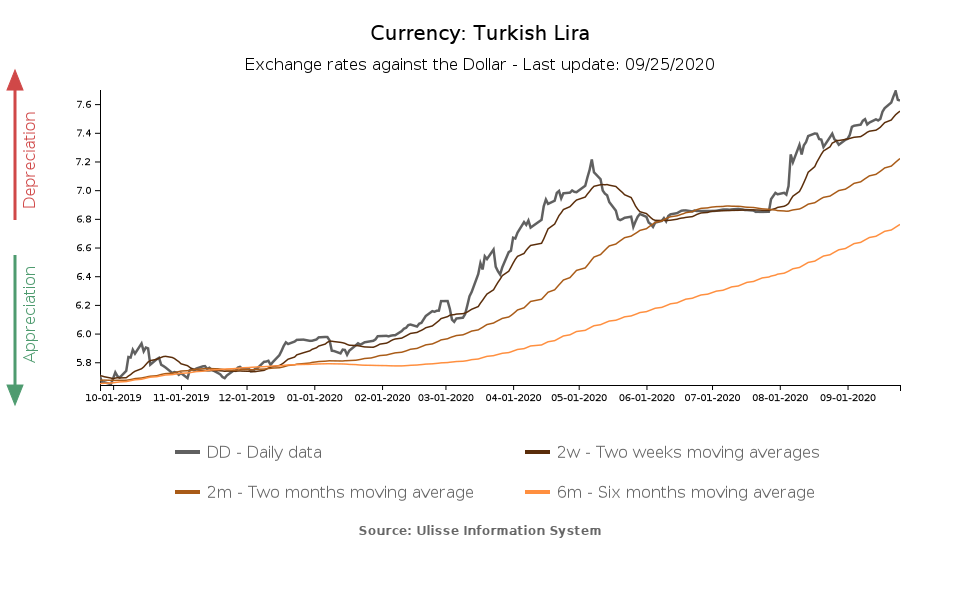 As we wrote in previous articles (you can find the latest here), the Turkish lira is a historically fragile currency that, in line with the EM currencies cluster, has been penalized by the impact of the Covid emergency. Since the beginning of the year, the currency has been characterized by a progressive weakening, while the country's currency reserves suffered a significant erosion, in line with attempts by monetary authorities to support the lira. This is evident from the stability of the exchange rate against the dollar in the graph above, which was abruptly interrupted due to an alleged shortage of resources.

In this scenario, the greatest fear expressed by the markets is a balance of payments crisis: this is among the reasons that in mid-September pushed Moody's to downgrade Turkish sovereign debt from B1 to B2, pushing it further into the junk area. The negative outlook was maintained, due to the risk that the situation could rapidly deteriorate.
At the last monetary policy committee, the threat of a currency crisis may have been more tangible than usual, so much so that the central bank resorted to a rate hike, citing as the main reasons the inflation dynamics, that was showing higher than expected growth (+11.77% YoY in August). Despite the reference rate hike, however, Turkish real rates still remain in negative territory: the path to bring the Turkish financial situation under control and to restore credibility for the Turkish central bank therefore appears to be long.

Further move in this direction has been carried out today: the Turkish Banking Regulation and Supervision Agency has relaxed restrictions for foreign investors in an attempt to limit capital flight, which has been particularly strong since the beginning of 2020, as can be seen from data on transactions in shares and Government Domestic Debt Securities by non-residents (-14 billion dollars since the beginning of the year). Thus, some timid signs of normalization emerge, but the light at the end of the tunnel still seems far away.