Focus on EM Currencies: Fiscal Uncertainty Weighs on the Real

The Brazilian currency reflects markets' worries over the state of health of public finances, with regard to a new social welfare program

In last week's currency column we gave an overview of the dynamics of three EM currencies: Russian ruble, Brazilian real and South African rand. After focusing on the case of the ruble which, among the three currencies, showed the strongest depreciation since the beginning of the summer, let us now analyze the case of the real, which in turn has been characterized by a long-term trend of weakening, although showing some upward fluctuations compared to the sharper weakening observed for the Russian currency.

As can be seen from the graph below, the real is now significantly weaker compared to its pre-Covid levels: if in 2019 the exchange rate of the Brazilian currency against the dollar fluctuated around 4 BRL per USD, today it is above 5.6, just below the record values reached in May. 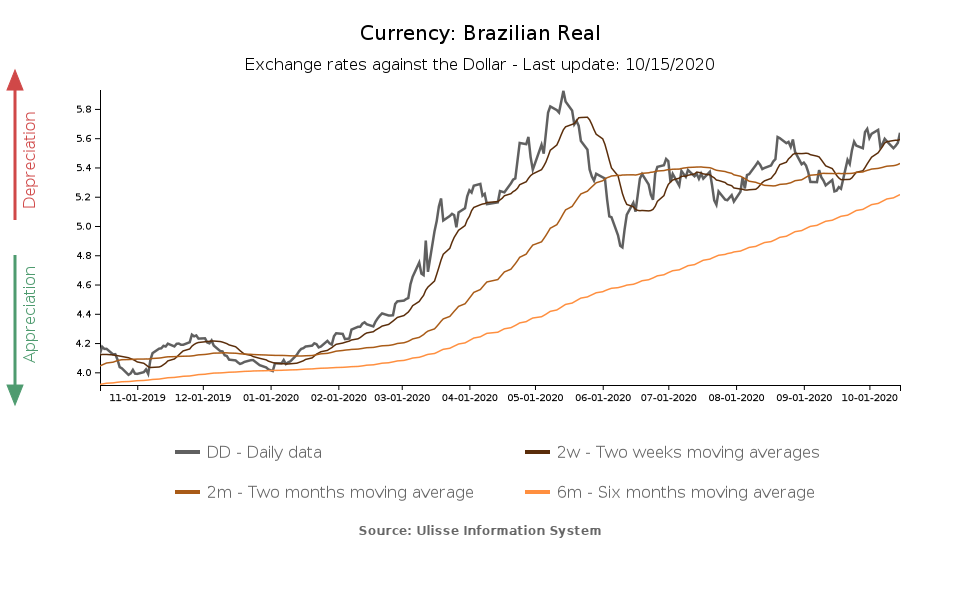 In spite of a partial recovery in terms of economic activity, the main issue that seems to be worrying investors and weighing on the real - from the beginning of the Covid crisis but mostly in the last period - is the state of health of public finances. This danger is also perceived by the Central Bank of Brazil, which at the last monetary policy meeting, held on September 16, declared that the implementation, in response to the pandemic, of fiscal measures with a significant impact on public finances may increase risk premium.

In this context, safeguarding credibility in the eyes of the financial markets is therefore essential in order not to aggravate a financial situation which already hangs in the balance. The issue that has recently been causing market fears about Brazil's economic outlook is the new social welfare program of the Bolsonaro government, called "Renda Cidada" ("Citizen Income").
The program should come into effect in 2021, constituting a substantial continuation of the extraordinary support granted to 67 million Brazilians from April, in the face of the pandemic emergency - support which, however, is expected to be phased out by the end of the year, despite a health situation that still shows no signs of normalization.
According to Reuters the program, introduced as a result of the health emergency, would have granted the current president greater popularity than he had enjoyed before the epidemic, when approval for the government was at an all-time low. It is therefore clear that, for political but also social reasons, it is essential to keep on providing support to the weakest sections of the population, in a country characterized by a large portion of informal economy, particularly exposed to the risks of the pandemic. The issue of the financing of this welfare project is, however, at the center of the political debate, and constitutes a source of concern for financial markets as well, in a context already marked by high deficits and constitutional limits to spending.

The fears of the markets for the sustainability of Brazil's public finances can be read not only from the exchange rate, but also from the dynamics of the country's long-term bond yields. As can be seen from the chart below, taken from DailyDataLab, 10-year bond yields have risen in recent months, influenced, among other factors, by the increased uncertainty on the fiscal front.