European exports closed 2020 with a decline of 10% in euros, with a rather heterogeneous situation of the main export trading partners

The recent release by Eurostat of the foreign trade statistics of European countries allows to take stock of the export recovery trend, considering the worsening of the COVID-19 contagion in the Old Continent during the last months of 2020. The stabilization of the export recovery trend, visible from the summer months, cannot in fact disregard the evolution of the epidemic in the last quarter, when Europe became once again the epicenter of the SARS-coV-2 epidemic.

The graph below shows the monthly y-o-y variation (compared with the corresponding month of the previous year)of European exports in euros, distinguishing between intra-EU and extra-EU exports. The area in blue identifies the variations estimated by ExportPlanning through ARIMA models, which allow to make short-term forecasts. 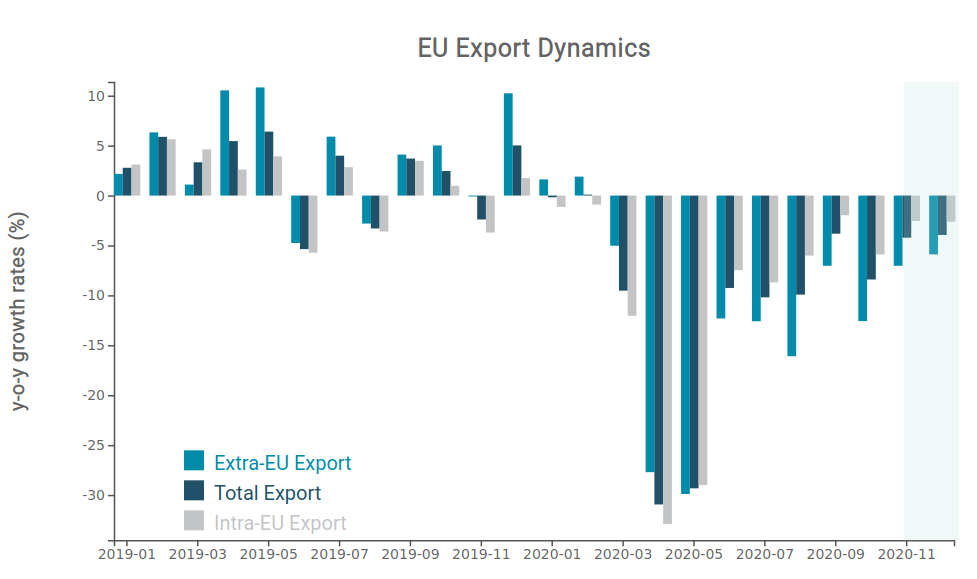 After the marked contraction recorded in the spring months, the recovery path of European exports showed its best result in September, when it was "only" 3.8% lower than the corresponding 2019 value. The worsening of the epidemiological picture visible since the autumn months seems to have weakly dampened the speed of recovery of EU exports in October, without however significantly interrupting the trend, which in fact shows signs of recovery already in November.

The result is reinforced by the Purchasing Managers' Index (PMI) for the Eurozone area, a "real time" indicator of economic activity that summarizes the outlook for industrial production levels based on companies'purchasing declarations. Despite a slight deceleration, between October and December the index steadily remained above the critical threshold of 50.

European exports in 2020: the market profile

Based on the availability of recent foreign trade information, it is therefore possible to assess the dynamics of European exports at the end of this difficult year. Overall, EU exports are estimated to have closed 2020 with a 10% decline in euros compared to 2019 values. However, the different speed of demand recovery in the main destination markets makes it clear that the situation is rather heterogeneous for the several commercial areas. The graph below positions the main European trading partners based on the rate of change recorded in 2019 (X-axis) and the change in 2020 (Y-axis). In this way, it is possible to divide the areas that were characterized by a more significant downturn and a more gradual recovery from the more resilient ones.

First, EU exports to most EU destination markets, and to Europe in general, fell in line with the overall average of -10%. Among these, however, the largest declines were to Spain for EU Europe, and to UK for non-EU Europe. On the other hand, the Swiss and Polish markets held up well. Turkey also bucked the trend, recovering in part during 2020 the weak performance visible in 2018-2019.

On the other side of the Atlantic, the EU exports fall to the main North American partners were above average, with EU exports to the US closing 2020 with a drop of almost 12%. In contrast, exports to the main Asian economies contained their losses: European sales to China were "only" 4.6% lower than last year or, in the case of South Korea, in 2020 the EU seems to have recovered from its weak performance in 2019.
Although the picture is more positive on the Asian front, there are exceptions: this is the case of the markets of Japan and India, which on the contrary recorded a marked contraction.

Given the substantial recovery in the last half of the year, analysis of EU exports shows a rather heterogeneous market situation in terms of the dynamics of the main destination areas, confirming the increasing centrality of the Asian area in the post-COVID recovery dynamics.