World trade Figures: the performance of major importers in 2020

A picture of relatively generalised declines, albeit of very different degrees for different world destination markets

It has often been emphasised that one of the most significant effects of the current crisis on international trade is the high degree of heterogeneity with which it has affected the economic sectors and several region of the world. Even in the presence of a generalised decline, the performance of markets and industries reflects on the one hand the remodelling that the epidemic has imposed on the international consumption industry and on the other the difficulties of countries in managing the epidemic curve.

Because of the varying intensity of the recovery, it is particularly informative to assess how the global main destination markets look at the end of 2020. Using the latest world trade information available in ExportPlanning - Quarterly International Trade datamart - we allow to map the overall performance of geographic areas by showing the change in imports recorded in 2020 compared to 2019.

Positioning the mouse over the circle that identifies a country, a table summarising the data relating can be viewed

The Western Europe and North America regions, which contributed most to the contraction in global trade during 2020, showed the sharpest contractions. Across the Atlantic, the United States saw its imports decline by more than USD 126 billion, followed by Mexico with a decline of close to USD 69 billion. On the European front, the deepest declines were recorded for France and UK, which saw import values fall by USD 60 billion and USD 52 billion respectively in the year just ended.
Looking eastwards, the year-on-year declines are more limited. The worst results were recorded in the United Arab Emirates in the Middle East and in India, Japan and Hong Kong in Asia.
However, there was no shortage of positive counter-trend performances, with the economies of China, Vietnam and Taiwan playing the leading role. The performance of the Turkish market is also particularly interesting, showing signs of significant recovery from the weak performance in 2019.

However, the overall 2020 figures were strongly affected by the extensive downturn in the spring months. In order to get a picture of the state of demand recovery over the quarters, it is useful to also analyse the import performance of the different regions of the world, taking the import value of the last pre-pandemic quarter to 100. 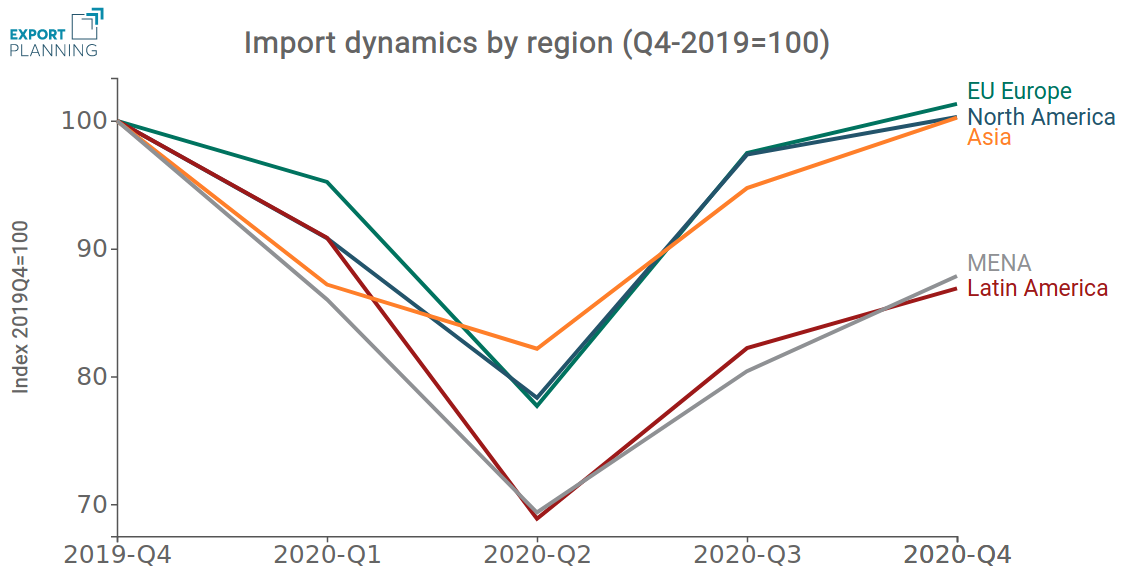 In terms of relative performance, the EU and North America declined by similar amounts in the second quarter of 2020, but recovered in the remainder of the year to close the gap to pre-pandemic levels in the final quarter. A much slower recovery can be seen in the demand dynamics of Latin American and MENA countries. Asia, on the other hand, deserves a separate discussion, where the asymmetries in terms of demand recovery in the different areas are quite large, as shown in the graph below. 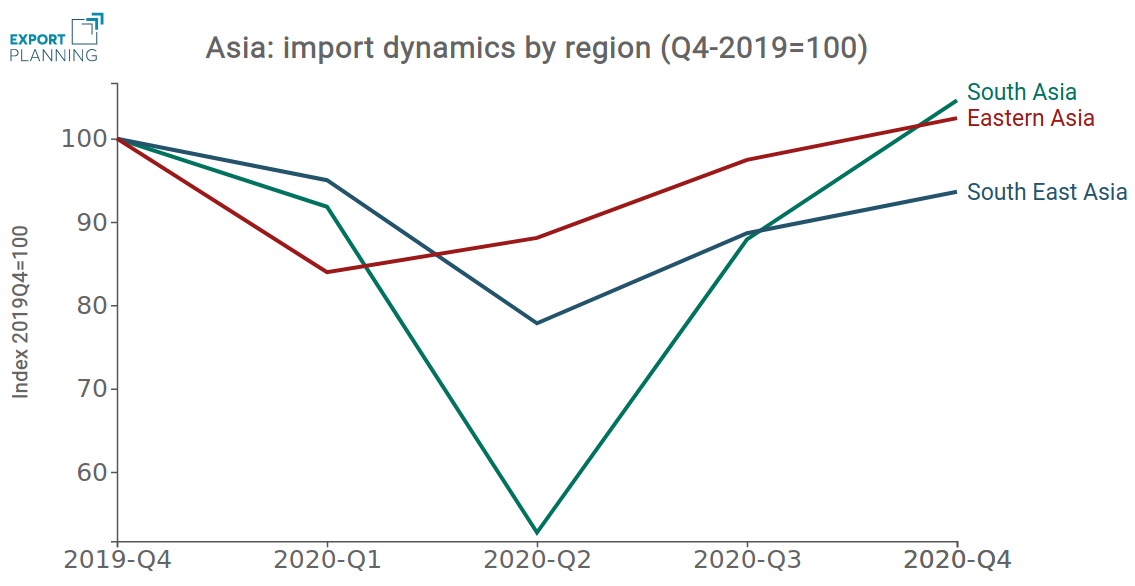 East Asia, where China's performance was particularly strong, suffered a weak decline in demand, which was concentrated mainly in the first quarter of 2020, when the epidemic broke out. South-East Asia also held up relatively well, while South Asia suffered the sharpest declines, although it showed a broad and sudden recovery.

Based on the above analysis, it is clear that the different demand areas have experienced relatively different downturns and recovery paths. A certain inhomogeneity is also found in what can be considered as one of the most resilient areas of the current international economic situation. In this context, knowledge of the changes taking place on the international scene and the state of the recovery in demand by region therefore appears to be information of high strategic value in order to be able to best adapt one's strategies to the changed competitive context.