In the agendas of world economies, the "green growth" is definitely listed as one of the key objectives for the next two decades. To achieve this goal, it is essential to set up strategic projects for sustainable development in various sectors and aspects of everyday life, such as energy, transport and food. Particularly, the need to accelerate the transition to more sustainable forms of mobility is currently at the core of governments' actions.

One important measure that allows us to tell the story of this change "in real time" is data on trade in vehicle components. After a year-over-year decline in the range of -11% recorded last year, global demand for vehicle components signals, in the first quarter of 2021, a growth of +5% compared to 2019 values, reaching $201 billion, thereby confirming the recovery on pre-pandemic levels.
In order to catch the possible implications of the green transition on trade, it is important to take a closer look at the sector, grouping products into three macro-areas: components for electric vehicles, components for traditional vehicles and other components (tires and other vehicle accessories). Specifically, we consider batteries and internal-combustion engines (and diesel) as the two most representative goods of the first and second category, and which clearly testify the differences between electric and non-electric vehicles. The following two graphs show how the geography of exporters changes depending on the sectoral specializations listed above. 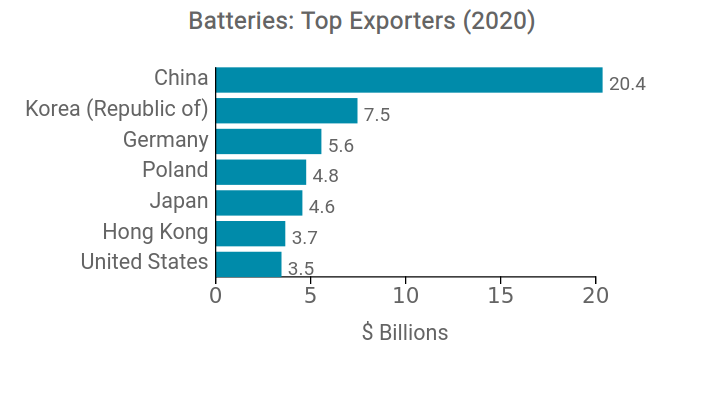 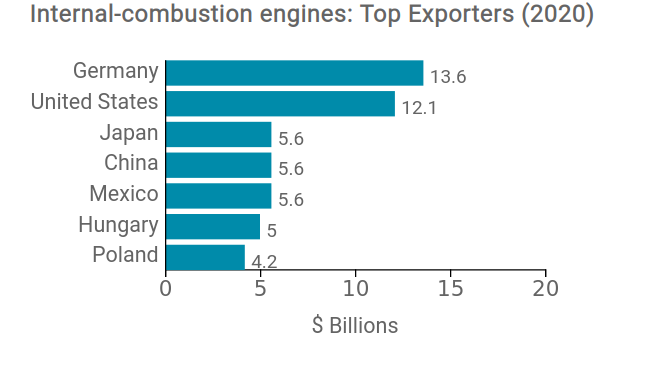 
According to 2020 data, the Asian countries (China and South Korea) dominate the ranking of the main exporters of batteries, leaving well behind the other Western countries. Also, the positioning of Germany, European leader in the production of batteries for electric vehicles, and Poland is particularly positive.
While the United States trudges to the bottom of the battery rankings, having lost market share in recent years (from 8% in 2016 to 4% last year), it rises to the podium as the second largest exporter of combustion engines, after Germany.
As the main exporter of components for "traditional" vehicles, the Western bloc is therefore more exposed to the current downturns in the sector.

In order to better understand the trade dynamics affecting the components sector, it may be particularly useful to analyze the evolution of exports over time. The graph below, which illustrates the export trends of the three categories in recent years (fixing the value of exports in the first quarter of 2017 at 100), shows that the battery trade has experienced constant growth, differently from internal combustion engines and other components, thus mirroring the increasing appetite of businesses and consumers towards electric mobility. Indeed, batteries are gradually closing the gap between them and internal combustion engines: exports have risen from $31 billion in 2011 to $67 billion in 2020, compared with $89 billion for internal combustion engines.
A further element of differentiation is brought by the pandemic crisis: whereas exports of other components and internal combustion engines encountered a sharp drop during the health emergency (overall by -13% and -16% compared to 2019 values), those of batteries recorded an increase of +20%, proving the remarkable resilience of components for electric vehicles. 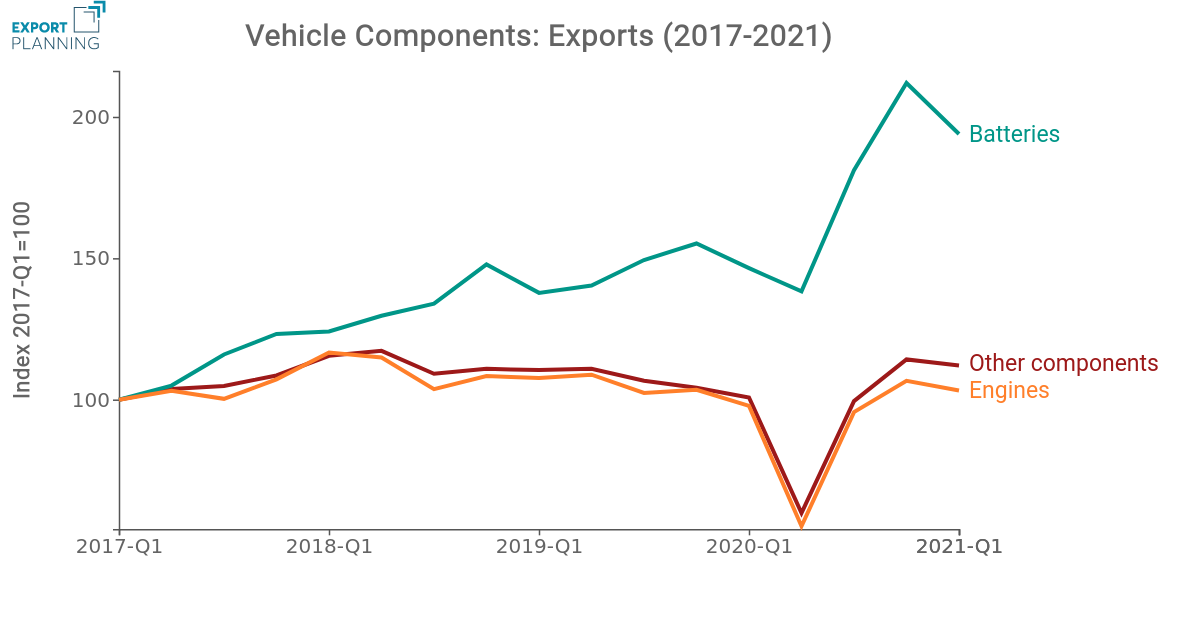 
Therefore, it might be useful to highlight the trade in this type of goods, breaking down the category into its various components.
As shown in the chart, the group related to lithium accumulators encountered the strongest year-over-year growth rates, peaking in the fourth quarter of 2020 and declining slightly in this year's first quarter (in 2021-Q1, exports of lithium accumulators stayed around 13.7 billion dollars). The second most significant category, in terms of quantity exported, is lead accumulators, whose sales have remained more or less stable over the years, from $7 billion in 2011 to $9 billion in 2020. Moreover, it is worth noting the recovery of other lead accumulators for e-cars, which reports, for the second consecutive quarter, positive growth rates (+11% in 2021-Q1). 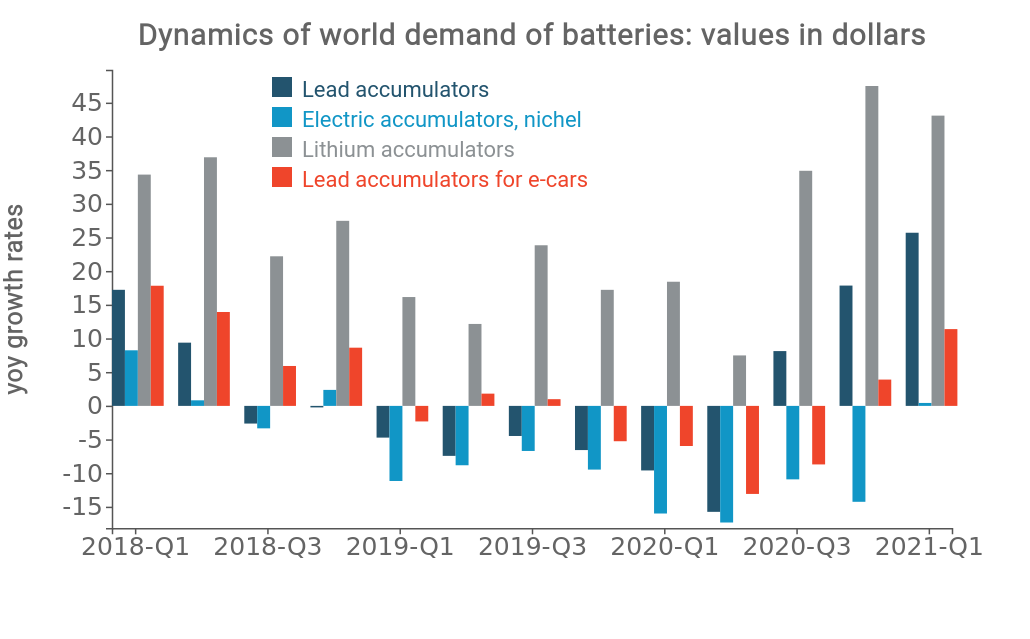 
Implementing an effective "mobility revolution" means put the entire automotive sector at the center of a production transition. To this extent, the monitoring of trade in components, both for electric vehicles and traditional vehicles, allows companies to carefully read the transition in real time.