The AUKUS signing and China's joining of CPTPP lay the basis for a shift of international trade towards Indo-Pacific area.

On the geo-economic front, one of the most relevant news in recent weeks has been the trilateral agreement signed by the United States, Great Britain, Australia (AUKUS) in order to help Australia develop and deploy nuclear-powered submarines. The signing of the agreement has prompted some discord from the governments of several countries, primarily China and France, with the latter calling the AUKUS "a stab in the back." On the one hand, France has seen the cancellation of a contract worth more than 36 billion euros for the purchase of French submarines by Australia; on the other hand, the alliance of London and Washington to arm Canberra has chilled China, worried by the prospect that the balance of power in the area may change in favor of the Indo-Pacific bloc linked to the United States.

In this context, the Chinese government's response has been swift, with the Ministry of Commerce officially declaring that Beijing is considering entering the Comprehensive and Progressive Agreement for Trans-Pacific Partnership (CPTPP).
Born from the ashes of the previous Trans-Pacific Partnership (TPP1), the CPTPP came into effect in February 2018 and currently has 11 members in place including Australia, Brunei, Canada, Chile, Japan, Malaysia, Mexico, New Zealand, Peru, Singapore and Vietnam, while at the end of the month the group will open negotiations for Britain's accession.

The availability of ExportPlanning data makes it possible to analyze and compare the dynamics of trade between CPTPP member countries with other Free Trade areas, such as RCEP2, European Union and USMCA, by putting the first quarter of 2018 as the base year, i.e. the quarter before the agreement was signed.
Although the value of trade within the CPTPP area is still limited (just over $4.2 trillion in 2019, while RCEP and the Eupropean Union exceed $9 trillion), the entry of Britain and, later, China into the trade arrangement could help boost the degree of integration that exists among several countries in the Pacific quadrant, increasing its relevance on international trade. 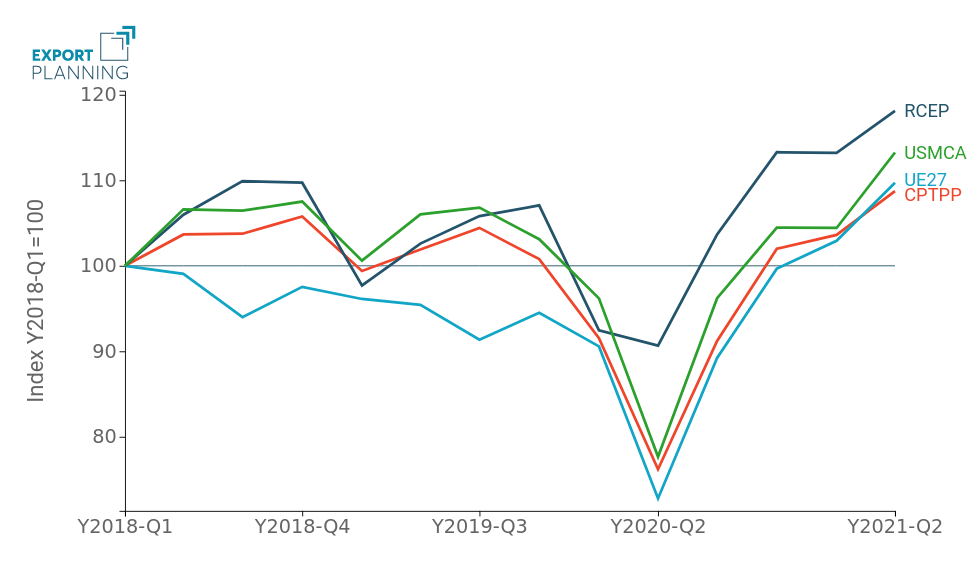 As can be seen from the chart, the performance of trade among CPTPP members is more aligned with the free trade areas of the Western Front rather than the RCEP; showing, after the fall achieved during the second quarter of the annus horribilis of the pandemic, a profile of improvement during the year. In addition, although pre-pandemic trade levels have now been surpassed, the second quarter of 2021 shows a weaker performance of the CPTPP area than the others, due to the resurgence of the virus and multiple closures that have slowed the supply chain.

Relationships with the Chinese Dragon

Looking at the trade data between China and CPTPP member countries, further considerations can be made. In the last five years, the growth trend of Chinese imports has concerned both commodities (mainly from Australia) and intermediate products, signaling an increasing integration of the value chains of the two production areas. 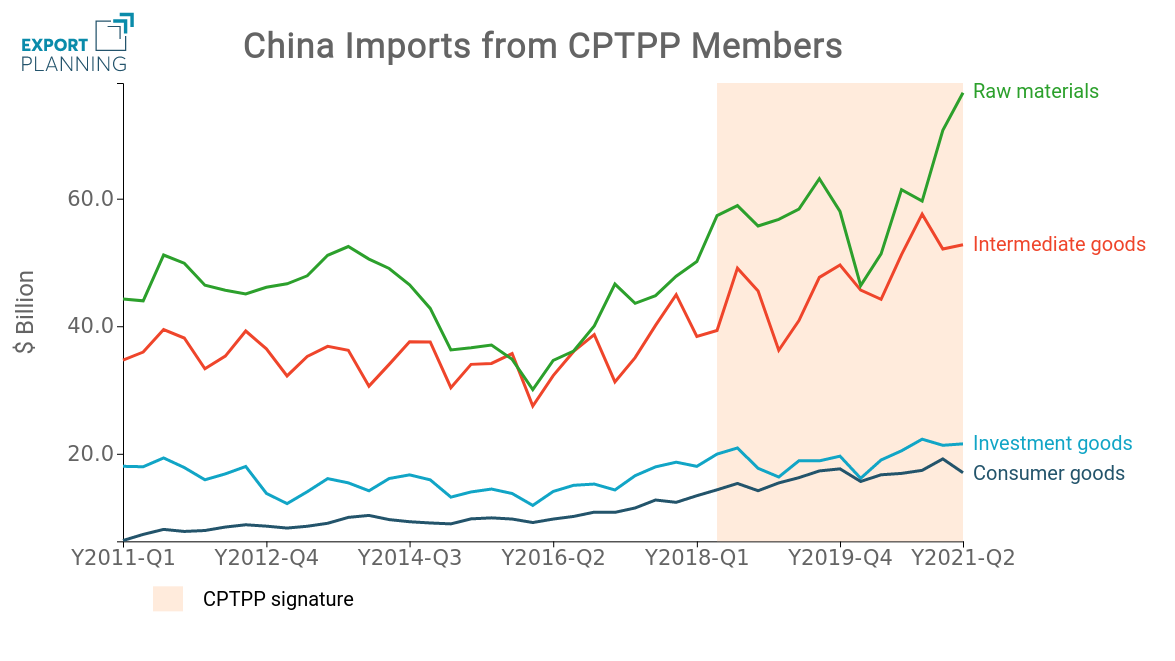 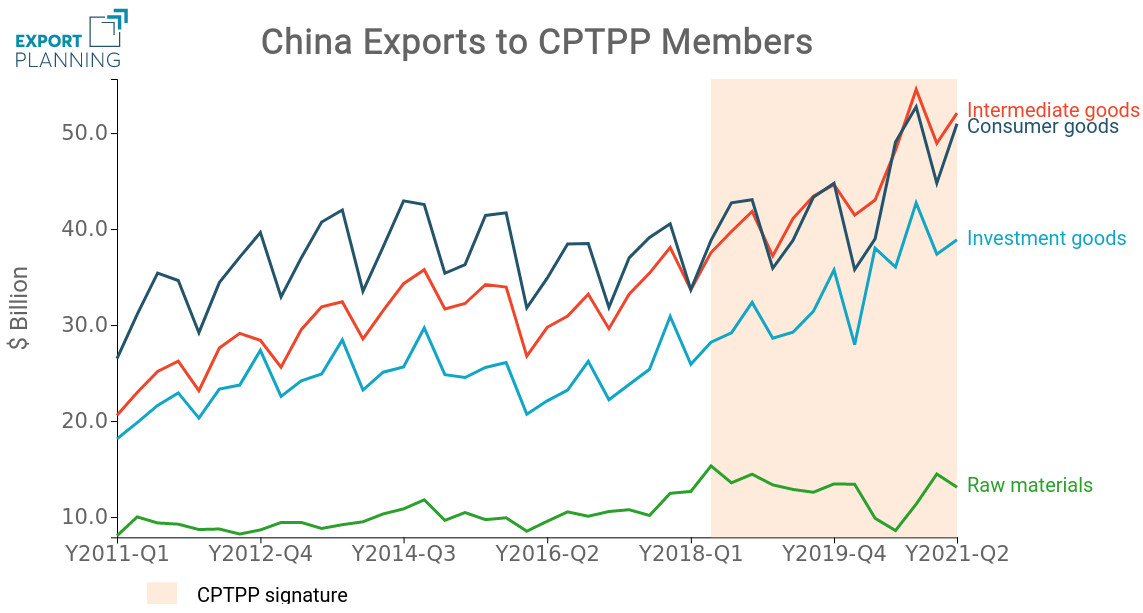 On the export side, on the contrary, the dynamic of investment and consumer goods is particularly accelerated. Despite economic relations between China and several members of the partnership are already partially consolidated, the entry of the Dragon country in the agreement would allow tit to expand its area of commercial influence towards those countries located on the opposite side of the Pacific, such as Peru, Mexico and Canada, which are historically more linked to US policy.

The competitive challenge for the European Union

From the point of view of geopolitical balances, the announcement of the AUKUS has highlighted Washington's strong strategic interest in the Pacific quadrant and the consequent lack of interest in European states. At the same time, the interest of China and Great Britain for the CPTPP poses a further challenge to the European Union, for which a reduction of its influence in an area with a strong vocation for growth such as the Indo-Pacific could be envisaged, highlighting its significant delay compared to other international players on the geopolitical chessboard. In the meantime, among the members of the Trans-Pacific Partnership, the first disagreements are already emerging, since last week Taiwan has also forwarded the application to join the agreement, provoking the wrath of the Chinese adversary.

1.The Trans-Pacific Partnership is a free trade treaty between the 11 nations of the CPTPP and the United States. Signed during the Obama administration, the goal of the agreement was to strengthen economic ties in the Pacific Rim as a counterweight to the rise of China. In 2017, the Trump administration abandoned the Trans-Pacific Partnership (TPP), and the trade treaty among the remaining members was renamed CTPP.
2.For a focus on the Regional Comprehensive Economic Partnership (RCEP) please refer to the article A Historic Deal: the Signing of the Regional Comprehensive Economic Partnership.

In Q1-2022 U.S. market demand for Machinery continued to grow at an accelerated pace [ Read all ]