Lights and Shadows on Chinese Economy

In recent weeks, the Dragon country has been at the center of media attention following the liquidity crisis of the real estate investment company Evergrande, after the failure to repay a $83 million coupon, due on September 23. With over $300 billion in debt, China Evergrande Group has been dubbed "the Lehman Brothers of Beijing" by several newspapers, sending financial markets around the world into disarray.

The Evergrande case: effect on the stock market

After being one of the protagonists of the Chinese economic boom, in recent years the company has entered a crisis following the real estate market slowdown and the stricter regulations recently imposed by the government for the sector. The closure of the Chinese economy towards foreign financial markets has determined the strong propensity of savers to invest in bricks and mortar, accentuated over time by the growth in housing prices, thus laying the foundations for the bursting of a real estate bubble.

In recent months the Chinese government has intervened to curb this speculative trend, regulating on the one hand the price of houses, on the other the excessive debt of real estate companies. The impact of the government crackdown has been devastating for Evergrande; the situation worsened when the government indicated that it would not take any rescue action against the company, breaking the too big to fail economic paradigm.

The real estate giant's financial problems reverberated on stock markets around the world.
When the news of Evergrande's imminent bankruptcy broke last Wednesday, September 20, the S&P 500 lost 1.7%, the Italian FTSE 2.6% and the German DAX 2.3% in a single day, only to recover in the following days. All other Asian and European stock exchanges also closed sharply lower.

As reported in a previous article, thanks to the rapid post-pandemic response of the Chinese market, the yuan experienced an appreciation phase between May 2020 and 2021, reaching 6.37 yuan per dollar - the strongest level over the last three years. For a few months now, the exchange rate has been stable around 6.46 CNY per USD. 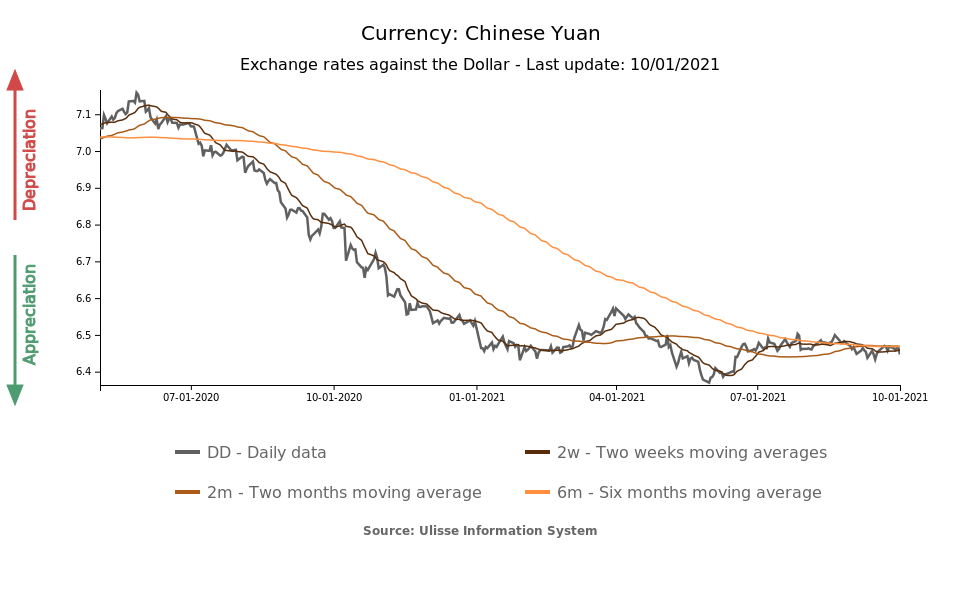 It should be pointed out that, according to the International Monetary Fund, China's exchange rate regime belongs to the group of "Other managed arrangements"; in this context, the People's Bank of China (PBOC) allows the exchange rate of its currency to rise or fall by 2% from the average official rate set each morning. Although the central bank has given the impression to move toward greater exchange rate liberalization in recent years, signals on this front appear mixed.
In November 2015, in a move to internationalize the currency, the yuan was added to the Special Drawing Rights (SdR) basket, i.e. the International Monetary Fund's unit of account. The opening of the capital account would certainly bring considerable advantages to the Dragon country, first of all the possibility of putting a brake on the seigniorage of the American adversary, i.e. the set of incomes deriving from the emission of currency, the cost of which is mainly dumped on the emerging countries that often use the dollar for transactions.

Despite this, Beijing continues to exercise strict capital controls undermining the attractiveness of the yuan as an international trading currency.
According to Reuters, Chinese regulators are currently tightening their control over the currency market, pushing banks to trade less foreign currency and in smaller ranges to curb speculation. It is likely that the PBOC's intention is to maintain the relative strength that the yuan has gained in recent months, in a way that insulates the country from rising commodity prices.

In fact, another challenge the country is facing is the energy supply crisis, partly due to China's new policy of reducing emissions by imposing increasing limits on domestic coal production. At the same time, trade relations between China and Australia (a historic import route) have recently been under pressure due to geopolitical tensions between the two countries, with China imposing duties on Australian coal. In this context, many factories have suspended or reduced production in order not to exceed limits on energy consumption.

Picking up the threads of the analysis, the economic scenario for the fourth quarter of 2021 is proving to be fraught with uncertainty for China, and downward estimates of this year's growth forecasts are beginning to circulate among economists. Given the central bank's control over the currency, in the short term no particular fluctuations in the exchange rate should be expected. Therefore, it is possible that in the coming months the exchange rate will remain stable against the dollar.