Chinese currency slows down after months of strengthening

As reported in previous articles[1], since the second half of 2020 the Chinese yuan has been experiencing a significant strengthening. Financial markets' enthusiasm was driven by a particularly accelerated economic recovery, compared to the West still struggling with the Covid-19 epidemic, expectations of more relaxed relations with the US as the Biden administration took office, and various announcements of potential vaccines. The yuan's exchange rate against the dollar had also indirectly benefited from the greenback's phase of weakness in H2-2020.
Thanks to the combined action of these factors, from late May 2020 to early January 2021, the yuan gained almost 10% against the dollar. 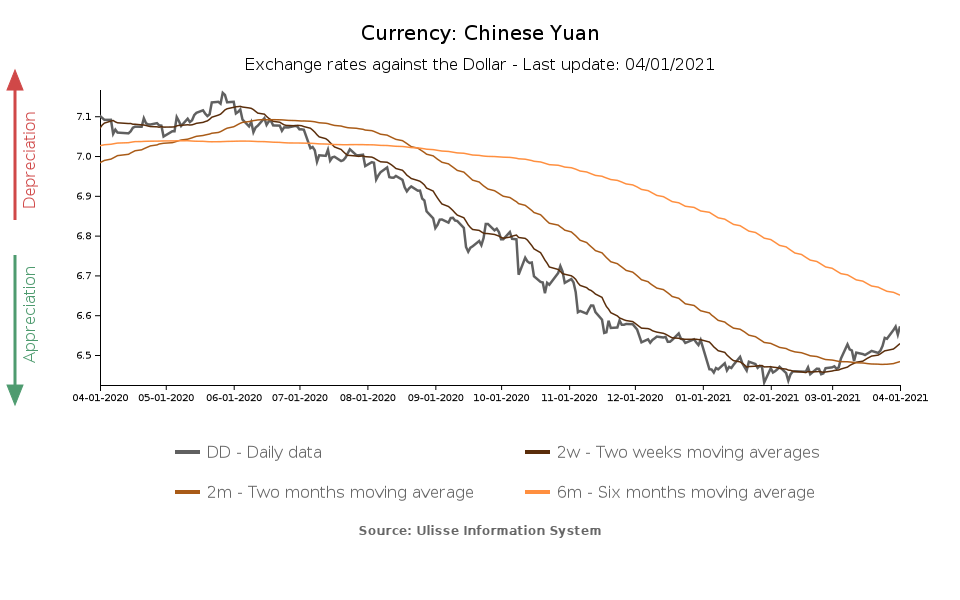 For some time now, however, this trend seems to have stopped. As can be seen from the chart, the exchange rate has been stagnating in the first two months of the new year, to then enter a phase of weakening since March. In the first three months of 2021, the yuan lost 1.7% of its value against the dollar. Which factors drove this turnaround?

A key element to mention is investors' fears of a reduction in fiscal and monetary stimulus. While Covid-related economic support measures began earlier in China than in the West, due to the different timing of the pandemic, similarly the theme of policy normalization is already beginning to emerge in the East, while Europe and the US are still dealing with expansionary measures.
Chinese policymakers therefore seem intent on starting a gradual reduction of the stimulus, also in order to avoid the creation of imbalances. The dynamics of the Chinese economy now actually seems to allow to look towards normalization: the country's GDP in Q4-2020 returned to pre-pandemic growth rates, thanks to the recovery of industry and exports, and the effective containment of the pandemic.

Dollar strength. Just as the yuan was indirectly supported by the dollar's weakness in the previous months, it now seems to be penalized by the greenback's opposite trend. Since the beginning of the year, the dollar has in fact moved from 1.23 to 1.17 against the euro, due to the action of several factors:

As a result, the gap between US and Chinese bond yields, which had opened last year and caused increased capital flows to Beijing, is now narrowing.

Political elements are also to be considered in the analysis of the yuan exchange rate, since they have recently caused fluctuations in relation to increased perceived risk.
In late March, the United States, European Union, Canada and the United Kingdom imposed sanctions against Chinese officials for human rights violations against the Uighur minority in Xinjiang province. China responded to these sanctions by sanctioning Western individuals and institutions.
The first high-level US-China meeting of the Biden era also took place in the second half of March and was characterized by some tension between the two sides; this signals that the start of the new US administration has not brought about the relaxation of US-China relations that markets had expected, with the departure from the scene of former President Trump.