One of the implicit roles that financial markets are currently playing is also the monitoring of countries' institutional quality. The many cases of economic crises due to a deterioration in the quality of institutions (Venezuela, just to name one among many) and, conversely, successes also based on institutional quality (New Zealand, for example) have prompted financial markets to closely monitor the evolution of the health of the institutions of different countries.

In recent days, the markets' alarm bell rang for Myanmar, whose exchange rate has approached the historically high threshold of 2000 kyat per dollar, depreciating close to 20% in October alone. For 2021 as a whole, the kyat's depreciation exceeded 50%, despite the Central Bank of Myanmar's attempt to bind the currency within a +/- 0.8% fluctuation range against the dollar - a move later abandoned due to mounting exchange rate pressure1. 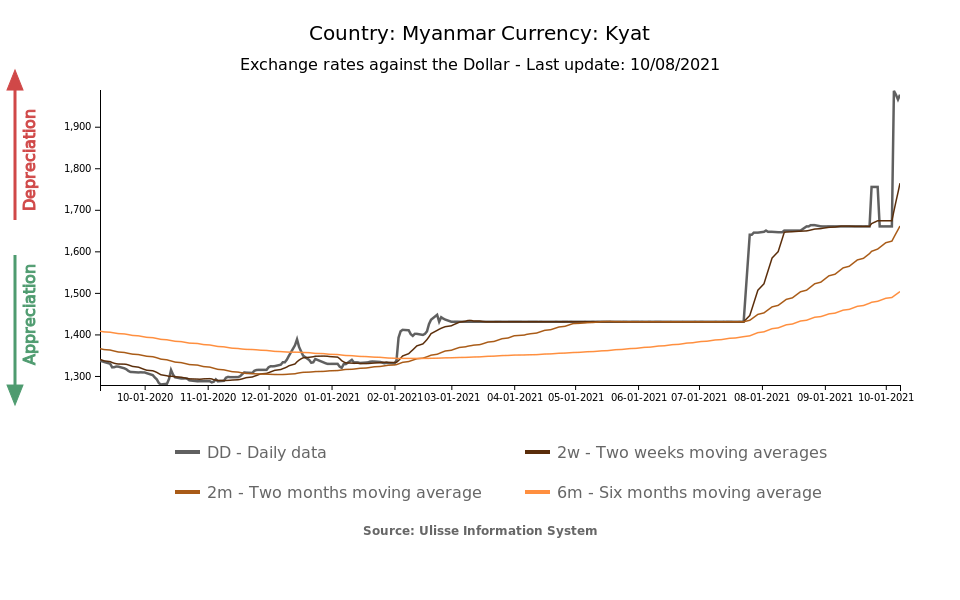 The history of Myanmar

Myanmar belongs to the Asian group of the Least Developed Countries (LDC). Although it has many potentialities, in the last 20 years the country has not been able to benefit, like its neighbors, from the globalization of the world economy and the strong growth that marked the Far East. Among the main points of weakness, we can find on the first line the poor quality of institutions.

A former British colony, Myanmar became independent in 1948. After a few years of attempts for democracy, the country fell into the darkness of a military dictatorship in 1962. The possible process of democratization began only in 2011, with the launch of a "disciplined democracy", with broad powers remaining in the hands of the military. The exit from the regime occurred only with the parliamentary elections held in 2015 and with the election, the following year, of Aung San Suu Kyi to the leadership of the country.
On February 1, 2021, the military returned to power through a coup, disrupting the ongoing democratization process. Almost all of the leading members of the National League for Democracy, a party that had triumphed in the last round of elections in 2020, were arrested. Since then, street protests have begun, to which the regime has responded with a crackdown.

The political and economic crisis

In a situation already delicate due to the start of the pandemic, the political shock thus constituted a further element of crisis, bringing with it an inevitable collapse of the economy.
The following graph shows the various forecasts of GDP growth in 2021 in Myanmar, calculated by the International Monetary Fund in recent years. It is clear how the assessment of the country's economic situation has radically changed between the forecast scenario formulated in October 2020 and the one formulated after the coup, in April 2021. Specifically, the most recent estimates predict a collapse of the gross domestic product close to 9% in the current year. 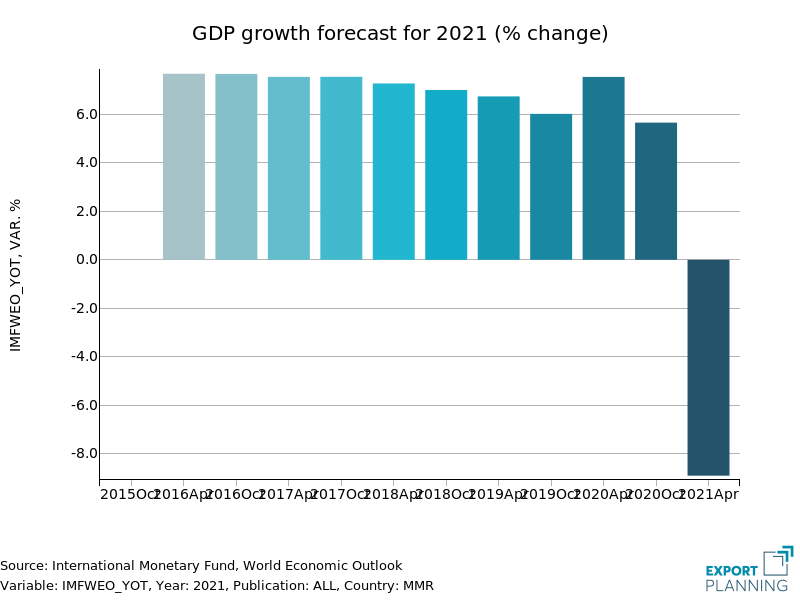 World Banks' forecasts also show a negative scenario: the institute predicts a severe impact of the current situation on the country's economy, ranging from job losses to reduced incomes and increased poverty. The risk outlined for the long term is to jeopardize the progress Myanmar has embraced over the past decade.

With the events of this year, the country therefore rallies among the most representative cases of how economic development can only go hand in hand with the improvement of institutions, and how changes in exchange rate dynamics can clearly reflect variations in the degree of market confidence.

1. As reported by the International Monetary Fund, the country's exchange rate is not freely floating, but rather falls under the group of "other managed arrangements". The central bank manages the kyat's exchange rate through a reference rate.