Are we heading for a structural increase in inflation? An analysis of European import data

In the first few months of 2021, prices of raw materials increased significantly. This dynamics was driven by the intense recovery marked by the manufacturing sector in world's leading economies, and by restrictions on the supply side, which triggered strong tensions on prices. This led several analysts to describe this phase as the beginning of a supercycle in commodity prices, similar to that occurred at the beginning of this century (2004-2008).
The following graph illustrates the increase recorded during the most recent months, reflecting in particular the generalised and intense price increases for metals (ferrous and non-ferrous), energy and plastics.

The recent rise in commodity prices has intensified the international debate on the possible future evolution of inflation in the medium term, in Europe as well as in other parts of the world. The increase in the cost of raw materials has in fact translated into an increase in input costs, pushing up production prices in the manufacturing sector. This phenomenon, within an economic framework of general recovery strongly supported by expansionary fiscal policies, has engendered significant fears about a possible inflation comeback.
In fact, the most recent months have seen a rise in inflation. This increase particularly affected the United States, also due to the fiscal stimulus package approved by the Biden administration, but also the EU itself (Fig. 2). 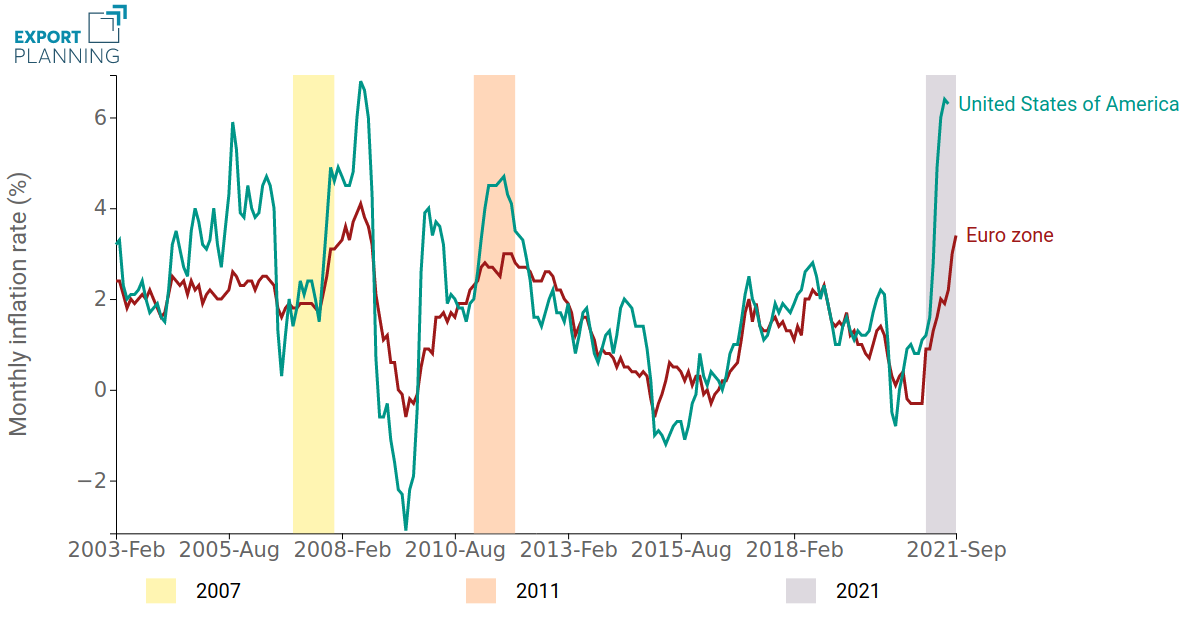 Currently, the international debate is focusing on whether this inflationary momentum will be temporary or lasting. An indicator of the increased international interest in the subject is, for example, the amount of google searches for the word "inflation".

From the results obtained, a strong growth in research on the subject is evident, as already occurred in 2007, thereby testifying the similarities of the two periods.
However, according to many commentators, as well as the majority of those working in the world of international finance, the current spike in inflation is largely attributed to several factors that are likely to dissipate in the medium term.

Are we heading towards a structural increase in inflation?

In order to bring an analytical contribution to this question, we analyzed the variation of the average unit values of European imports in the first three quarters of 2021, compared with the same period of 2020, together with the last two historical cycles in which there was an increase in the commodity price index (2004-2007 and 2009-2011). The analysis takes into account more than 8000 Combined Nomenclature codes. The aggregation of this "microeconomic" data allows us to consider the change in average unit values as a good proxy for the change in prices over a relatively short period of time.

From the graphs shown above, it is possible to note the similarities, in terms of growth intensity, that the current increases have, on the one hand, with the cycle that began in 2004 and, on the other, with the one that began following the Great Recession in 2009 and ended in 2011 (Fig. 1).
Both cycles turned out to be particularly relevant for both commodity and inflationary rises. This led us to compare the current dynamics of the average unit values of European imports of consumer goods and raw materials with the historical ones recorded in the above mentioned, in order to highlight similarities and differences.
The initial stages of all the periods examined correspond to the minimum stages from which the rise in commodity prices began, so they are suitable for capturing the intensity of price variation. 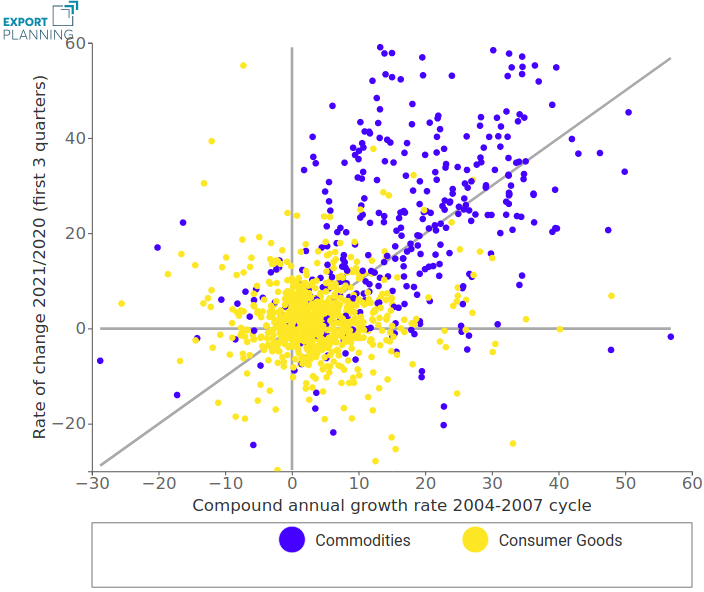 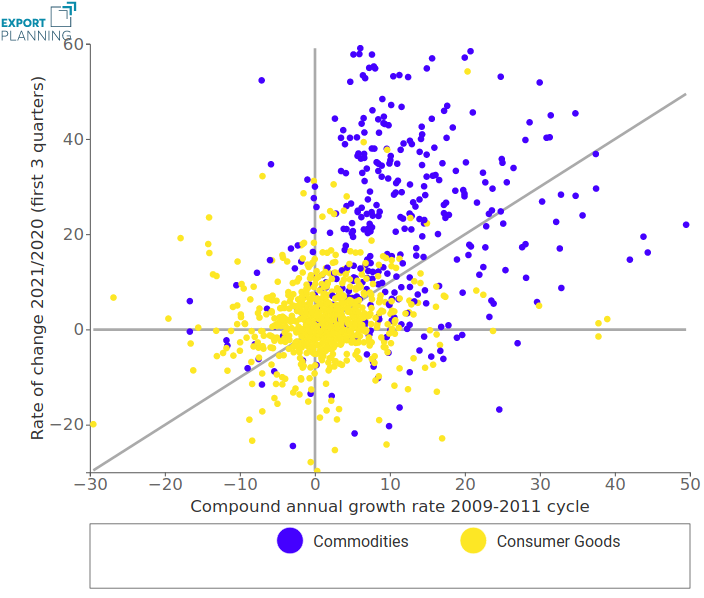 It is evident that, in both graphs, most of the points associated with the change in commodity prices are located in the first quadrant, reflecting the bullish phase of prices in both cycles. In particular, the majority of commodities are located above the bisector of the first quadrant, indicating that commodity prices are experiencing a greater change in this cycle than in the previous cycles considered.
Generally speaking, although the price dynamics today are more bullish, the 2004-2007 phase would appear to be more comparable to the current one in terms of intensity of the growth recorded. However, the element that most differentiates it from today is the fact that in 2004-2007 the positive shock was initially driven by foodstuffs, metals and plastics and only from 2007 by energy. On the contrary, today the increases are widespread, and start first of all from the energy categories, followed by metals (ferrous and non-ferrous) and plastics.
As expected, in all the periods analyzed, the growth in prices of consumer goods has always been characterized by "lower intensity". Even for these type of products, however, there is a greater upward trend in the most recent period than in past cycles. For the moment, the most significant increases concern goods more linked to the need to face the pandemic emergency, first and foremost pharmaceuticals and medical-surgical aids. Some categories of equipment and electronic devices also registered increases. However, it should be emphasized that, in order to speak of structural inflation and consequent loss of purchasing power by families, it is necessary to experience a generalized and lasting increase in the prices of products belonging to a representative consumer basket.

The analysis conducted clearly highlights the uniqueness of the economic situation in which we find ourselves, which indeed does not present perfect peculiarities with the previous historical phases. A first conclusion is that prices of manufactured goods for consumption are showing, in this phase, a greater upward trend than that previously recorded. However, in order to channel a structural increase in inflation, it is necessary that the expectations of economic operators move in the same direction. The thrust of the expectations engine depends crucially on central banks' behavior and therefore this will be the most important barrier in the near future.