The decision to suspend all retaliatory tariffs on EU exports is boosting food & beverage: +8% in the first 9 months of 2021

The latest ExportPlanning data on EU foreign trade, accessible through the Conjucture EU Countries, allow us to present a brief review of trade recovery in the aftermath of Covid-19.

Among the sectors which showed greater resilience across 2020 the agri-food sector is certainly included. After the y-o-y drop of -6% encountered over the spring months, values returned in line with those of 2019 already in the third quarter, closing the year with an excellent result (+1.20%).
Exports have shown positive signs in 2021 as well. In particular, following the robust positive variation recorded in the second quarter, justified by the statistical "base effect", there was a growth of +7% in the third quarter of the year, as can be seen in the graph below.

In the chart below, the main destination markets for European are positioned on the rate of change relative to the first nine months of 2021 (y-axis) and the overall rate of change for 2020, both measured against 2019. This makes it possible to highlight those countries that, after experiencing significant growth in imports from the EU even in the pandemic year, continue to show substantial growth (top right), and those that, on the other hand, have not been resilient in 2020 but have fully recovered to pre-crisis levels (left side of the graph)

Finally, the incidence of North America among the main non-EU import areas is increasing. In addition to the performance of Canada (+13.6%), that of the United States is particularly remarkable: American purchases of agri-food products from Europe grew by 8% to 14.2 billion euros in the first nine months of 2021 (compared to the same period in 2019).

A contribution to the growth of U.S. imports from the EU is the increase in sales of alcoholic beverages (+6% between January-September), which since June 2021 have resumed growth following the decision taken by the United States and the European Union to suspend for five years the duties on products involved in the trade dispute between the two sides of the Atlantic.
As already documented in a previous article, the alcohol sector is one of the sectors in which the U.S. tariff strategy has been more differentiated for Member States. In the case of still wines, the products of French (and Spanish) origin have been affected; as a result they have experienced a decrease in their market share in the United States; at the same time, Italian wines have not been subject to tariffs, thus reinforcing the competitive positioning. Although the suspension of duties has significantly contributed to the current recovery of French wine exports, this has not closed the gap with Italy yet, which seems to keep more or less unchanged its export share in the US market.
The same is not true for sparkling wines; although tariffs have directly affected champagne, France has not seen any significant reduction of its leadership in the United States. 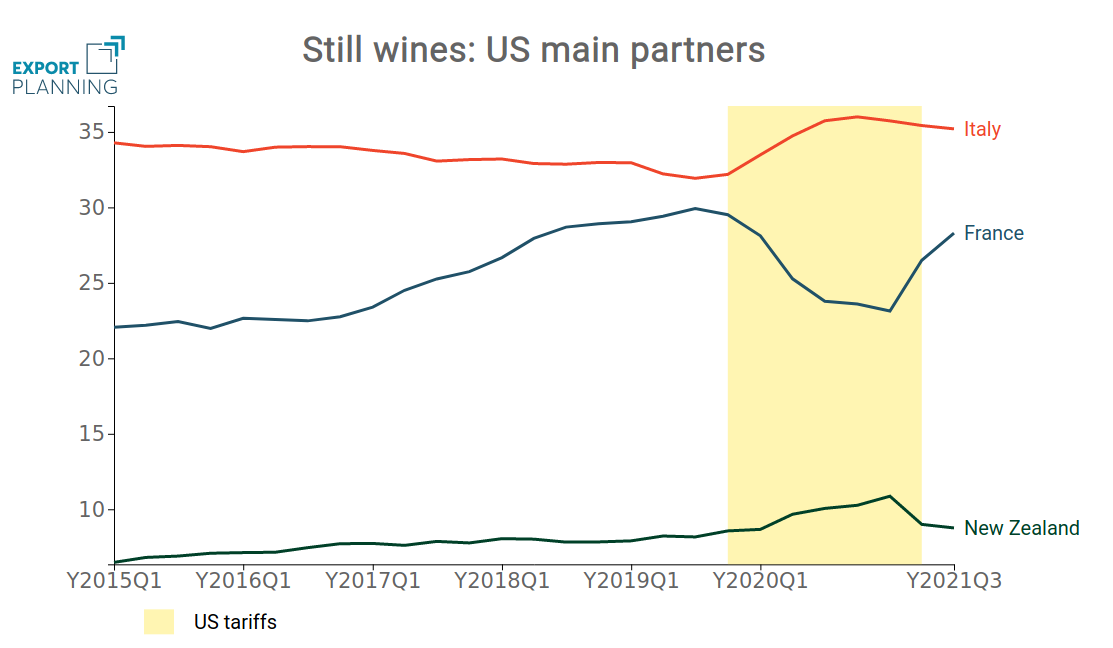 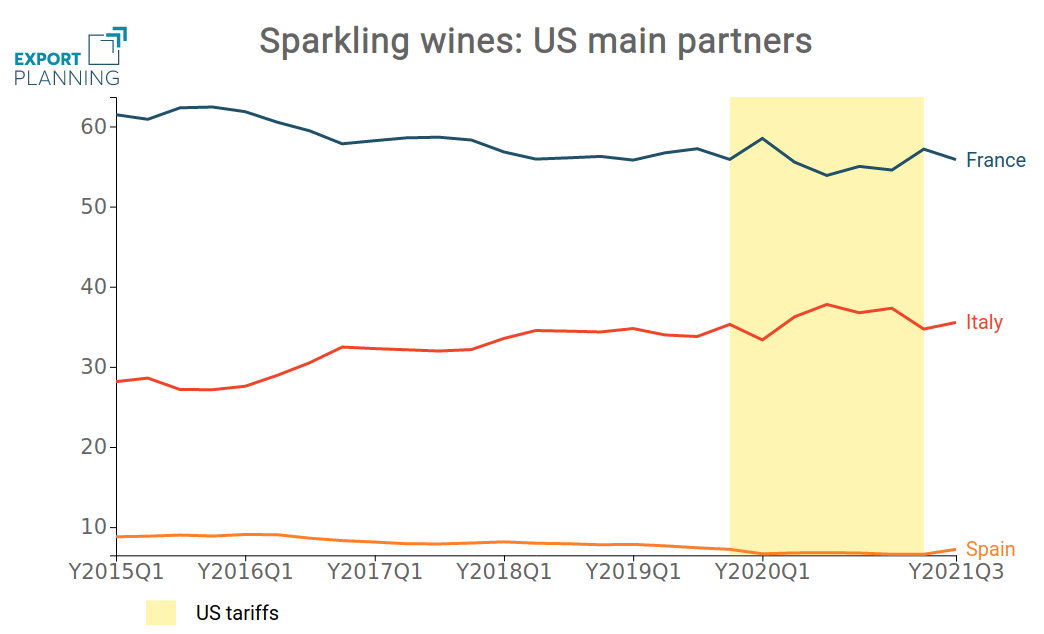 The suspension of trade tariffs has put food shipments across the Atlantic back on track. In the American market, the first destination for EU food products, exports from the Twenty-Seven have achieved a result that is contributing significantly to the overall performance of the sector in 2021.
The relaxation in trade relations between the two blocs could therefore positively affect the competitive positioning of EU countries in international markets amid post-pandemic recovery.