How have the competitive balances among European agribusiness exporters changed in the 18 months of US-EU tariffs?

One of the most relevant news of the last few days is certainly the long-awaited suspension of duties on exports from the European Union and the United States, imposed as part of the Airbus and Boeing legal dispute. As we have already reported[1], on the basis of what was sanctioned by the WTO, the United States had imposed additional tariffs of 25% on a list of products made in the EU - list revised several times through the mechanism of carousel retaliation[2] - for a total amount of 7.5 billion $. One year later, due to a legal case parallel to the first one, the WTO had authorized also the European Union to introduce tariff measures for a total of $4 billion (€3.4 billion) on products of American origin.

The US and the EU have agreed to a four-month suspension in order to resolve the dispute through the resumption of the dialogue.

The news of the reopening of the transatlantic dialogue has been welcomed by international operators. Tariffs introduced by Trump administration included a double punitive mechanism for European exporters. On one hand, the tariff action unevenly affected EU products with a differentiated strategy among the Member States. On the other hand, the periodic review of the list (which could include both a change of tariff rate and a revision of goods subject to duties) generated deep uncertainty for companies active on the US market, maximizing the negative effects of US tariffs. After about 18 months from the entry into force of tariffs on EU products, what effects can we observe on the European competitive balance in the US market?

The agri-food sector is undoubtedly the one in which the American tariff strategy has been widely differentiated among European member states. It provided for a more or less penalizing treatment in relation to the production specialization and the membership in the Airbus consortium (which includes Germany, France, United Kingdom and Spain). Below is a representative list of affected products.

For the cheese industry, US tariffs affected almost 100% of German, Spanish, English and 70% of Italian exports. French exports were completely exempt.
The economies of the Old Continent which held a relatively contained market share for the sector, such as Germany and the United Kingdom, experienced a further downsizing of their competitive positioning. Also the Spanish competitor experienced a similar phenomenon, although it represented a more relevant US trading partner. Instead, France and Switzerland experienced growth. Particularly interesting is the Italian case, whose market leadership has remained substantially unchanged, as shown in the chart below. 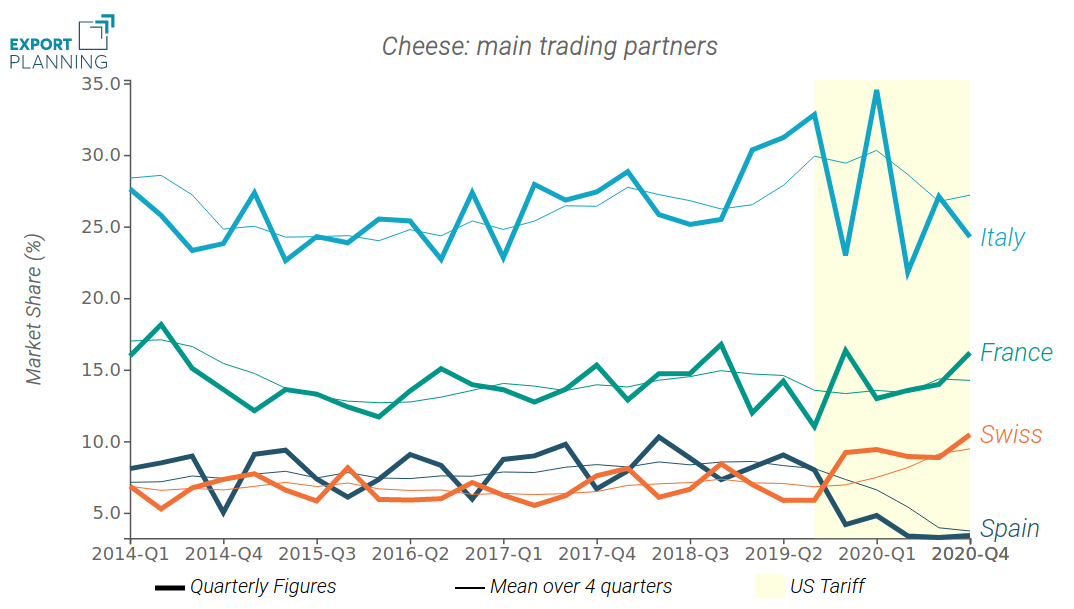 For wines, the tariff measure affected only the exports of France and Spain. French exporters have in fact experienced a severe loss of export quota on the American market, interrupting the growing trend of last years. Italy was the first to benefit, as it experienced a rapid improvement in its competitive positioning after years of substantial stability. Tariff imposition has also improved the competitive positioning of other non-EU trading partners, such as New Zealand and Austrialia. 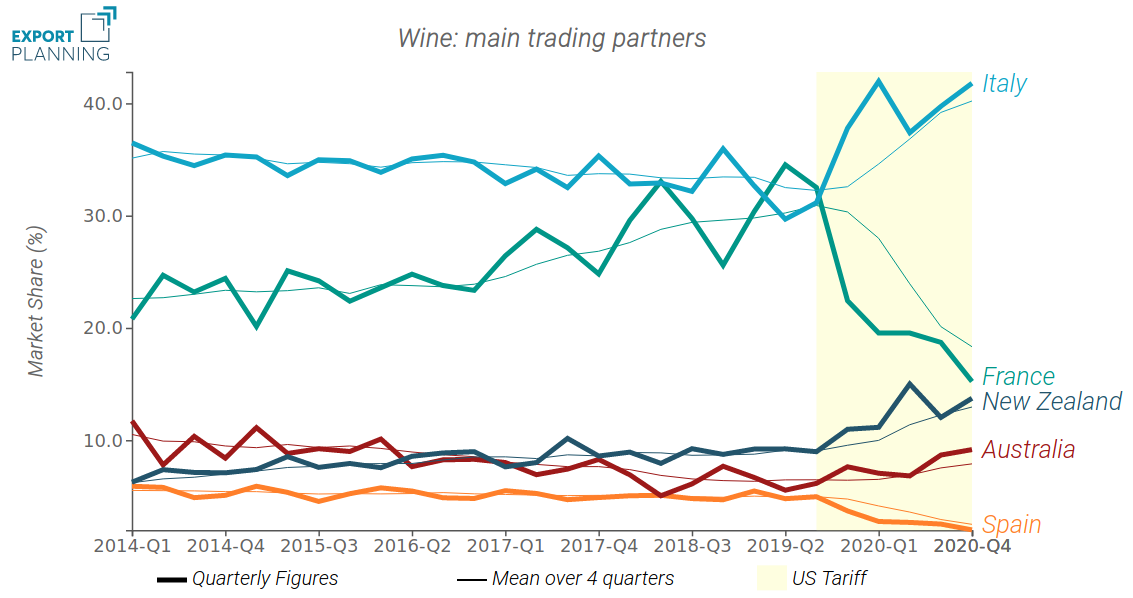 Moreover, the duties affected 100% olive oil exports of Spain and Germany, but left the Italian ones exempt. Unlike the wines, it was not Italy that benefited from the Spanish repositioning, but mainly competitors positioned in lower price brackets, such as Tunisia and Portugal. 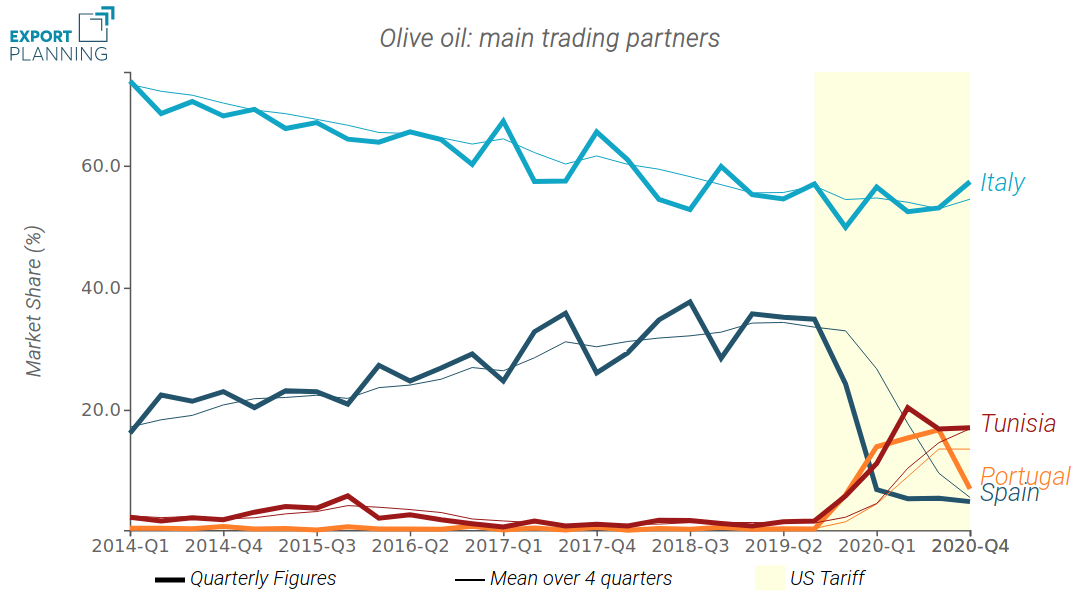 In the 18 months in which it has been in force, the punitive strategy of the Trump administration has certainly modified the existing competitive balances in the US market. For the agri-food sector, the change occurred for wines and olive oil testify this phenomenon: as costs increased, US market moved towards goods considered as substitutes. Particularly interesting is the case of Italian cheeses exports, whose market share does not seem to have lost ground. In light of the tariff suspension, the next few months will be fundamental to understand how consolidated can be considered the phenomena just described.
Beyond the mere tariff aspects, it must however be underlined how the news of the suspension of Airbus duties has launched a positive signal for the next development of transatlantic relations. The resumption of dialogue and a strengthening of Washington-Brussels relations are in fact increasingly desirable actions in front of a possible new international geo-economic configuration.

[1] For an in-depth discussion of this topic, see the following articles: U.S. Tariffs On EU Products and EU competitive balance , Potential for Italian wine in the US after Airbus tariff, The Airbus-Boeing Saga and the Transatlantic Dispute.

[2] In the last year and a half, there have been two tariff revisions (in February and August 2020), but these have been limited to increasing the rate on aviation and have partially expanded the list of affected products for Germany and France. In fact, the changes introduced can be considered marginal, and the analysis conducted here looked at goods that have been subject to duties continuously over the past 18 months.