Are difficulties in global chains leading to regionalization of trade?

Many observers have recently announced or speculated about the end of the so-called "era of globalization". However, rather than near its end, globalization seems to be nearing a new configuration.
What the profile of the latter may be in the near future is indeed one of the most debated topics of the recent period and is the focus of international attention.
Not surprisingly, it was one of the central themes of the World Economic Forum in Davos, held just a few weeks ago: Is there a future for globalization? Business leaders discuss at Davos 2022.

So will the future be one of deglobalization, reorganization of economic activity and reshoring?
This question is relevant in many ways. First of all, because globalization has been a strong driver for the development of low labor cost countries (China first and foremost), creating conditions for a growth in world demand for "variety of goods," and thus for typical "Made in Italy" sectors. It is, however, also crucial for machinery sectors, in fact, the localization among different countries of facility drives the territorial breakdown of machinery demand.

Certainly the pandemic, the inefficiencies recorded along supply chains and the growing uncertainty of the international environment have clearly highlighted the risks and vulnerabilities of the current configuration of global value chains, which, in the presence of sudden shocks, threaten the resilience of the current globalization model, forcing companies to rethink their supply chains and localization decisions.
However, rather than being the driver of change, the health emergency seems to have accelerated processes already underway in recent years and consequent to new policies on foreign trade, especially by the U.S. administration.

At the turn of the last century and the beginning of the new one, the reduction of transportation costs, the development of information and communications technology (ICT), the reduction of tariff barriers and the gradual liberalization of financial flows drove and supported a highly integrated manufacturing organization on a global scale.
Indeed, GFCs are based on the specialization and fragmentation of the different stages of value creation, devolving lower-value-added stages to countries with low labor costs, benefiting from the related cost advantages.
In fact, between 1995 and 2008, world trade in intermediate goods, which are precisely those goods most involved in GFC[1], experienced particularly strong growth in quantity, becoming a driver of world trade dynamics. The following graph highlights the dynamics of world trade in intermediate goods, raw materials and consumer goods, which have been related to the industrial production index of the manufacturing sector in order to identify which category is the main driver of the global economy.

We can immediately see that until the great recession, growth in all categories of goods was extremely strong, led in particular by intermediate goods and consumer goods. The 2008 crisis, however, was the first "shock" that highlighted the risks of the strong international integration of global value chains: after that date, in fact, growth in this cluster of goods essentially came to a halt, remaining linear over the past decade.

At the same time, increased international riskiness has led to the emergence of new modes of outsourcing, such as "near-shoring" or "regionalization". This mode of outsourcing involves the transfer of some business processes to the same or a "neighboring" country in order to shorten procurement time, optimize logistics costs and mitigate the risk of highly fragmented production chains.
However, measuring this phenomenon is not easy. In the first instance, it is important to segment trade flows by stage of country evolution. In fact, in the present analysis, only imports of developed countries (with high labor costs) from less developed countries (with low labor costs) were considered. This is because it is precisely the former that have a competitive advantage in going to produce in countries where there is an abundance of cheap labor. In addition, to identify trade flows between neighboring countries or otherwise within the same economic region, we considered membership in free trade areas as a proxy in this analysis. Specifically, the three main macro-areas (NAFTA, Europe, Asia) were considered and trade with countries within the same area (Intra-Area) and outside (Extra-Area) was compared. Trends over the years in these categories help us better understand the economic dynamics at work globally, and whether and how regionalization may gradually become the preferred mode of outsourcing for corporate strategies. 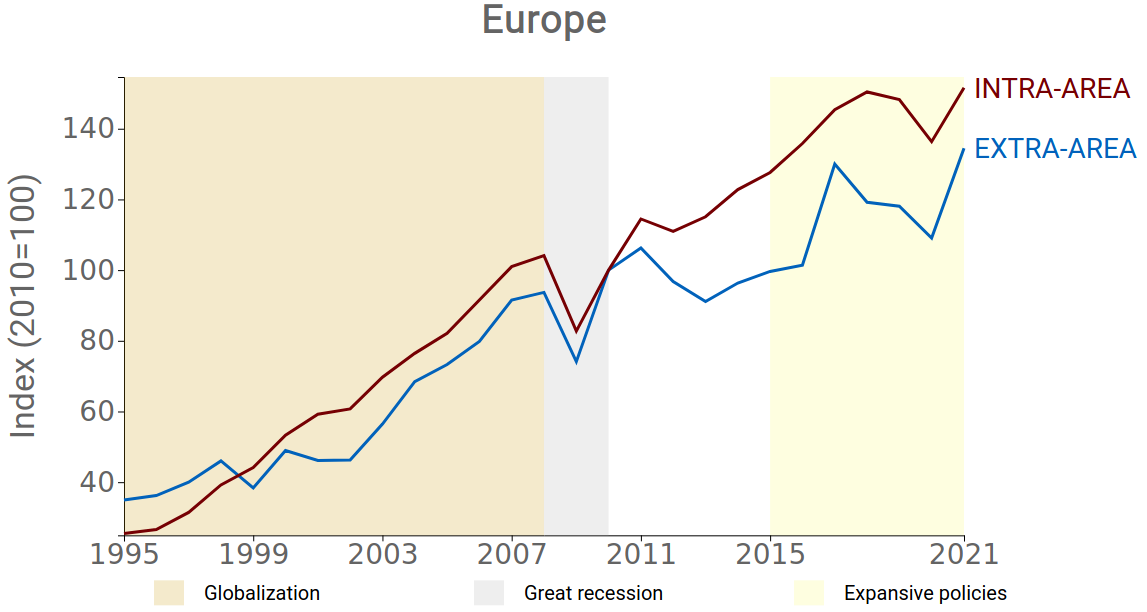 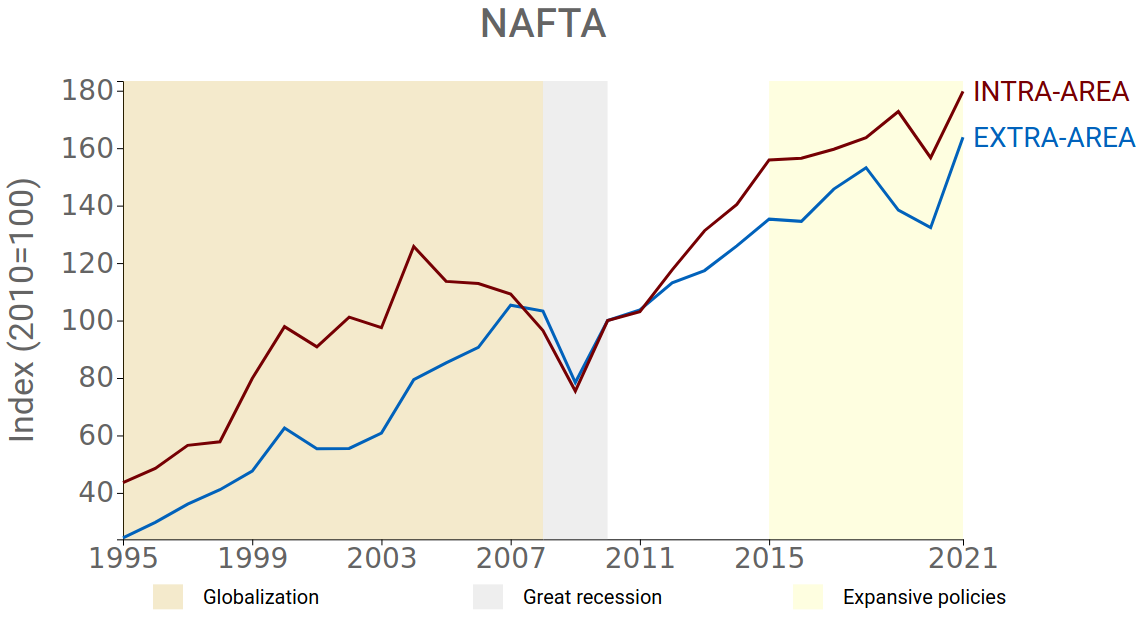 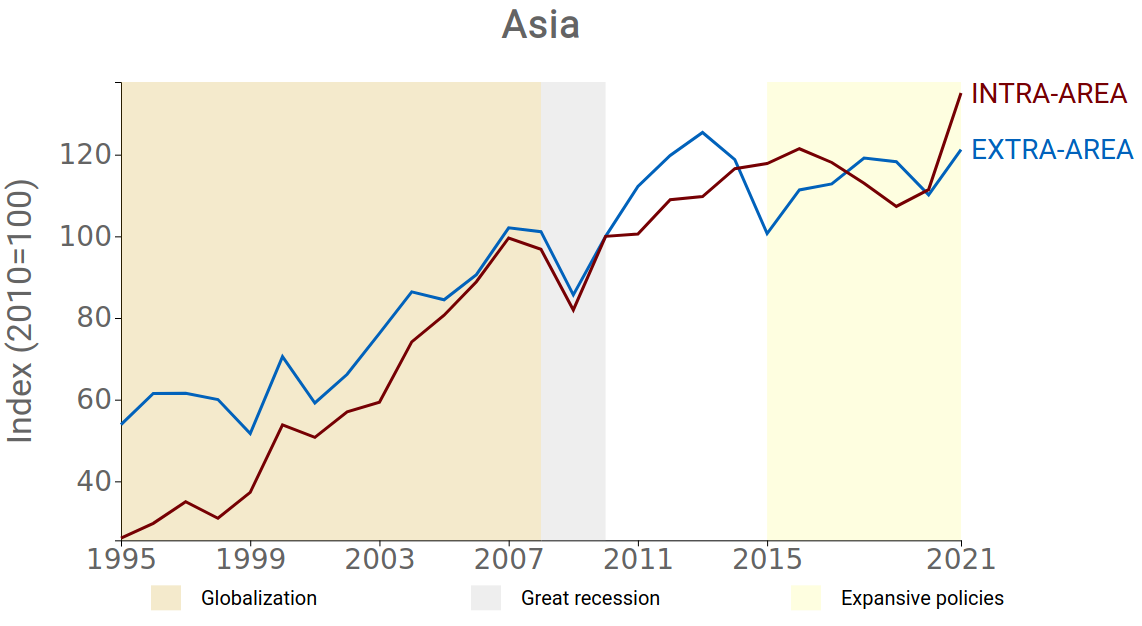 From the graphs shown, it is evident that in both the NAFTA and EU areas, Intra-Area trade growth is showing more accelerated growth than Extra-Area trade growth. However, this is not the first time this phenomenon has occurred, but a larger gap seems to be opening up precisely as a result of the Great Recession. Substantial balance reigns in the Asian region, although Intra-Area trade has risen significantly in 2021.

From the analysis just conducted, we can say that globalization as we have experienced it in recent years is slowly changing. The pandemic crisis of 2020 exposed the weaknesses and risks of a production system based on highly fragmented value chains. However, that of regionalization still seems to be a slow process, of which only weak initial results are visible. In the near future, it will be interesting to keep this phenomenon monitored, including through more sophisticated tools, in order to see whether this paradigm shift is becoming more pronounced or, over time, will come back.