In the first six months of 2022, in the face of widespread declines (especially in the Chinese market), the US market grew significantly

The Mechanical Engineering industry, consisting of industrial tools and equipment1 and products for industrial plants2, is showing - similarly to what is documented for the Machinery industry3 - a significant slowdown in the pace of development of world exports. 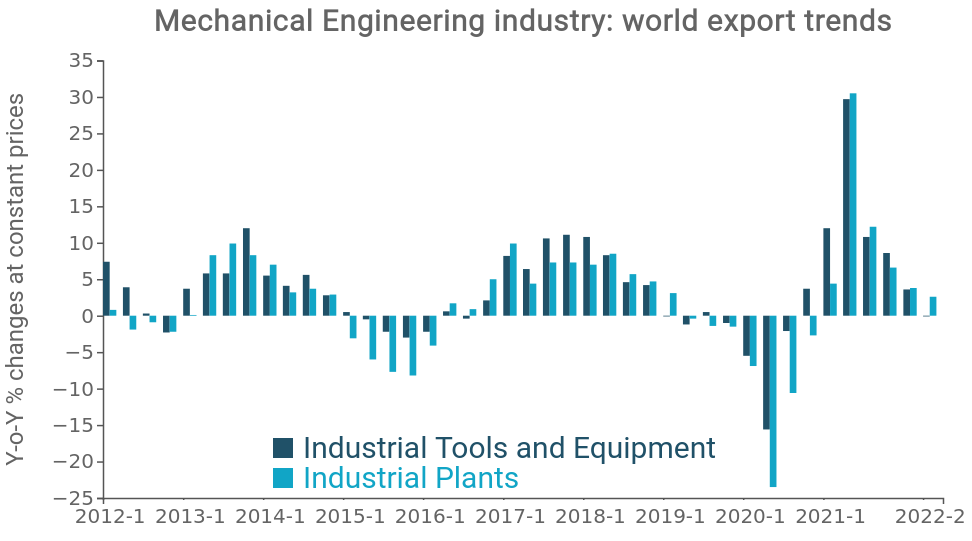 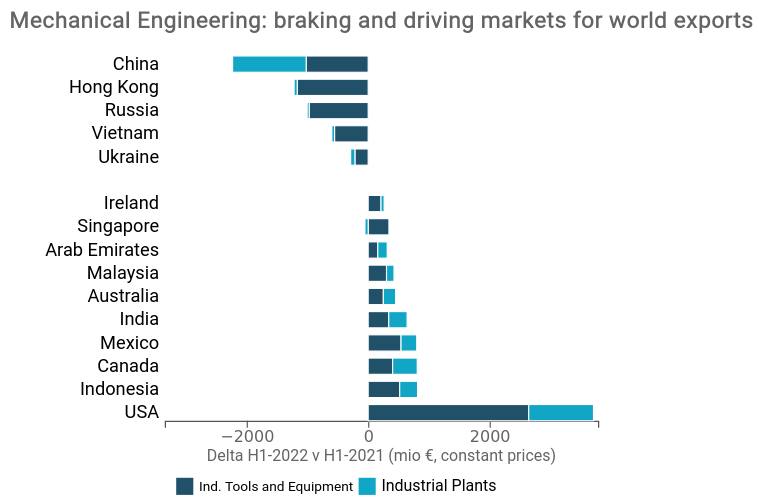 
In the first half of the year, in the face of an overall result of moderate trend growth, a 42 percent of world markets of Mechanical Engineering showed a negative performance in changes at constant prices.
The main braking market is represented by the Chinese market, which in the first six months of 2022 marked a downward trend in sales from the world - measured at constant prices - of over 2.2 billion euros (-10.9% compared to the first half of 2021), almost equally attributable to industrial tools and equipment (-1 billion euro, equal to a decrease of about 8 percentage points) and industrial plants (-1.2 billion €, with a reduction of over 16 points percentages compared to the first half of 2021).
In addition to this significant decline, there is the negative performance of world exports of Mechanical Engineering aimed at Hong Kong, essentially concentrated in the industrial tools and equipment, which shows a fall close to 1.2 billion euros.
Even the cases of the Russian market, with a trend decline at constant prices of about 1 billion euros in world sales (equal to -17.7%), Vietnam (-0.6 billion euros, for a contraction close to 18 percentage points) and Ukraine (-0.3 billion €, equal to over 38 percentage points) are also strongly affected by the negative performance of the sector industrial tools and equipment, compared to a higher relative sealing capacity in the industrial plants sector.

On the other hand, within the 58 percent of world markets in trend growth (at constant prices) in the first half of the year of the year, the sustained growth performance of the US market stands out: in the first six months of 2022 industrial tools and equipment aimed at the US market recorded growth (normalized by inflationary and currency effects) of over 2.6 billion euros (equal to +9.8 %, only slightly attenuated from the + 16.2% annual average of 2021); those of industrial plants a trend increase at constant prices close to 1.1 billion euro (equal to + 11.6%, less than 3 percentage points lower than the 2021 average rate). The US market therefore highlights the continuation of an expansionary phase of the investment cycle for industrial processes, consistent with the context of low unemployment that still characterizes the economy.

The slowdown in progress in the world demand for Mechanical Engineering products is affecting in a particularly differentiated manner the various international markets. There are two emblematic cases in this sense: on the one hand, the sharp reduction in world sales of Mechanical Engineering aimed at the Chinese market (in slowdown of 18 percentage points, at constant prices, between the 2021 average and the first half of 2022); on the other hand, the holding of growth at double-digit percentage rates (at constant prices) of world sales on the US market.

In an international scenario increasingly marked by downside risks, and with a highly differentiated articulation of dynamics, as demonstrated by the dynamics of the international markets of Mechanical Engineering, continuous monitoring of economic information on foreign trade becomes more and more relevant for exporting companies, in order to optimize strategies and investments in international development.